Switched it up a bit:

Rainbow meant all tiles did something (esp. With -44 dd from eigelborch and att+ from bertulf). Telluria made a decent meatwall of minions.

I came up with Bera, Azmia, Franz, G Falcon and Dr Moreau

Dr Moreau made Joon and Justice miss their special Skills 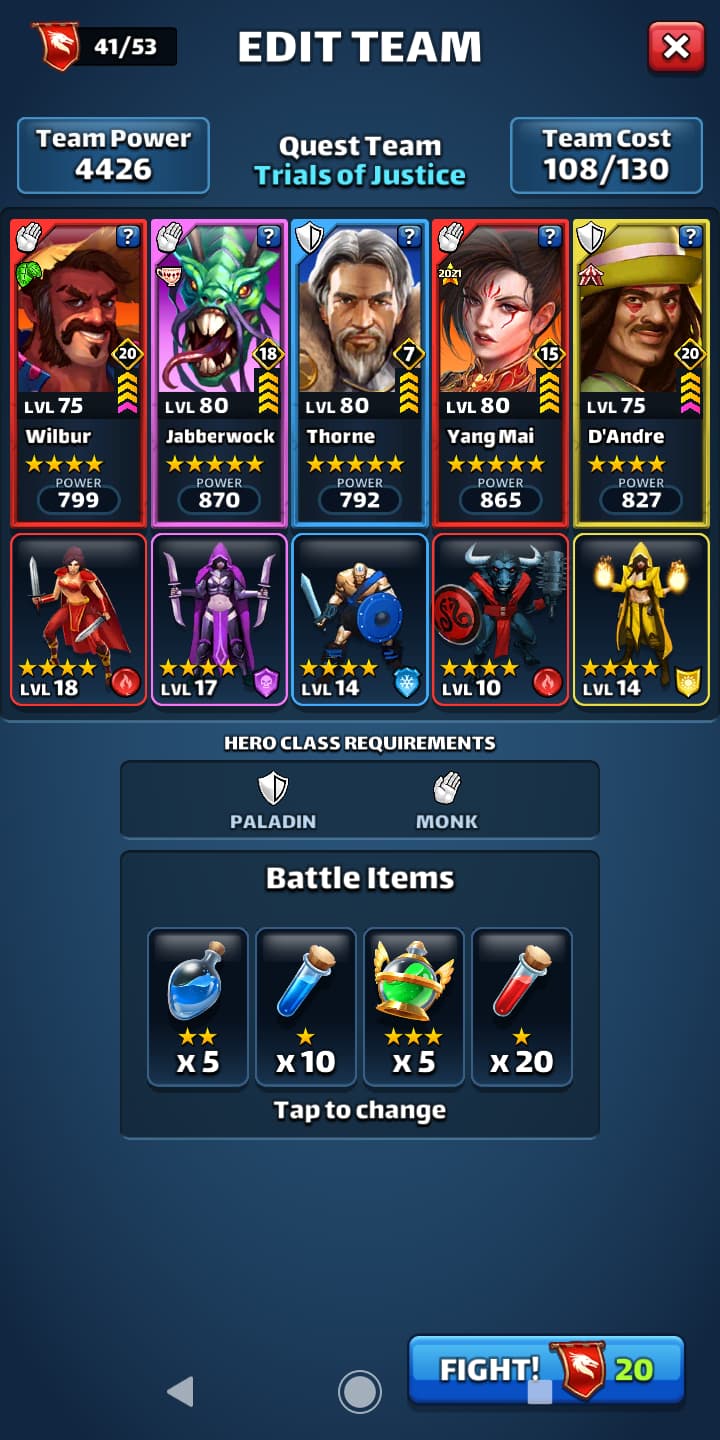 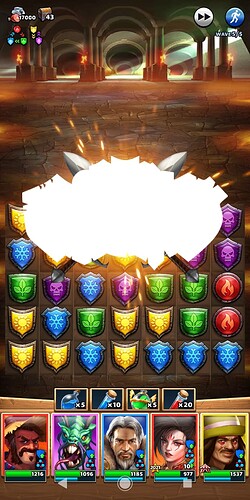 Monk save padalin and trainer to kara

Nice and easy. No deaths and no items used

After last time’s attempt with Franz/Tettukh, which went ok, not great, I realized I could bring Wu’s costume which I just finished, so thought this would be a good place to try it out: 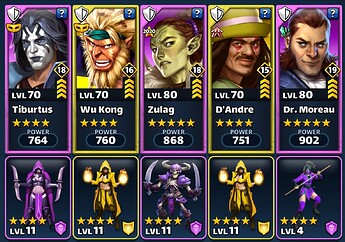 There’s Wu in costume, and I said I would bring back Zulag. Moreau to +19. My alliance switched to purple tanks, so he may go to +20, as I’m currently trying him out as tank for war, but that’s a lot of emblems to commit to. 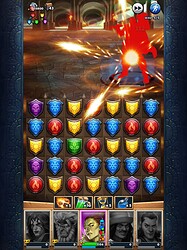 This looks way worse than it is. Although, that’s mah Zulag, last one standing, no surprise there. After the opending salvo, the board dried up for a very long time. Joon hit Wu three times in a row. the first time Zulag’s protection was up and barely did anything. the second time i had been holding on to D’Andre’s heal and brought him back with that. the third time though, i had nothing and a one-two Joon Justice whack offed Wu and really put a hurt on most of the team. The bosses were all at like a quarter health though so i wasn’t too worried. i got everyone charged again but another round of boss specials picked off everyone but Zulag, who had her protection up. tiles finished off each of the bosses shortly thereafter though and i didn’t have to use items. Glad I brought back Zulag.

Paladins saved for Moreau or Franz, Monks to Wu. Trainer to Jackal.

also, this happened right in wave 2: 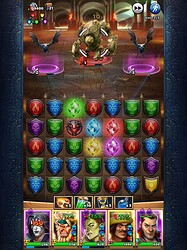 Yang out franz in … No items … 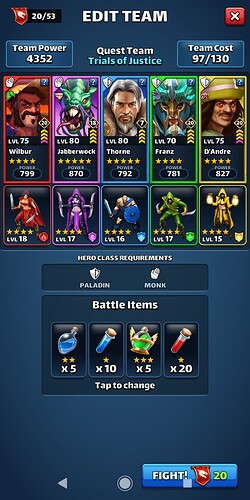 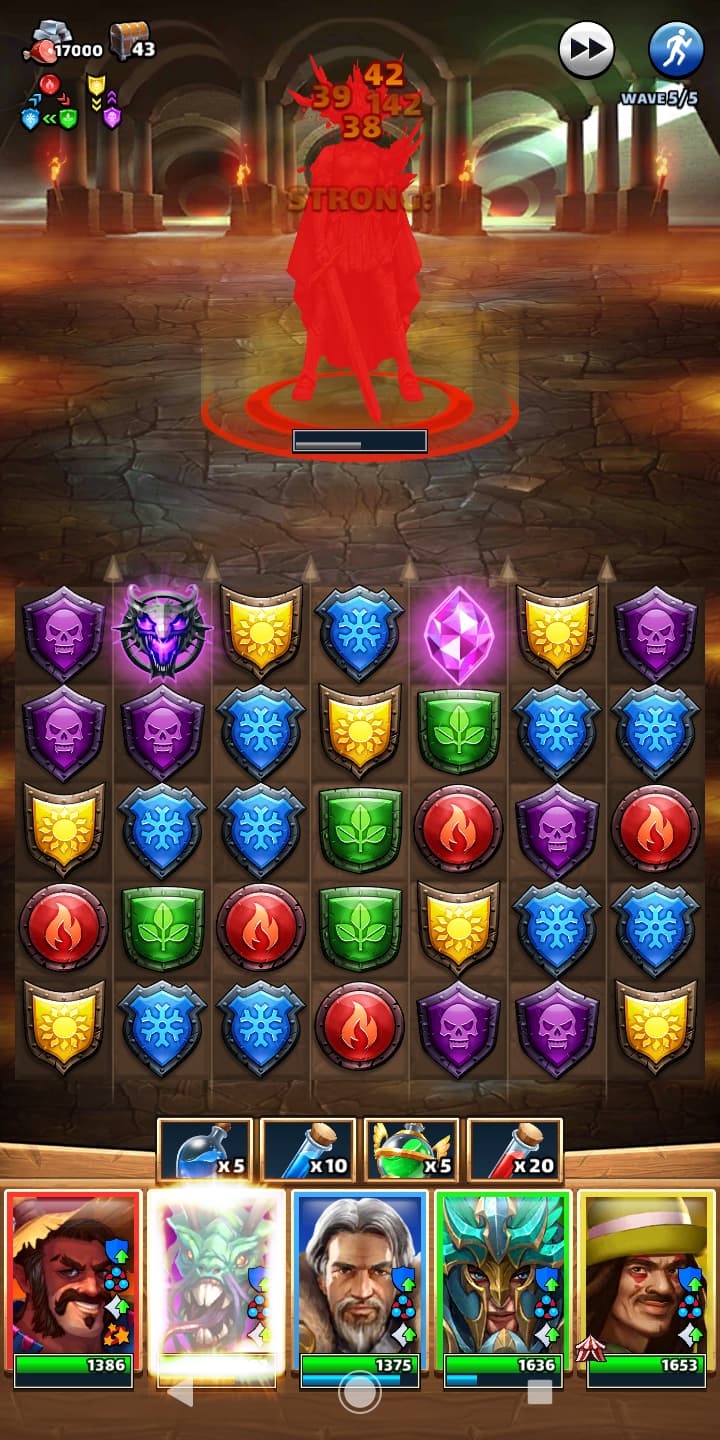 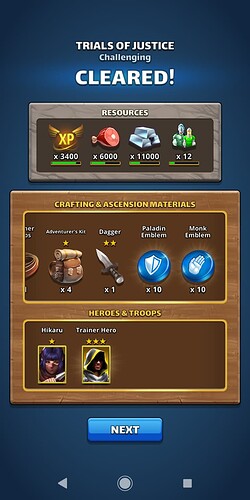 Compared to last time, Thorne is up one node and has his full costume bonus. Also, swapped out Joon +19 for Richard, since Joon is weak to two of the bosses and Richard is a sturdy dude.

Waltzed through the mobs, spamming Heimdall’s overheal. Entered the boss wave with all specials charged. Nothing too special there, either. Kept looking for blue matches and was able to hold Raff to clear Justice’s blind. Each boss fired once, but no real issues here.

I just finished both Azmia and cCyprian, so I decided to roll the dice on another double riposte team and bring back Wu too: 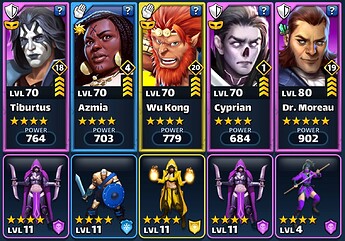 maxed Wu and +20 now because i got his costume, but here he’s coming in base form for tile damage. Azmia will get more emblems soon. Cyprian probably not, too much competition for paladin emblems. 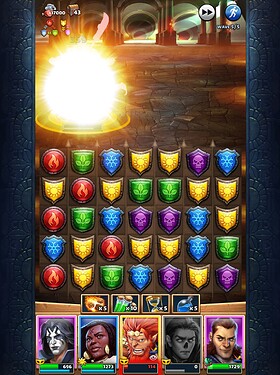 not bad, not bad at all. no items. Overheal is great for double riposte teams, but if anything Wu made me tear through monsters too quickly and i was only at about 1.5x health when i got to the bosses. I lost Cyprian because he took an early direct hit from Richard, and without the riposte up, otherwise Richard would have died a lot sooner and not gone off like three times. Joon hit Wu while Azmia’s riposte was up and smacked himself for half his health worth of damage. Justice did the same thing while both ripostes were up. This actually went pretty quickly, and Cyprian died right at the end when the bosses were almost dead (you can see Moreau still has his riposte) so i wasn’t worried about making it. with Wu purple tiles just ripped through the bosses. Happy to declare another double riposte team a success.

Azmia’s helped changed my mind about riposte heroes, she’s such a good hero, monks will go to her. Paladins either to Moreau for his last node becasuuse he’s currently my tank for wars, or to Kara. Trainer to Li Xiu’s costume.

Like @Sam-I-Am , I just finished Azmia. I instantly LB’d her and got her to +20. She is working out great.

I don’t typically mono, but I noticed I could make a really solid blue mono team, which is pretty unique for me on these trials. Usually if I went mono they would be a team that makes no sense. Here was the team:

Team worked really well. Between Azmia and Raffaele no one got to low health and Azmia could easily take riposte hits. Perseus’s EL ensured everyone was charging fast, piece of cake.

I may have used an antidote for blind or something.

My old team had Joon and Leo, but I stripped Joon for Azmia and out the rest on Raffaele as I noticed I rarely use Joon anymore. 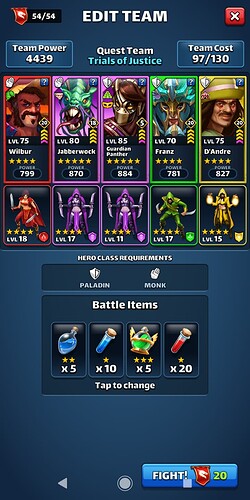 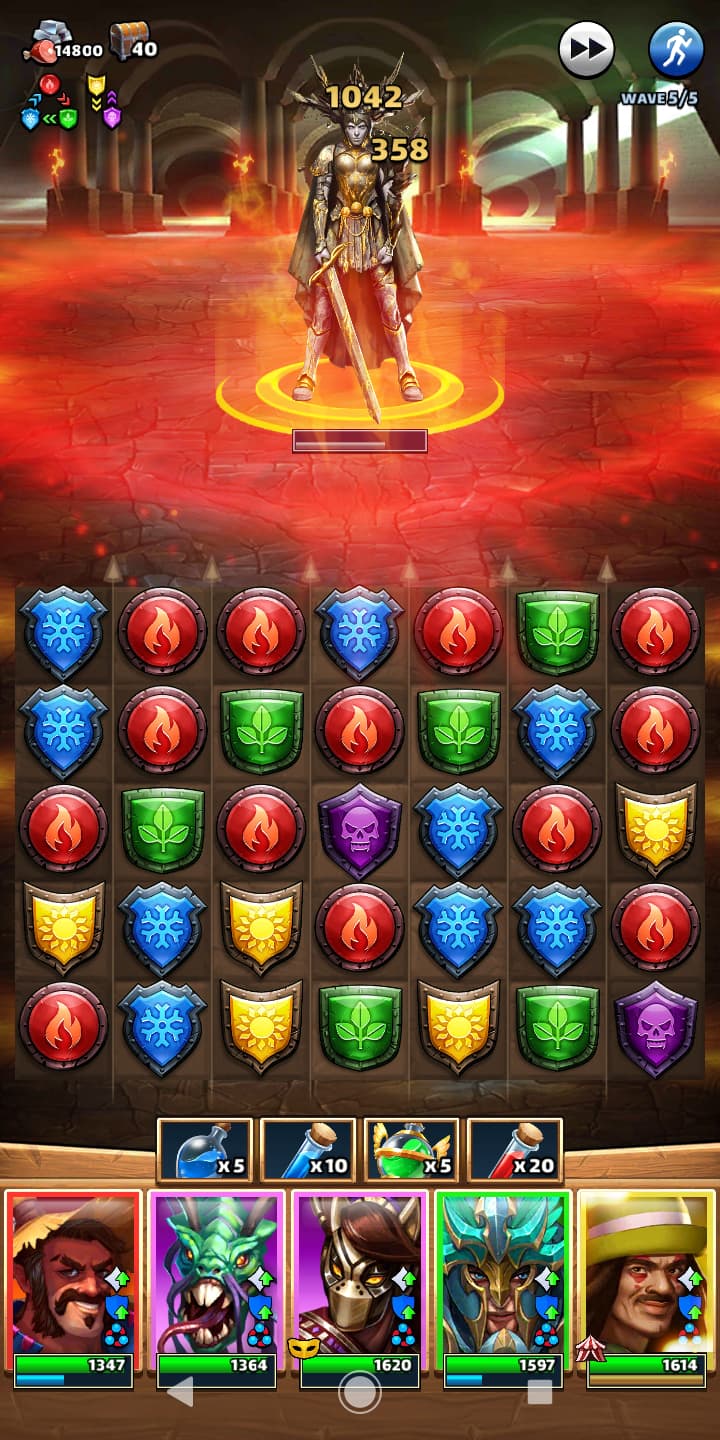 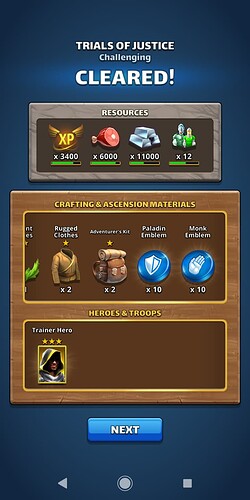 Mobs were not a real problem; they serve mainly to allow me to spam Heimdall’s overheal in preparation for the bosses. Entered the boss wave with all specials charged. Heimdall reversed Richard’s attack buff, Raff dealt with Justice’s blind-to-all (which is the main reason I even bring him to this trial), and Joon has a propensity for targeting healers with his blind. Combine that with a pretty steady diet of blue tiles, and this wasn’t too bad. 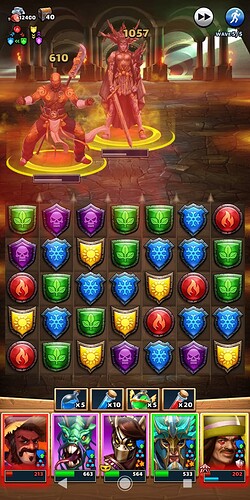 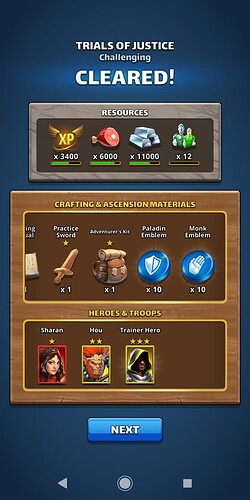 I did this while half asleep and almost failed - that said I also did my last war hits and did badly half asleep, and did 2 titan hits with a red team against a red titan… yeah folks, don’t play this game when you’re half asleep haha

The boss on the final stage started out great, I had everyone charged and had a couple of diamonds. I got all of their health to below half and then I got no more colours needed (red and purple,but LOTS of greens)… i used 2 minor antidotes to get rid of blind and -attack, then Joon killed Wilbur.

today i tried a variation on the double riposte team from last time: 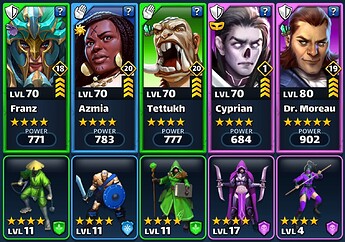 I thought this would be a fun. Strong colors against the bosses, and Franz amplifies riposte damage and Tettukh’s poison. 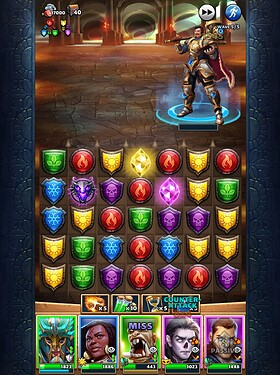 Yep, this was a blast. As in the bosses all blasted themselves to pieces. Tettukh looks a little beat up, but that’s because Joon hit him. but with Azmia’s riposte and Franz’s damage amplifier, Joon also whacked himself for 80% of his total health at once. that was neat. thanks to Tettukh’s silence and a nice hole where Joon used to be, i managed to charge everyone up again before Justice and Richard, so i just let Richard and Justice go off and finish themselves. so yes, i’d say this worked well.

Paladins saved and trainer for Kara, who’s really close to being done and might come the next time this rolls around, but i’d have to really switch up the team for her, taunt works counter to riposte. Monks saved, or maybe to Joukahainen.

omg, this made me laugh. i’ve had so many terrible half asleep war hits on Wednesday and Sunday mornings that i promised myself (and my alliance) i would drink an extra cup of coffee before i take my war hits.

Same team as last time. Raff is up five talents.

Per usual, had basically double HP by the time I got to the bosses. Entered the boss wave with all specials charged. This one is never going to go quickly, but with this team, it seems to go smoothly. Raff was ready to reverse the one time that Justice fired. Richard fell first, then Justice, and Joon last.

Paladin emblems get the last node for Captain of Diamonds; now I can start saving them for D’Andre. Monk emblems take Raff up a node. Trainer hero to D’Andre.

I said last time i’d bring Kara and mix up the team, so here it is, the Flaming Hot Clown Car of Justice (because face paint and masks and costumes and fireballs and paladins, lol): 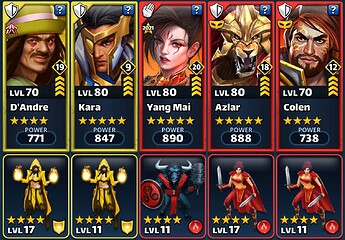 Kara up to +9, trying to eventually get her to 19. I had been meaning to give cAzlar more as he’s on my rush defense, so he just went up to 18. cColen from 4 to 12 since i just got a bunch of fighters from CF. so many fighters that need emblems though. 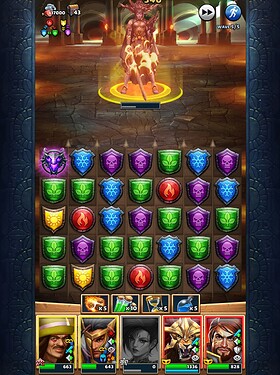 this looks worse than it was. started bad when Joon resisted Colen’s burn, then after a few turns of good board, it turned pretty dry for a little while and Kara’s taunt wore off right as all the bosses charged and YM took a 1-2 punch from Joon and Richard (always amazes me when one hero gets targeted like that, 4% chance that will happen) and she was out. but the bosses were already low health and the tiles all showed up again the very next turn, so one more round of specials finished it. let me just say, Kara sure can take a beating.

Paladins for Kara, Monks saved i guess? Trainer to Vivica.

This was simple enough.
I did have to use 1 minor antidote (actually I didn’t HAVE to, but I decided it was best to - Justice AND Richard both went off at the same time, both were almost dead, so I thought it’s better to be safe than sorry).

I remembered this time to ALWAYS use LOUHI before Wilbur.