As much as I need more firepower, I was afraid to drop to just one healer, so I swapped my new C. Magni in for the uber-fragile Gafar instead.

Mob wavs went OK, as usual. Entered the boss wave with all specials charged. Wow, did C. Magni seem to make a difference here! I actually thought Vivica was going to die first, both because Magni has to target her to give def down to all the bosses, and because with the ailment applied, tiles actually do noticeable damage to her. I didn’t think I had an exceptional board, but I was able to keep the def down ailment on for the whole boss fight, and for once, it actually felt like the fight didn’t take forever. Eager to run this one again and see if it was just my perception or an actual upgrade to my team. For now, Viva la Magni!

Druid emblems take Mielikki up a node. Cleric emblems in storage, most likely for Rhys, even though I have to knock out a couple of shorter yellow projects before I start to feed him. Trainer hero to Shrubbear.

Simple and no items were used, but wow that was slow at the boss wave.
Horghall went off twice, but luckily I use Zikimtha so no problems. I always try kill Horghall first, which I did, then Boril, then Vivica

Just finished Zhabog, thought i’d take him for a spin, along with these folks: 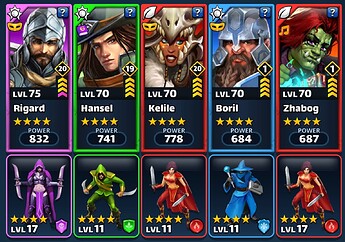 the idea being you hit ‘em with Hansel, and then Kelile, and then Zhabog, in subsequent turns, and you get a couple extra turns of mana control and burn. 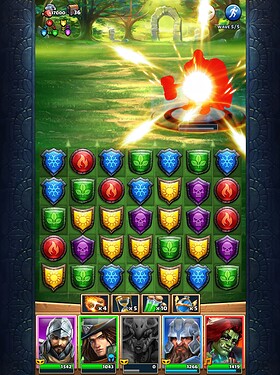 well, mana control only works if it’s not resisted, which Vivica did every single time i hit her with Hansel.

Burn only works if, well, if you’re not dead. I swear. cKelile always kicks it so fast in the trials. maybe it’s bad luck with slash attack targeting, i dunno. anyway, this doesn’t look so bad, but i was close to losing everyone here at some point. threw a bomb right before Horghall went off so i wouldn’t lose. Took him down relatively quickly, then it was a slow slog of ghosting tiles and whittling the other two down. i’ll definitely try something different next time. Zhabog has a nice hit, though, for a 4*, so that’s cool.

Druids to Mielikki who’s almost to 20, then we’ll see who’s next. Clerics saved but probably to Alexandrine. Trainer to Shrubbear.

KH Out ©jabberwok in … rhys LB No items 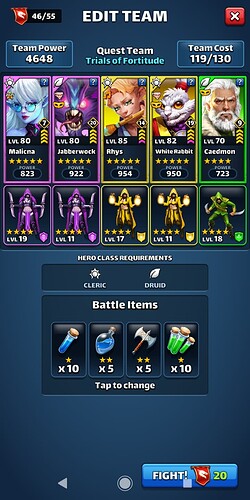 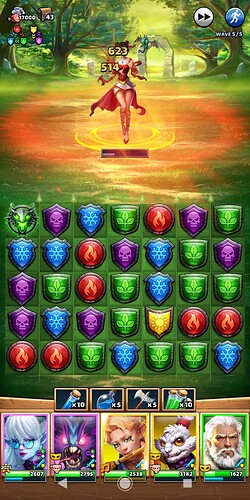 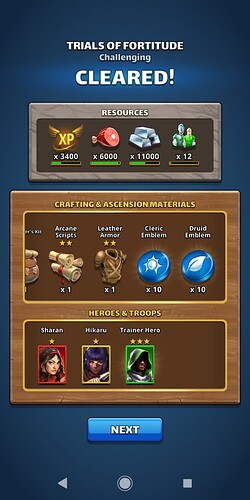 Same team as last time. Magni is up one talent.

Mobs went OK. Entered the boss wave with all specials charged. The board really turned against Boril, so I obliged by bringing him down first, although he’s the least dangerous threat, and I prefer to go after Horghall early since I can’t cleanse his effect. As predicted, the attack down made this take longer, and Viv fired a few times, but I eventually ground out the win.

Druid emblems to Caedmon in anticipation of superior talents. Cleric emblems in storage, probably for Rhys. Trainer hero to Orla.

Same team as last time. Magni picked up his superior talent this week.

With my fast hitters, I chose to use specials liberally in the mobs, which didn’t let Gullipig fire as often. No matter. Entered the boss wave with all specials charged. And the tiles kept coming. And coming. And coming. They came so fast that, after hitting Viv with Hansel the first time, I didn’t have time to charge him up again and counter Horghall. Turns out, he was the only boss who fired the whole match. Tile damage especially worked on Viv, and I was shocked she didn’t fire. Made the trial super quick for the first time… maybe ever.

Cleric emblems saved for Rhys. Druid emblems maybe for Kadilen’s superior talent. Not sure. Out of good druids, actually. Trainer hero to Silvaria.

Easy but i did use 2x minor antidotes because of Horghall

Same team no items rhys is up some bling 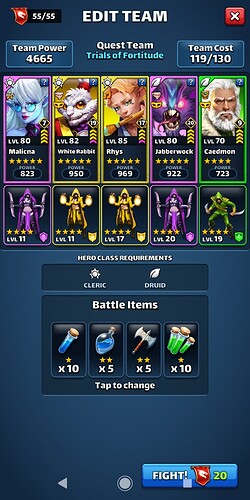 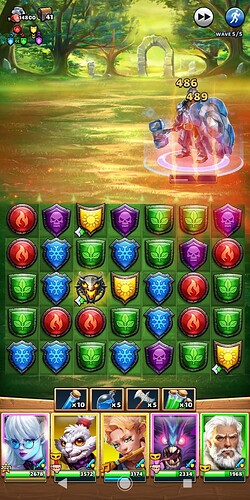 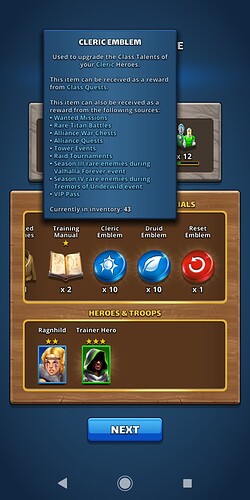 Trying to catch up on trial threads. Brought this team because Superior Talents! 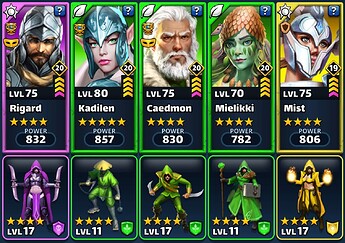 and also Mielikki because she’s awesome, and i just recently got her to +20. that mana node makes such a difference. Caedmon had sat at +18 for so long, but superior talents were just the thing to justify giving him the last two nodes. 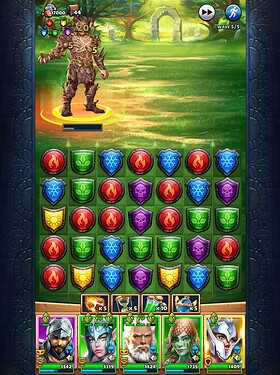 this was minion city from start to finish. i brought Mist back since i don’t have an attack booster, and SS def down helps Kadilen do some actual damage with her special. still took a little while but no real danger with a wall of Mielikki minions, Kadilen’s SS defense up and Rigard constantly charged just in case.

Druids to ?. not sure. Zhabog maybe? Clerics to Alexandrine or maybe some to Ana-Belle.