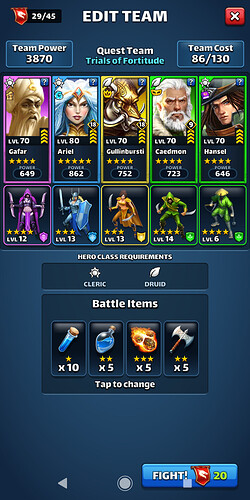 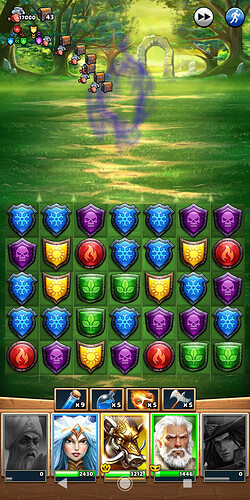 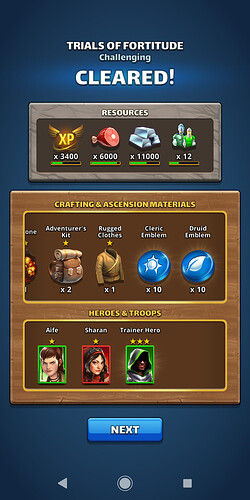 Seemed like a good day to try out some new toys. Vela is up two talents from last time, and Melendor +20 and Rigard +20 are out for Queen Sabina and Chao. These seem like great tools to counter Boril and Vivica, but they do leave me vulnerable to Horghall’s attack down, since I don’t have a cleanser.

Mob waves were not an issue. Entered the boss wave with all specials charged. Focused my attacks on Horghall, since I had no way to cleanse his effect, and he’s kind of the only hitter in the bunch anyway. Chao was able to control his mana and Viv’s, while Sabina negated Boril’s riposte. After felling the tree, I went after Boril, while focusing mana control and healing debuff on Vivica. Again, Sabina was dealing with riposte, and I’m not sure it was actually active for more than a turn for the whole fight. Boril went down, and since Vivica hadn’t been back there healing the whole fight, she was almost ready to fall as well. Success!

This group made the fight bearable, at least this time around. Costumes, ftw! The cleric mana shield talent could have activated more and been a real pain by negating Chao, but I still think this lineup is the way to go for a while. Trainer to Bertila. Cleric emblems give Hawkmoon a couple more talents. Druid emblems saved for the shiny new Guillinbursti that I pulled on Thursday. 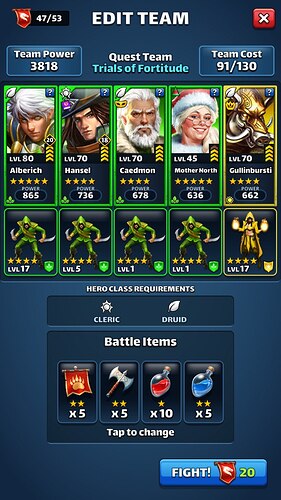 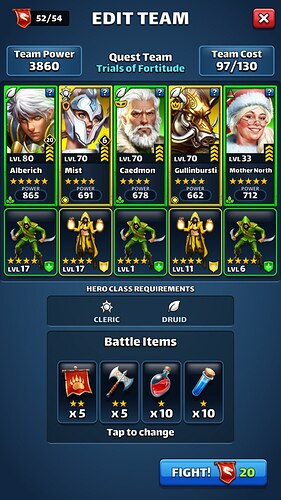 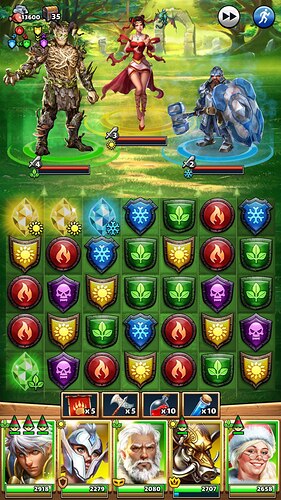 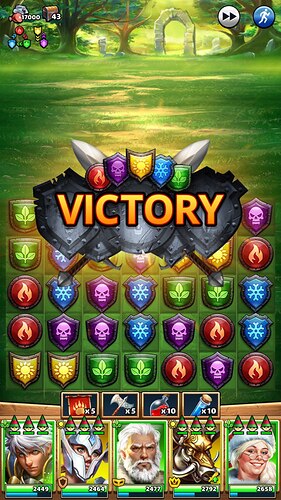 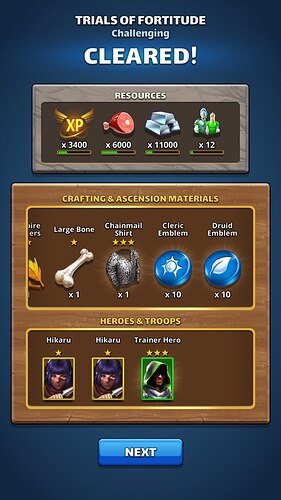 Happy to share that, with my Grazul up, I decided to switch up my team for this one:

Aside from using a couple mana potions, very elated that this was an easy win. Didn’t even have to use Time Stops to keep Vivica from healing and cleansing them of my debuffs. And was a definite progression from my old team setup:

Now, I sit with 4 trainers. Might end up dumping them all in Kadilen. Might decide to put one or two in Buddy to get him maxed already. He’s fun!

with Mist blocking riposte and def up, it was a joke. It only took a bit to face lastwomanstanding Vivica without a hitter, but no big deal at all.
Emblems to Gullinbursti, absolutely, and probably to Rigard#2.
Trainer to Melendor #2

Caedmon (no emblems) - Gullinbursti (20) - Boril (18) - Rigard (none) - Mist (none). Boril and Caedmon also have their costumes fully leveled, though I did not/could not use their costume versions.

I used the big pig to over-heal before the boss fight and made sure everyone was juiced up before going in. I used a couple of axes to control things a bit against the bosses, did not use any bombs, and used just one minor mana potion to juice Boril up at one point. Even though Boril is a passive hero, his riposte can be just devastating. If you use him, make sure to have him always ready to fire off against the bosses. Its also fun to watch your Boril give the boss Boril a taste of his own riposte medicine! As for Vivica, she is a pain (wish I had her as one of my heroes; still waiting), but her special can be controlled with Mist.

Cleric emblems are definitely going to Rigard. Trainer getting banked for now.

Third trials won in a row - this time a bit harder.

Survived the monster waves with 6 minor mana pots on the healers. Green tiles did normal damage, especially vs the blue birdies. Good thing I had two healers, always a pot or two (never 4) was enough to charge one to full mana.

Facing the bosses I realized it won’t be easy with almost no snipers, two 3*, an unleveled 4* and limited mana control. So I unleashed bomb hell on them, and some green tiles with Brienne finished the job (5 Axes, 5 Bombs, 3 Dragon Attacks used).

Edit: I also tried to steal Vivica’s mana with cChao. Guess what…manashield. That was the final straw that made me pull the trigger on the bombs.

Trainer went to costume of Caedmon, druid emblems will be used later for Caedmon . Don’t really have a good enough cleric as of yet so cleric emblems saved.

Here was the team: 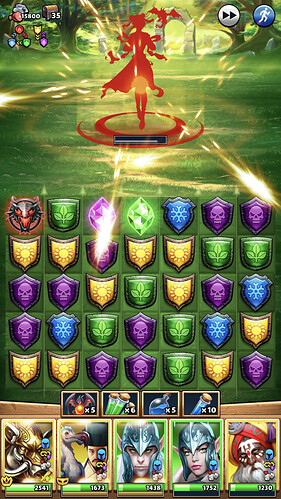 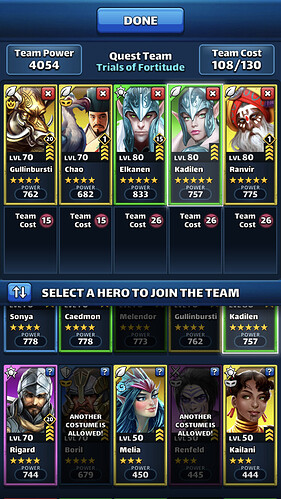 I used this team mostly on a whim and have never brought this team before. It had no dispel so I had a little concern. It actually worked great. Gullinbursti had everyone at nearly double health, Ranvir boosted A @ fast mana, and Chao delayed mana enough.

Boril went down first by design. Horghall next and finally Vic. When I focused on Horghall he probably fired like 4 or 5 times … it just didn’t matter due to the boosted health. Antidotes negated the A drop and the team got on with the show.

Elkanen went up to +16 and Ranvir to +2. Glenda got the trainer.

This was my team this time:

Maybe it was such a passive team, but it worked really well. I was able to get the final stage with the heal if all my heroes boosted and the maximum amount of bees and I could resist Horghall’s special twice. However, when I was about to heal the team, Brienne was hit and died. Not worried as Groot had already died and Boril and Vivica weren’t a threat at all.

Trainer for Almur, cleric emblems for MN and the druid ones for Brienne.

It worked so well that i will stick to this team for quite a long time. Only difference is first boar is maxed to +20.
Emblems will go to Melendor and Pixie. Trainer to Elizabeth

Same team as last time no items used. Everyone survived 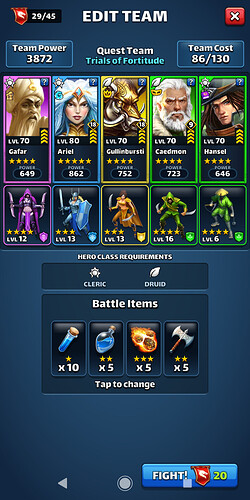 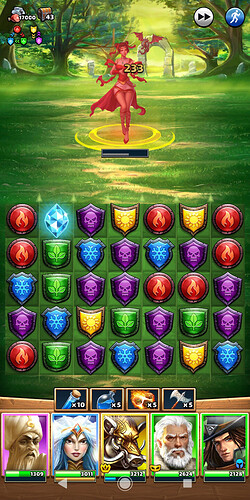 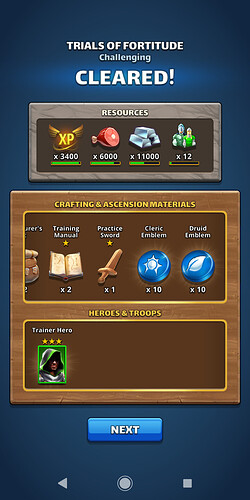 I seemed to take forever to kill the bosses today.
I used 3x Yellow and 2x Green
I barely had yellow tiles, and greens were doing ok but viv was going off and horghall so they made me have little effect so it took what seemed like forever. Other than that it was a cake walk as always

Unfortunately no cRigs allowed, and don’t have Zimmie so no attack buffer. Don’t have either Kunchen, cMagni, or White Rabbit, so no defense dropper either.

As a result this is one of the trials where I really need to work the board for tiles. Board was decent this time, but did need to use two mana pots to boost both cLiannas to get rid of Horghall before he could fire. After that it was just timing Mist right to make sure Boril wouldn’t be able to riposte, and Viv couldn’t give the defense up.

Trainer to Phileas Fogg to finally max him out, emblems saved.

Used a pile of mana pots on the final stage bosses, but none before that.

my Druid and Cleric roster is a little thin at the moment. This is the best I have: 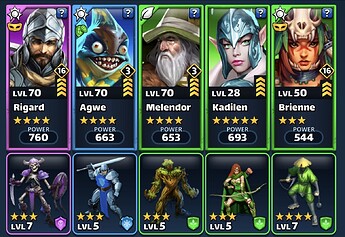 For the final board, would it better to take Brienne in regular, or in costume?

I used the following team (in order):

The big pig makes this one a cake walk. No items used at all. Not a lot of direct damage going on with this group, but it didn’t matter. Groot pretty much blew himself up because of my Boril’s riposte, and Sabina kept debuffing the enemy Boril’s riposte when needed. Vivica was the last one standing. It took a while because of her annoying healing power, but once she was the only one left, the end result was not in doubt.

You gotta love the big pig!!

Just to reply to myself here, the team i posted above did not make it. partially because the bosses took out Brienne relatively early, and then there wasn’t enough firepower to keep up with Vivica’s healing. i took out Boril and did some damage to Horghall at first, but he and Vivica finally killed off the rest of my team and had full health when they did, after like 10 or 15 minutes of launching tile after ineffective tile at them.

I have Boril, Malicna, and Master Lepus in the works, so better luck next time i hope.

Great effort @Sam-I-Am ! You’ll get there for sure

I used Malicna in my team today for the first time even though she isn’t maxed (41/80 +/-). She was my only hero capable of dropping enemy D in the 4* or 5* class. She was effective. Sounds like you have some great other ones coming up too.