For anyone who has flasked ahead to the impossible section, can you confirm restricted classes split in that section?

restricted classes split in that section?

What do you mean ?

In Beta similar class restrictions was on Impossible as the Normal questline.

Here are the first 2 restrictions 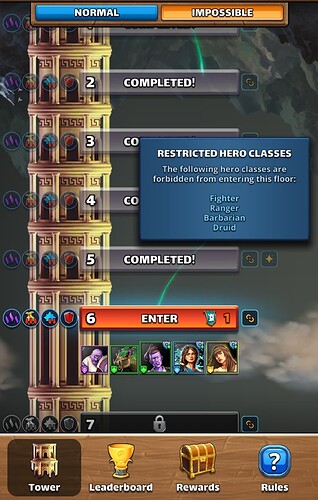 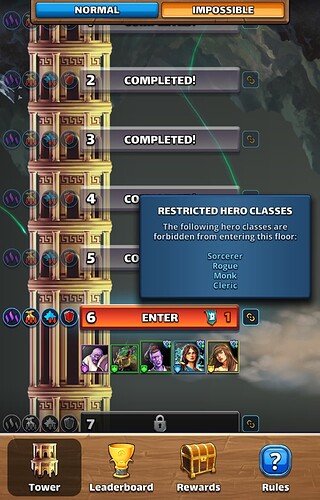 Be warned though. The difficulty amps up a lot in impossible. Soul Grasp does almost 1k damage

It was this part. 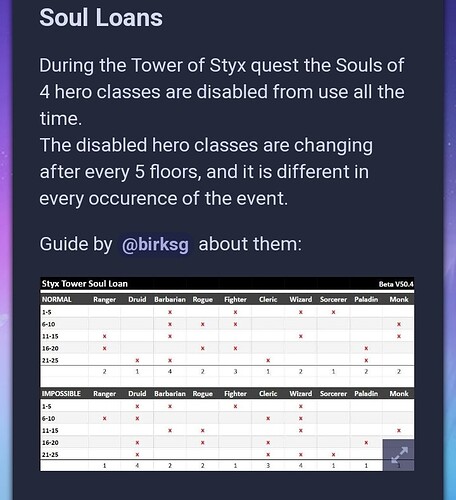 It matches what you guys had in beta, but for example the levels in first 25 has different class restrictions for live event eg sorcerer. So I was wondering what the restrictions each 5 levels are in impossible in case changed from this there too? 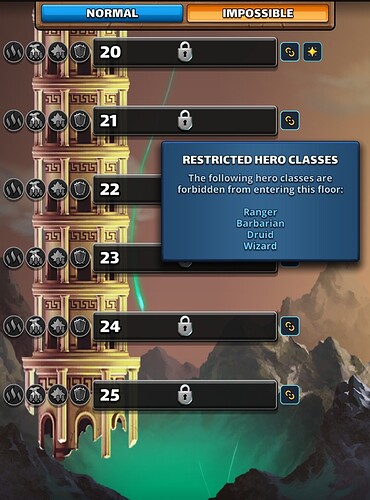 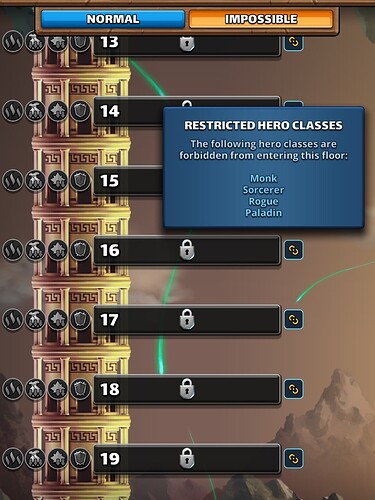 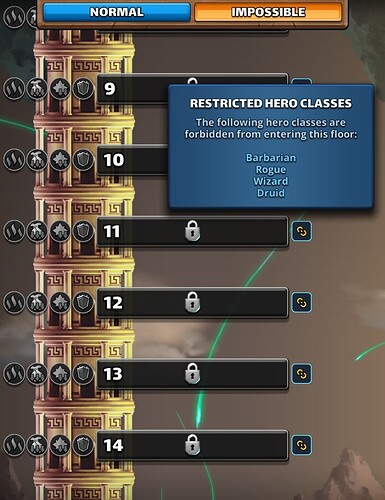 Thanks @Liam_K that lets me get planning. Don’t like the sound of the 1k damage. Will need to come up with a roster solution for that…

Garbage after completing Tower, not worth it. Next time I’ll skip this middle finger event. 6 summons, garbage, 20 troop summon, garbage. I don’t see the fun of this event!

Thanks @Liam_K that lets me get planning.

Tell me about it. The 2 heroes I lean on most for the heavy damage in events : Khagan (Ranger) and Pengi (Druid) are both not allowed in the last 5 toughest levels

As F2P I Scraped some tower coins together from previous tower event and the first 20 floors of this event.
And it gave me Nemesis, not bad at all. Will take some time to level her up, because I’m out of backpacks and food, I do have the mats, and since I don’t have mana control hero’s she is a nice addition.

Apart from this it’s great that they got rid of those curses in this tower event.

Yeah, no druid when I’d been planning on Gazelle and Gillipiggy for those ones will be tough.

So far I have enjoyed this tower more than ninja and magic towers.

Removing the curses promotes a less stressful gameplay. Yeah, those hand bombs hit really hard if you let them go, but at the same time you know you can heal and get back to full health so you don’t need to desesperately use tornadoes to fix the board and match them. With curses, once you get to the curse limit for a hero, it’s game over for that hero.

Also the new soundtrack refreshes a little bit the atmosphere of the game. I like it.

Did 121 summons for troops and 55 summons for heroes. Heroes got me Marjana (c’mon!) and all 3* + 4* event heroes, but troops gave me only 2 Cyclops troops and even that the same one twice (AAAGGGGH!

). I hate this game, lately summons are complete crap.

I like the event though. The music is actually pretty good for once, the removal of curses helped, though appearance of multiple damaging tiles makes it challenging still. Also nice that one can complete it without forking gems.

Yeah the 1k damage is literally destroying my team. I’ve failed once so far. But also because if the bosses hit, they hit super hard.

Im at about 58 coins. I would love to get to 100 again for another free pull then im a happy chappy

I’ve played the 20 levels. Survived so far but I’ve been focusing on having 2healers in my team and taking crit chance blessings to get the extra damage needed for bosses

Just wanted to say that i have enjoyed playing Styx Tower mych more than Ninja and Magic tower. Not sure if it is just due to having a new mechanic or bombs/ blessings being better than curses. Or it could be the possibility that I have a shot at completing the tower without spending gems, though by the way some boss waves are hitting - the lower levels do not look too promising. Happy gaming!

This event is both less challenging and (somehow) less fun than the other tower events. No losing heroes for the event, but the class restrictions is in place for a bit of a challenge. I have a deep roster in all classes so I’m good to go there. Bombs aren’t that big of a deal. Bring an overhealer or two and some good offense and you are set. Cruised through the first 25 levels without using premium items. Same with what I’ve done on the impossible levels so far. Just a time suck which means it’s kinda boring. And the loot for finishing each impossible level isn’t good. No idea where I will land on the leaderboard. My play style is slow so I never finish too high in these. Hoping for Top 5000. I dunno…just not excited about this. Just a big ole meh event, imo.

@EarlVerdant For me it is quite the opposite, I like this event more than Ninja and Magic Tower, mostly because of reason why you don’t like it - I’m not afraid of using my heroes. As person who don’t have big roster previous towers always came with fear that losing even one hero will make me lose entire event. Also feeling that Impossible Mode was behind paywall always made me feel dull.

I think SGG achieved sweet spot with towers - Ninja and Magic are challenging and fun for people with deeper roster, while Styx is easier one for more average players. And I say it’s good, both sides should have possibility to have fun.

Agreed, because once you get the right heroes and buffed up enough for the blessings, ninja and magic towers are a breeze. I used to run through to level 50 with my two carols and Franz. But with this hero limitation, I have to adapt and use other heroes. Hero restrictions is so much reasonable in this tower
Not sure if this statement is true, but I have seen more diversity in heroes for the top teams as well and it’s not the same bunch of heroes that always dominate such events at the top

I got baited by the 3% mana regen on special casts. Absolutely not worth it with the lack of mana regen boosts overall and the likely chance that there won’t be a second upgrade of the same type to stack.

The blessings in general seem to have very little impact in this tower, which makes it feel slower. On the plus side, the lack of constant mana gains, stacks and frantic spamming of actives means it doesn’t lag like the other towers.

likely chance that there won’t be a second upgrade of the same type to stack.