I found Sif to be my savior in the last stages. She literally blew half of the HP the enemies have upon counterattack, at the same time protecting my guys from getting dead twice in one shot. The levels with Hypnos were more challenging because of his priority dispel. However, Hawthorn and cAlby combo charged my guys almost instantly. Nonetheless, it was an arduous task.

I think they need to reduce the buffs that the bosses get since our blessings have been reduced. At least half of the time spent is in the boss wave.
When your strongest heroes hit for only about 600hp damage, it will take some time to wear them down without counter-attack.

Congrats on pulling Nemesis, I know you really wanted her! I pulled two Erebus and a dupe Hypnos on my main, and then two Nemesis on my alt, wish I could spread it out and trade between accounts lol.

Still unfortunately a slog with impossible levels taking 10-15 minutes each. All in all, the event requires too much play time for my taste, and you need to do it every day too. I doubt I’ll bother with impossible again.

Wow. What a refreshing change to actually be listened to for once. A Tower you can complete without needing to buy flasks!!! No, I didn’t actually get to finish. Yes, I did find the difficulty too hard for my level 90 roster, though maybe it was just my main overhealer Heimdall was prohibited at a poor time, and my Gullis just didn’t have the same impact.
But it was just so excellent to know I had been given the energy to complete this tower, instead of having to pay for it. I don’t consider my inability to finish a huge failing, certainly far less than the other towers that are paywalled. My enjoyment and effort put in certainly was much higher than any tower event since Ninja tower was altered to be paywalled. A very welcome change! And no curses, so having characters only temporarily prohibited instead of ‘hey you can’t match two of these, sorry, you’re out’ was much better.

Yes, levels do still take too long and the distribution of energy, eg no carry over from day to the next, is mildly annoying. But I’m going to focus on the positive changes, and hope more keep coming!

Styx certainly is different from other the other towers. I think it’s much harder since bosses reflect defense down, have huge sniping damage (one shot kills), and have heroes like Hypnos dispelling first and buff blocking.

I came to realize I prefer the curses! I prefer the curses because I have a fairly deep roster so I can waste worst heroes early on and save the important ones for later levels. I like the change to the strucutre that loaned souls. It was a cool idea to force variety. However, someone should do a count on heroes disallowed. It doesn’t feel equal by class.

I really messed up some blessings by choosing crit boost. I didn’t realize how little tiles would help me here.

Made it to floor 22. Had my entire team wiped in one turn (one boss special, 2 slash attacks) and decided that I didn’t want to spend another hour for probably the same rank. 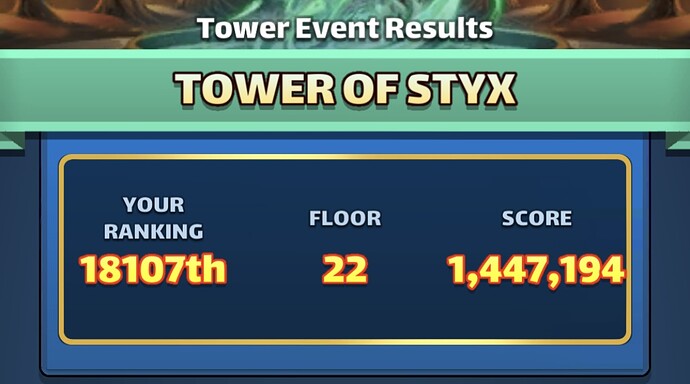 Lots of folks came out to play this one. 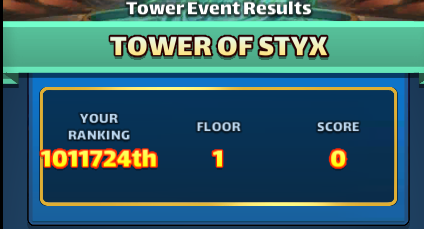 But it was just so excellent to know I had been given the energy to complete this tower, instead of having to pay for it.

excellent point, and this also helped make me enjoy this tower more!

I stopped at 18. It was taking too much time per level. It was nice that it was soooo hard but the event is super tailored to those rosters that have overhealers. That’s not to say those that have more limited rosters can’t do it, many here have, and massive congrats are warranted.

I think the ‘250hp under 50% mana per turn’ blessing not working as described was a killer for me and really tarnished the excitement for me and left me with a ‘blech’ feeling. I read that as ‘if my heroes have less than 50% mana they will receive 250hp every turn.’ This was a great way to help reduce the 1k damage from soul grasp and the 700 from normal monsters in the later levels, if it worked. The way it worked seemed to be TOTALLY random so I couldn’t rely on it. If it was working as intended you should clarify the intention. If it was a bug, then this feels pretty unacceptable to me at this stage.

The bosses need lower defense the next time. Probably not lower HP as riposte is already powerful enough. The last stages 5 stages took at least 10 minutes each. The class restrictions already force you into teams with not so great synergy most of the time, the bosses resist + reflect + reduce duration of defense down so that’s a dead end and you’re forced to bring overhealers which means even less damage.

Feedback on the blessings.
Crit is nearly useless.
Mana on low health is useless because without overhealers you went straight from 100% to 0.
3% mana on spell casts needed stacking and some mana blessings to work, which means it needs a lot of investment and only pays off at the end.
10% mana is a fair amount, many slow heroes can be brought down to 9 tiles (and fast to 6 tiles) with that bit of help.
Heal on cast was okayish but you really need overheal and it only provides normal heal.
Minions were incredibly sturdy and helped me to avoid using healers until the last 15 levels.
I couldn’t get the defense stack and only once the attack stack (I don’t remember if they appeared once or twice).
The lack of mana boosts surprised me, those would have been really useful

Really wanted to finish my first tower, but the last five levels blocked my overhealers Arco and Gullinbursti. After losing 3 times on level 21 I put my sanity to the side and logged out.

I actually enjoyed the tower. Managed to finish it.

Not having to worry about losing a hero is a big relief. It’s still quite difficult, but at least you don’t have to be afraid to lose one key hero and getting stuck.

This makes it hard, but not lame when you can’t make the right match to save a hero from a curse like in ninja tower.

some reflection on this tower:

i used to compete big in the towers because of the emblems. lately, i haven’t been because life is getting busy, and there’s always that one day that i miss playing tower because i don’t want to make time for it with everything else happening in-game and in real life. i hate so much that tower flags don’t stack so i can maybe spend a leisurely Sunday afternoon completing the Tower.

on the flip side, i understand now that the split between Normal and Impossible actually is a net benefit for players. the first iterations of Ninja Tower and Tower of Magic were a straight climb of 50 floors to get all the rewards. now, you can miss a day of tower and still get all the rewards because all the chests are in the first 25 floors. there’s no pressure to do Impossible because i’m not missing out on any chests, just improved ranking and some additional emblems and coins and battle items. having completed Impossible on several occasions previously, i think the amount of rewards you get from completing each level and the increased ranking for increased emblems make up for the lack of chests, honestly.

I actually completed it after I said that. Once you get the damage reduction blessing and titanium shield on your side, it’s so much easier to play it

Could you please clarify what went wrong with the 250hp under 50% mana blessing? Was it not working at all (not getting the 250hp); or working differently than described? It looked like a useful blessing but if it malfunctions, I would not pick it. Thanks!

I think i picked it too… But i didn’t pay any attention whether it was working or not.

well, the new passives and family bonuses are a pain to fight against.

also, I have Nyx - and ironically, the new immunity to defense makes her special less useful against the bosses of this event

Those upgraded passives boosted the 3/4* too. RT gonna be more painful.

Well since they changed the passives & family bonuses I bet this tower is now pain in the butt to complete too… No defense down means you can’t even use Franz, I think? I didn’t pay attention when I used him the first 5 stages

but missing regular ddown+edd sure made a huge difference already.