Maybe my hero die before it collect mana

That is why we should not rely on just memory

I am forced to use Miracle and Revive scrolls.

I have literally never been able to get a miracle scroll to work. By the time I need it it, it is not my turn and they one shot my two remaining heroes. Game over. I realise I might be a little limited but is there some kind of trick involved?

Put red potion on sturdiest heroes, let the others die and use the scroll…

I was not paying full attention when proceeding into Mirage 5, and took Miki (only at 3.70), together with Gullinbursti +18, Zimkitha +7, Yang Mai (at 4.55), and Boldtusk +18. Somehow managed to pass Mirage 5 fairly easily with any loss of heroes or use of battle items, passing unscathed despite no dispeller in the team! Miki’s attack boost is really useful, although I did forget that his Silence would not work on the enemy mobs.

Don’t know if this discussion is already somewhere, but with this quest you can upgrade the ‘perfect’ red event team like BT - wilbur-falcon-scarlett,…
Any thoughts on that?
I was thinking about scarlett and BT?

This is the most active one I think
https://forum.smallgiantgames.com/t/limit-break-is-here-who-are-you-going-to-use-it-on/244525/18 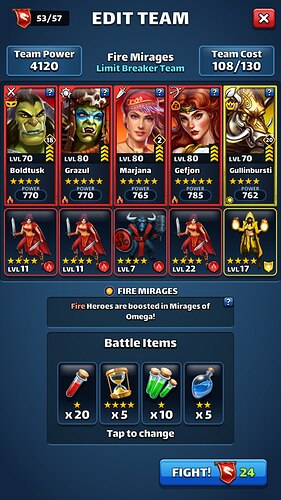 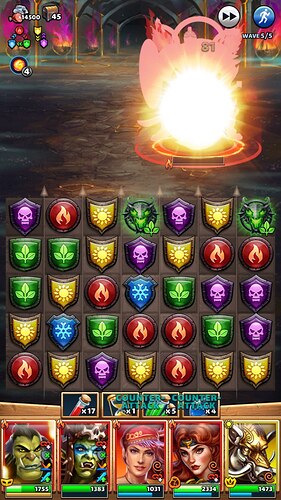 Not yet decide who to limit break, maybe Scarlett or Boldtusk.

I used Raf, Freya, Scarlett, Marjana, and Tyr. First four stages were easy. Forgot about buff steal on the final stage and they took Tyr’s revive.

Well, as you probably read, I never got one to work (I have a pile of them). Thankfully @yelnats_24 clued me up further up the thread. Now, I guess, I have an idea of how to work them.

Well, as you probably read, I never got one to work (I have a pile of them).

I had never used one either and thought to bring it to this. For some reason I had it in my head that it kicked in when all your heroes died. I didn’t know I had to actively use it. In retrospect, duh. Anyways, I died, it said defeat, and I thought that sucked.

Is there any info on how much xp is needed per level for the 3, 4 & 5 star heroes? I just broke Boldtusk and see that 70 to 71 is 7119 xp but cannot find a chart anywhere that shows that for the new levels. There is a graphic that details the food + iron and any ascension mats needed but does not have the xp. Thanks.

It’s in this thread in a drop down box under this heading:

It is also in the OP in the current topic under the Additional leveling cost.
You need to expand it.

Question. Even though MoO(short for Mirages of Omega), is once a month, will we eventually see it being in a 4 week time period like the rest of the events?

Thanks a lot. As they say, if it was a snake it would have bit me!

I did BT and Falcon. My plan is to LB my 4* titan heros (Blues I did Jott) and upgrade my titan scores. Then with what’s left I’ll do my 3* tourney mainstays so I can place high and get more aethers. I don’t think I’ll do any 5* until the second round of the quest and possibly just break my war defense so I can be a stereotype.

Finally got the emblems to put my LB costume kiril up to 18. Interesting stat comparison

The next node will add 22 D onto kiril also

Pure Firepower and only BTs small buff to steal. Noors minions are a nice mest shield rexucing the need for healing and overwriting the 50% attack buff.
Did only use two bombs on final level more for security than necessity.

Last time blue mino worked best too. I think the rule is take a mono team in the color of the quest.

Looking forward next omega quest hopefully it is yellow because I got a yellow 5* aether in lasrt wars loot. Would break my Uraeus or costumed Joon, hard decission.

I think the rule is take a mono team in the color of the quest.

Yeah, I followed this rule too.

Looking forward next omega quest hopefully it is yellow

I assume that it will be the green, but we will see…