Master discussion & information thread for the Fated Summon feature, added to Empires and Puzzles in Version 52. 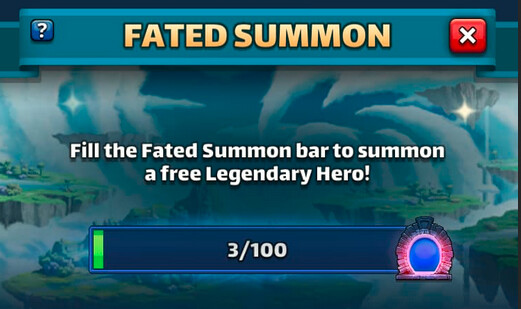 The Fated Summon {FS} is a feature added as a pity counter, which allows you pick a selected Legendary hero from a list presented if you made 100 summons where the result is an Rare or Epic hero instead of a Legendary hero.

The list of heroes is the same for everyone and it is expected to change time to time.

Pretty simple really; the Fated Summon will appear on the top left in the summon screen with a counter about your progress, and it will be always available…

And that’s it! You are now the owner of a level 1-1 copy of the selected hero!

The Fated Summon will stay open after have picked a hero, but you can only select other heroes next time.
If you pick all of the options, then the Fated Summon deactivates until the hero list is refreshed.

You can see the offered hero lists in the next post.

All heroes come without costume.

This information is Based on Beta. I will update this list if needed.

Poll topics of “which hero would you pick” can be found here:

I really want Mitsuko if the list from beta is the same one that goes live. Be a fun foil for Mr. Pengi. Then maybe Grazul or Onatel, if I fill it more than once. I need some reds, and speed healer could be useful, plus that handy-dandy ailment prevention. Onatel just has that downright annoying special…

Tarlak, Rat, Onatel and maybe Skadi. Others are meh

Ratatoskr, Skadi and Tarlak.I have Kong c so Mitsuko is not intereating to me but she is also a nice choice. Ariel is amazing healer also but already have Esme and Aino. I just do not like S1 without costume

Just one week to wait… And this week is already dragging…

The proposed heroes are all obsolete.
For a long term player, they are completely useless.
It could have been a nice feature.
As it is, it sucks.
Let’s hope they will improve it (a lot).

For a long term P2W player, they are completely useless.

Here I fixed it for you. I consider myself a long term player (4 years) but as a F2P the first year and then a VC2P (just VIP and valor passes), I have none of the proposed heroes apart from the season 1 ones. So many of them are still very interesting to fill my roster.

I haven’t been p2w for years.
It will take many months to reach 100, I hope in the meantime they put heroes not from 4 years ago.
However, in theory, this is a feature especially for those who make a lot of calls.
But whoever makes a lot of calls doesn’t need these heroes.
And the S1 heroes are truly ridiculous.
From my point of view, the usual Zynga mockery.

I disagree, it’s still useful for those not making so many pulls. The most important point is that you can CHOOSE the one that you want, it’s not random. Even as F2P, one should be able to make 200 pulls in a year for two fated summons. So who cares about the season 1 heroes? I have 15 heroes to choose from that I don’t have first before even considering the season 1 heroes. But I will certainly not be able to get them all before the list is refreshed anyway. For P2W/whales, it’s still possible that they are missing a couple of them, otherwise, it’s still more free souls for the souls exchange.

I also don’t get how one can complain for something new we all get FOR FREE. That’s beyond my comprehension. It’s free and yet you are spending time to complain about it. And remember, time is money…

After sage advice from @Muchacho @Noble_Weasel and co in my question thread, I think I will target Freya and Onatel, although I am not sure in what order…

Probably Freya first, but that makes me wonder whether I can summon another 100 in time before the list refreshes…Will I regret not choosing Onatel first? Lol

I didn’t mention any heroes in my previous post but yes, many people are advocating for Onatel

She is still great today since she is really good at mana control.

Onatel was really useful in the yellow elemental event that we just had.

I also don’t get how one can complain for something new we all get FOR FREE. That’s beyond my comprehension. It’s free and yet you are spending time to complain about it. And remember, time is money…

Free doesn’t mean good.
Would you be happy to get a free Dawa?
If there were only S1 heroes for free, how would you rate this feature?

Speaking as F2P now, I’d rate it “better than what we have now.”

Fated summons exist to circumvent gambling laws, because now they can say with full confidence that someone spending $100 for 100 pulls is guaranteed to get at least 1 5* hero. With that, they claim 5* heroes are worth $100 to the playerbase and therefore summoning is not gambling but buying 5* heroes in installments, with a chance of getting even more than 1 hero.

That said, I’ve been playing this game for more than 4 years and have none of the non-S1 heroes featured and they’re almost all highly desirable for me. The ones I care about the least about are Seshat, Tyr, Ratatoskr and Thor, and Thor is the only one I would be actually disappointed if I randomly summoned him.

I think I will go with Skadi. Anti-minion is so important, and I don’t have many characters effective in that regard. Would love Tarlak, the Squirrel, and Onatel, though.

Slightly off-topic, but I will have to point out that Skadi isn’t an anti-minion hero, as many who use her are finding out. She benefits from dealing with weak minions because of the subsequent stacks, but up against W3K teams I think most don’t find her as effective as against other summoners.

Many of these heroes are still desirable in my opinion. Hopefully when there are new heroes added you can still pick from this list… probably go Telly or Tarlack first then Kageburo second (then the other green next) as they are the colors I have the fewest nonS1 heroes (lucky to have Sheshat and Freya already in that department).

I have heard rumours, most are not correct except one need to be clarified.

If gems summon counted to the fated summon?