You can only bring yellow heros

Non-super elemental heroes can only be used twice. Are costume counted separately? So if the hero has costume it can be used 4 times (2 with costume and 2 without costume)?

I can confirm that taking a team of 3* heroes all at 1.1 (I.e. totally unlevelled) for the first stage does NOT work

This event is poorly designed. If you don’t have a deep roster, you can’t get far. The developers love to focus on helping the strong get stronger, rather than creating events that are beneficial to all. Retaining new players is important for the future of the game. Otherwise there will be a bunch of strong, p2p players and, when they decide to quit the game, E&P is over.

Fortunately the summoning odds are disastrous

they‘ll be disappointed by this stupid event as well).

The developers love to focus on helping the strong get stronger

Reward for completing the whole event is 2 pulls.

You can get 1 pull while ignoring the 4 last levels.

For the strongest players 2 pulls is nothing. They buy 100x times more for every portal like it’s nothing.

Completing this event does not make you anyhow stronger. It’s there just for fun/satisfaction from completing. Unless you are the one in 500 players who gets to pull the featured elemental hero for free.

And well, the harder the event the more satisfying completion is. In theory, at least. Though I have to admit, I enjoy this one more than others. At least there’s some challenge in it, and it’s not coming from having to sacrifice 10 mins of my life matching tiles on level I can’t lose, like the last levels of towers.

Gosh, if only there had been, I don’t know, a discussion about how this event would be terrible for “newer” players — one that had been heeded by anyone at SG, anyway — with even some people pointing out that this stretches the definition of “newer” players to actually mean most players including many long-term players….

I also can’t help but feel like this is just one more excuse to “new portal lol for truly random pulls lol for 400 GEMS NOW IT’S SG-FLATION SUCKERS!!!”

I also also can’t help but think that anyone with the roster depth and roster height (i.e. having five heroes of the same color who can pass a 5400 TP suggestion in an event with weird rules) to pass all the stages of this event really, really doesn’t particularly need to draw more yellow heroes.

—I suppose in theory, such a player might save the coins toward another, weaker color, but if one’s roster is hugely deep in yellow, it seems unlikely to be particularly paltry in other colors

this quest is a joke. how zynga imagine that we have 25 strong yellow heroes ? or maybe this is only made to spend more and more money. i’ll skip this insane quest, it’s an offence to most of the players. brainless developers!

2 summons, with a real chance to get a Bane! 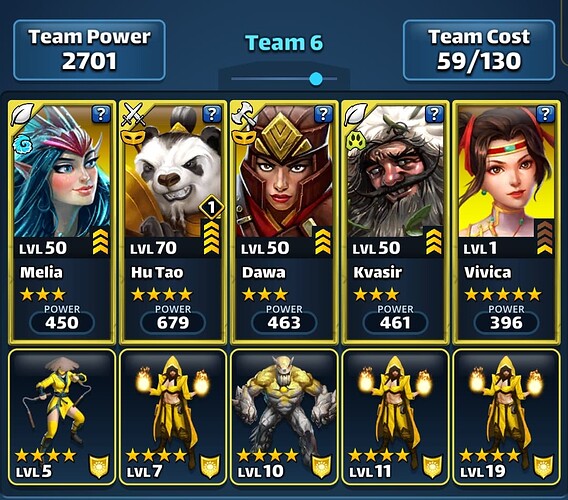 Used mana pots and couple of tornado. Lost c-Dawa by slash of critical Melia on 2nd stage
Working on rekhetre for level 3 and 4.
Looks like, I have just enough heroes for completion.

This event Is “how to lose costumers” tutorial.

good luck! you’ll be rewarded with another Dawa!

I am pretty sure this was already discussed, but I can’t find the answer:

Does each costume of a hero count as a separate hero for this event?

Costume doesn’t count. I have already used costume Dawa. Can’t use her again, without costume.

great! thanks ! Abhi! this is even harder

First 2 stages done with this team:

I used some potions and a time stop when things for ugly. 1300 team power below recommended on stage 4 so this event might be doable even without having a great roster.

Thx, I have added it to the OP.

First two stages is completed with:

Items:
Axe attack, bomb attack, minor healing and mana poiton (but not much of them were needed)

Another whale event. I screwed up and lost 1 match. Don’t think I could complete this

As i allread said on another thread, i am pretty limited with my yellows but i am actually glad that i even got to stage 5:)

Hey SG? Why can’t we just have some fun? Remember fun?

We got real life to remind us, every day, that we can’t catch up and that we’re ‘lesser than others’. We don’t need games for that.

Why not just have yellow heroes work differently, like, their power shards get the effect from the Sand Empire event, or something else. Why must you put limits on everything?