Did exactly the same after my 5 Quenells (See above)…
Another 10 Pull and it really happend:
I got a 6th Event Hero! 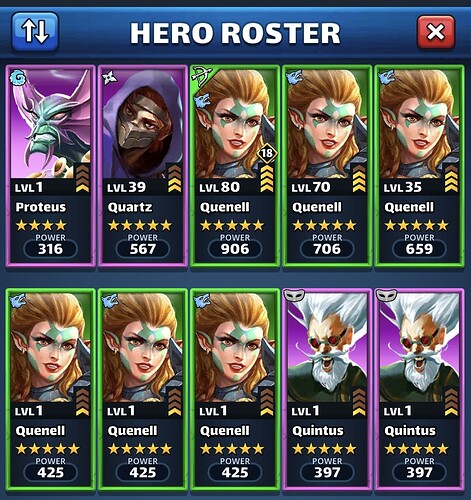 This Quest is totally broken. An easy pass for me. SG please adjust the difficulty level. Enemies are insanely overpowered plus the burn damage is just not playable. And the rewards aren‘t worth to blow masses of materials.

Yes, earlier it was very easy now it is extremely hard.

Finished the events without struggle but not going to burn any flask and items for better scores.

Used my typical red and blue mono team. Consumed so many antidotes lol.

4 scale, are S1 5* heroes and their costumes good enough?

The event is hard. But Its supposed to be.

I like the challenge of working out which heroes I need and which items to take. If I don’t have the heroes to do it then I level up some for the next event. Its me vs the game.

I’d rather have a new more difficult event added to the game than roll through another easy event with the same team that is used for every other event.

I’m not a whale I’m not spending loads of money to get to the top of a leaderboard. I try to complete an event and collect the rewards and move on.

The thing with this game is you cannot win it. There is always another hero to get challenge to complete, titan to kill or war to win. If every event could be completed 1st time then the game would be very boring very quickly. It needs difficulty increases and new mechanics to keep it interesting.

My only problem with the event is the terrible terrible loot.

Give me one, I could trade my 2nd Lewena…

This is a quest I just don’t feel like dumping materials into for the rewards . I’m not a huge ninja tower participant either .

I don’t quite understand this arguement. What’s then worth hoarding the battle items for? What’s more important in the game to use them on? Not asking mana, as this one is naturally needed for titans, but else?

I get that you probably earn less here than the items are ‘worth’ (I personally see it as trading my iron for emblems etc.). But then, that’s the case everywhere in this game.

Unless you are still in position where you struggle to beat rare quests, seasonal ladders or class quests, then ok… but even so, these are rare enough it’s not like you need 100 bombs to finish them.

I just beat epic using the same concepts of mana control basically. Beat every stage on the first try and no replays. Stage 9 was hardest as I will explain below: 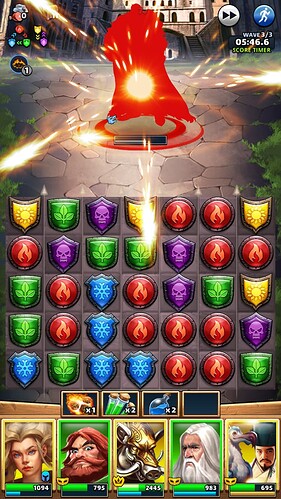 Unlike the 3* team, these guys are upgraded:

I started with Buddy +20 and LB’d in place of Melendor thinking of a minion shield like Kvasir was with the 3’s. Damage is too high though I needed a second healer. That is pretty rare for me which shows how increased the difficulty is. Between Gullinbursti’s overheal, Melendor’s D boost and HoT, It was solid.

Melendor did dispel for the riposte enemies, but that was secondary to me. Yes, I stacked colors. When hitting them with neutral and weak colors it isn’t too severe. Even my specials if I fired while riposte was active aren’t high damage specials. If know it gave some people fits, but wasn’t too bad for me.

In all 10 stages I had an enemy fire twice. Once was in a early stage where it was already decided. The second was an ill timed cascade and the enemy shot a special early that made all of my special effects moot for 6 turns and was uncleansable. That was stage 9 and ended up being the hardest due to that. All 3 bosses were alive, so I had no where to ghost tiles. I didn’t want to hit them to get more enemy specials rolling, and couldn’t stop their specials due to the enemy special in play. I can see how if the bosses start firing like nuts you’re dealing with too much.

Items were minor antidotes, minor mana, medium mana, and bomb attacks. Rarely used everything in a stage. Stages 9 and 10 were the closest I came.

I am reluctant to do legendary. I want to beat it to say I did, but am running low on clothes to keep making minor antidotes. I have a team that comprises of 3 cleansers. If they aren’t effective though in reducing my antidote use rate for this I will stop due to resources. I don’t play a ton anymore and don’t have mountains of materials stock piled.

While upgraded heavily the heroes aren’t too hard to get. 3 S1’s with costumes, an S3, and a event hero also available in HA. Next time around Hansel will be ready. I got him in Festival portal.

Anyway, I hope this helps people still trying to grind this out. It can be done. At some point maybe I need to make a team that’s not a grinder. Some people are beating end stages in like a minute … maybe I’m doing something wrong? It’s what I figured with the heroes I had

Good luck out there!

Last 3 levels of legendary were pretty straight forward to complete. Took in axes to finish off annoying not quite dead knights

Mana for proteus
Health for everyone
Antidotes for fire traps.

Get through 1st 2 waves. Then mana control with proteus.

Not going to have a high score. But i finished it.

Hello.
My first legendary heroes from this call in single strokes

I bought 3 offers from which you can make 3 draws and Ludwik came in the first draw and Lewen in the fifth draw.
I still have coins for 4 draws, I will try it tomorrow

Ooh u lucky so and so…

I’ve given up on this event. It’s truly one of the worst if not the worst I’ve encountered in this game. I can’t beat Rare 10 and I’m done burning through items and WE in my attempts. It’s not like I’m going to get anything worthwhile in the chest anyway. It doesn’t look like my alliance will unlock legendary so I can’t even scrape together enough coins for a chance at summoning another Dawa.

Is it just me, or are people seeing a drastically lower amount of event 5 stars being summoned this time around? I myself did 20 pulls and didnt get any 5 stars. Now thats not much data, sure, but I’ve watched over 600 pulls being done on youtube and I’ve literally only seen 2 people getting a new event 5 star and they were both rayne. Statistically speaking this is highly unlikely.

Anybody else seeing this? Thoughts?

You’re right, that really isn’t sufficient data to go off of.

I’ve never pulled so much as this time (I’m over 100 pulls now) and I only got first season legendary heroes. And that’s weird as I’m used to get at least one event hero in about 30 pulls.
Don’t know it this is done on purpose, but, aye, it’s weird.

I pretty much got the same from items from the Epic level chest. A scabbard? Are you kidding me! I had to try level 10 like four times to beat it. And then I get this reward. All the other events will at least guarantee a 3* non-farmable. I will probably skip the legendary as the rewards are just not worth it. My alliance probably won’t unlock legendary anyway since quite a few are getting similar results and the others are quitting since they don’t want to bother just to get bad loot.

Please increase the rewards next time.

My alliance is ranked 1374 with 34.7M. As much as I’d love to get to top 10K we’re pretty casual. It’s shocking to see some folks (with much better rosters than me) with rainbow teams that include falcon, almur, and Jott all in one team.

Funnily enough, the legendary tier was like easiest for me, because of Vanda and her special. I don’t have the patience or firepower to fight for 1000 place, 10k is enough - I hope I will stay there (currently around 6k). Still, this may be the toughest event I’ve ever seen in E&P. The worst of all - besides the difficulty - is the lack of suspicious chests or any other ways to earn coins. I would gladly burn more resources if there was some chance to earn additional pulls. As it is - it’s a no. I bought one 3 pull offer, which netted me 3 S1 4* heroes. No, thank you.

EDIT: Also, the reward tiers are very narrow. 1? 2-10? 11-100? 101-1000? 1001-10000? That’s sick competition. I don’t have anything against it, as long there’s some middle ground - one more bucket, like 10k-50k, would be good I think, with proper loot awarded for those middle buckets. As it is now, I feel “cheated” in a way. I burned a reasonable amount of resources and time, as a long-time player, and I think the rewards for it are far from satisfying. Of course, it was only my decision to use those resources and time, and I don’t blame anyone for that - but now, once the dust settled, I think I invested too much. Won’t another time.