So apparently I was warned for saying ‘hi’ to someone. That’s how broke the chat reporting is. Which may not be a big deal to some but basically it’s the death of a major recruiting tool for an alliance. 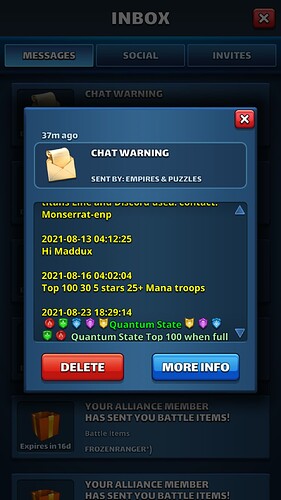 This is completely ridiculous and needs to be fixed.
Obviously, some people are abusing the feature. I can only imagine the number of bogus complaints that SG has to shift through so I sympathize, but given the importance of recruiting, I hope something is finally done.

Totally agree on this. Chat warnings should never ever be given to people recruiting in AR.

chat needs a lot of adjustments as well

but that report is ridiculous, imagine people blocking others in order to recruit that freelance player at lvl 70+

“hello XX”
not on my watch competition REPORT

Yeah that’s exactly what it is, just report your competition. I understand blocking people, when I’m in recruiting mode I block so I see less ads but I never report someone. Poor sportsmanship.

you were going after some valuable assets, you basically asked for it

i remember once being scolded by someone for posting a recruitment ad in peer support by accident, even though i apologized after a couple seconds for the mistake, the went and reported me
though i didnt get a warning message after, which is weird now that you mention it…

This should really be fixed. It is already hard enough to find a suitable alliance as it is. Now you basically need to go to external sources but if you are an early stage player, you don’t know about them. I found my first alliance from AR and I probably wouldn’t be playing anymore if I had not.

it is hard to tell when this happens and the numbers of reports needed to reach that. i am interested to see the warning logs since it has different dates and times

1- pointless side chat in AR rooms.
2- recruitment Ads in chats that are not AR.

i rarely open global chat now but at the time when i did to recruit, AR was very frustrating and filled with irrelevant side chat and it was always the same names

while most of that it isn’t worth reporting for me, i see how it be frustrating for others to be honest

I had the same situation before and i wrote to SG with screen shot and thier reply was:
“Don’t care about it it’s just a warning “
The thing is there is some players with 20x accounts level below level10 and only 1 of them can ban us

.
I suggest they can let players with level 30+ Who can do the report , in that case we get rid of the losers.
Thumbsup

Hi again,
As I mentioned in earlier post that we need SG to prtect us from low lecel players who creat alot of accounts and start to report us for doing nothing , now it becomes widely and started to be unbehavior swearing us in chats .
I would suggest to give some trusted people to monitor the chats and ban those losers and i have reported many times but as i said these players has like more than 20 accounts and they use it only to swear others and reporting us, i have some screen shots if you want me to post them

Hi, most forum members know and will actively warn newer players away from global chat and global chat recruiting. It is a total cess pit imo.

By the way, what are you getting reported for? You don’t want randoms joining your alliance. The other thing is that it would be near impossible to monitor global chat in real time. The only real way SG can control it is to implement a country wide ban

Recruit here please, you will find quality people. (other people use Discord groups but I have no idea how that works.)

I wish you all the best.

Please no screen shots of players as name and shame is against fourm rules…
Maybe send them to sgg to have a look at?

@sft1965 post was flagged by system for watched words nothing bad

@sft1965 post was flagged by system for watched words nothing bad

I was initially confused but on re-reading saw the offending word. Sorry to have wasted your time and thanks.

nah the system wastes my time on certain words