Note: I formulated this guide with a mix of information from beta, release notes, and observations from the first live Raid Tournament.

Now that the first of the Weekly Raid Tournaments has been released, I will be finalizing these notes to update anything that has changed, and create a separate thread in #player-guides for future reference after this first Tournament ends.

Here’s the overall process for the Tournament:

Other than restrictions on heroes/troops and Special Rules, the Raids themselves in Weekly Raid Tournaments work the same way as regular Raids.

Each day, you’ll be able to attack up to 5 teams.

The flags used for Raid Tournaments are separate from regular Raid flags.

One notable difference to Regular Raids — you can’t reroll.

The matches you get are whatever they are. But that’s different than Regular Raids, because everyone is playing under the same restrictions — if the week’s Tournament only allows 3* heroes, it’s not like you’re taking your 3* team up against someone’s 4* team. Players with deeper benches meeting the requirements will obviously benefit, but just having a pile of maxed 5* or the best HOTM won’t do anything for you in a tournament that doesn’t allow 5* heroes.

For the whole of the Tournament, you have 4 “Lives.” Each time you lose a Raid, you lose one life.

The lives do not reset across days of the Tournament.

Once you’d lost 4 times at any point during the Tournament, you are out.

If you choose, you can pay some gems to reset your lives after 4 losses — but your score and ranking would still be lowered because of the losses. Paying to reset your lives does NOT give you an advantage from the Raids you’ve already fought. It simply allows you to continue using your normal 5 flags per day and not be “out” of the Tournament.

There is no way to buy additional flags. So everyone ultimately had the same number of maximum flags to use for attacks during the Tournament. The only thing gems allow you to do is continue playing if you’ve used up all of your lives.

Done for the tournament after 4 total losses. 4/20. You can reset the counter with gems and continue in the tournament, but there isn’t much point to it because if you’ve lost 4 matches, your score has already taken a big hit. Assuming you don’t pay gems to continue, your score stays where it is except for the defense performance component. At the end of the tournament, you still get prizes based on that score, so probably the bottom tier participation loot

CAVEAT: How this worked in beta changed SEVERAL times during testing. It’s very possible we’ll see how all of this works evolve over time, much like Alliance Wars have changed many times since initial release.

Raid Tournaments are scored based on four factors:

To add some of my own thoughts to that:

The Difficulty Bonus seemed to me to be a little esoteric in beta.

I imagine many people will be interested in trying to deduce more insight into this element.

What is Defense team grade in Raid Tournament? 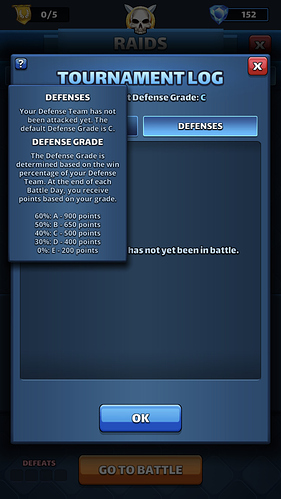 I found this was actually very clear and useful — and I think provides some insights into regular Raid Defense Teams too.

The grades are assigned based on a percentage of wins by your Defense Team:

The Defense Grade is determined based on the win percentage of your Defense Team. At the end of each Battle Day, you receive points based on your grade.

My Personal Take on This:

The top grade in this approach was awarded to a Defense Team that won 60% of the time. To me, that’s a good confirmation of what many of us have long accepted: Raids are unfair, but not for the reasons you think - Raids MASTER — that is, they heavily favor the attacker, and even a top-notch Defense Team will lose much of the time.

Each week has ONE Special Rule in effect. (At least in beta; it’s possible live Tournaments may sometimes have multiple Special Rules at once.)

The possible Special Rules are:

The Special Rule affects both Defense and Offense teams.

Acronyms in this table:

Here’s the current breakdown for ascension mats, tokens, and Emblems (for simplicity, I didn’t include the Flasks, Atlantis Coins, Battle Items, and Crafting Materials that are in loot in addition to these):

(I am not a moderator)

Is it good hype? Are you looking forward to Raid Tournaments?

I am curious, does the very fast special skills, bloody battles, and (I forget the third one) healers need not apply maybe - apply all the time or are they a part of the rules that apply to a specific tournament?

They apply to a specific Tournament, one at a time — at least that’s how it was in Beta. So it’s only one Special Rule per week.

But the potential for something we could call a “Bloody Very Fast Buffer” (using Bloody as a superlative, like the British) is reason enough to hope some day there will be a special Tournmament with all at once.

Really, hate to say this but I don’t need a very fast bloody buff. That is my daily regime. You need to dig deeper. Lol

@zephyr1 I am so appreciative of the time and effort you have put into getting these threads started! (and will continue to do so once they get rolling)

Myself and most of my alliance mates are really looking forward to trying these, I only got into beta in time to try a couple times before the launch of v20.

I hope people will be patient, as I am sure there will be lots of feedback, and issues that may need to be tweaked or added, or bugs/glitches………but the start of something fun I believe, let the games begin!

Really, hate to say this but I don’t need a very fast bloody buff. That is my daily regime. You need to dig deeper. Lol

How about a Very Fast Bloody Buffy?

…this thing better start soon, I’m getting antsy over here.

These were a ton of fun in beta, even when I was getting my butt beaten. It makes me think differently about fights and ability synergies, and that is always welcome. So I’m really looking forward to seeing how they play with the full population.

Then meet me at the sign up table. I will be just ahead of ya.

Any info about exact date?

The beta schedule was particularly unhelpful for insight, because all of the timelines were compressed to increase the number of testing cycles.

But we do know that they’ll be forcing a Maintenance Break soon enough that it will disrupt the Wednesday War. So my guess is we’ll see a forced upgrade for anyone still on Version 19 soon — maybe even 2 hours and change from now when it’s 9am in Helsinki.

Since there’s a 24 hour registration/preparation period for Raid Tournaments before they start, I imagine there won’t need to be a huge pause before that goes live. It might be at the same time or shortly after the Maintenance Break. I’m hopeful the Tournament will start in the next couple of days, and would be very surprised if it’s not by this weekend at latest.

Thank you Zephyr1. I was thinking it must be today or tommorow so people can raid over the weekend, hope im right. Wake me up when its ready please

What were the defense points on days where you weren’t attacked, or does the game make sure everyone gets attacked? (N.B. there’s e^-5 chance, bit under 1%, of no attack if matches are random, and the pool of attackers is the same size as the pool of eligible defenders and all attackers use all 5 flags.)

I’m really excited for this feature.
It’s amazing what a little change like all Skills are very fast does to the balance. It allows you to use diffrent heroes. It also has huge value for the developers. They can see a “what if” version of the game.
The potential is endless. If it is successful they can add lots of new modifications.

I’m really looking forward to it too!

I found myself pretty stagnant when doing raids - using only one team and rerolling a lot. So to start some preparation I decided to not reroll and choose a right attacking team everytime. It takes more time, but I feel a little practice will be handy, especially with the rewards being good and achievable (it might change tho).

Some notes I made to myself seeing the rules:

hi, but is it true that to participate in new raids you have to pay with gems?