So I think this happened twice today in RaidT…but it certainly happened at least once. The first time I wasn’t looking for it, but was pretty sure it happened, so I was looking for it the second time.

Situation…mana almost full for kunch…lots of hurt heroes. Dump a line of purple tiles (enough to fill Kunch for sure…remember this is very fast and he has mana troops). No mana generation at all. No delay aliment, I checked before using the purple tiles. In case it matters all three tiles went into Liana. Attached is a picture right after (Ursula went off and took out three heroes). Bug? 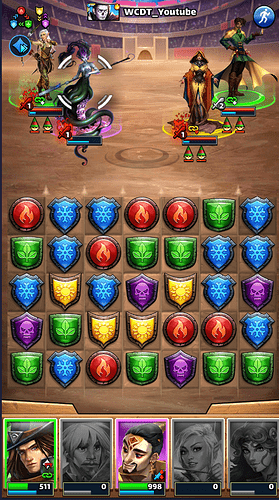 Can’t determine if it’s a bug without video of it happening.

In other words, there is no explanation given the board layout. So a bug.

Is it possible onatel’s special was on the last turn against kunchen, which takes away 100% of mana gained from affected heroes?

EDIT: This is why video is so important. We can come up with what its all day about why this occurred.

No, I check. Unless that is the bug (a visual display bug) but I don’t think it is that because her mana would be higher.

It’s hard to predict when a possible bug will happen. Almost nobody would think before entering a battle “oh I’m going to record this battle because a bug is coming”

Anyways. This is my hypotesis on what happened:

1- Onatel had her special active on Kunchen
2- You matched the purple tiles on the last turn of Onatel special, so she stole 100% mana from what Kunchen would have generated.
3- That mana stolen was enough to charge Onatel. So she fired her special on Hansel.
4- After that, your opponents made their slashing attacks and your opponents gained the amount of mana they obtain when their turn end.

The little amount of mana we see in the screenshot and the fact that Hansel has Onatel special applied but not Kunchen is the result of all those events.

That is possible. Means I would have missed her going off, but I’ll grant that is possible, if unlikely. Which would take us back to a visual bug, and that isn’t the first, or even second time we have run into those.

What would you say the visual bug is?

I mean, if the events actually happened as I described, I can’t point out any visual bug.

The fact that the never ailment showed on Kunch, if that is indeed what happened. Like I said, I was keeping a sharp eye out for oddities due to the previous experience.

ok, in that case if you are sure the ailment was not visual on Kunchen but then it was on Hansel as the screenshot shows, then yes, it’s a visual bug.