Here is a pic of Kiril at 4.70 +20. These stats make him a legit 5*. Granted, this is his limit and most 5* start with stats like this and can go up with emblems. With a L17 mana troop he will only need 9 tiles to fire the special.
As close contenders I also have Melendor and Grimm. Melendor and Kiril are special since Mel was my first 4* and Kiril was second. Initially I was mad since I wanted 5* heroes and I didn’t think healers were any good. MORE POWER!!! But they proved indespensible as a team especially when my 3rd 4*, Triton came in from the first Atlantis.
I read that Melendor is more of an attacker who happens to heal while Rigard and Sabina are healers that do a standard attack. Mel hits very hard and with a decent troop he goes over 900 attack at just L10 troop.

Who are your best creations? We know 5* get better so don’t post them. And sure the 3* are OK but in reality the 4* backbone for most of us are where the emblems really help. I searched for a thread like this so feel free to merge it if there is a simialr thread. Just wanted to see the limits of the “must have” 4* like Kiril, Rigard, Mel, BT and those superheros from S2 like Wilbur, Proteus, Triton, Gaderius. Let’s see who you have maxed and why you went that path (atk/def vs def/hp). 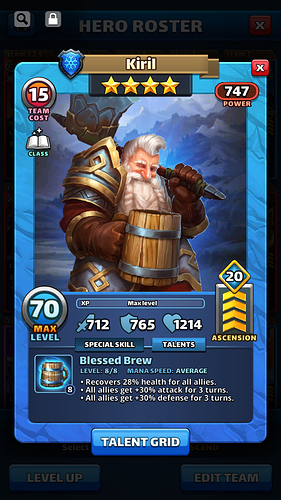 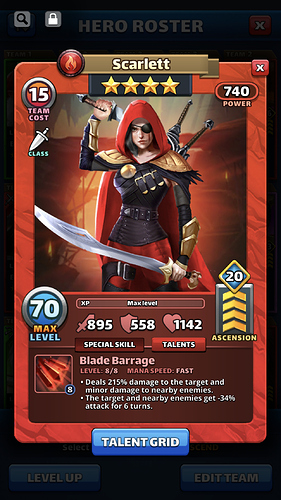 I know the HP and DEF are kind of low for a 5*, but that ATK stat though…

I’ve run into a +20 Boldtusk that mopped the floor with my team. I’ve also seen a +20 G. Jackal with insane attack in this thread before too. Back to the emblem grind…

Wow, she is an attack beast. I took the emblems from her and put them on Domitia but I only had her at about L10 I guess, maybe a little more. Since she already had a huge attack I tried to get her to survive better. I went for def/hp. Even with a lot of help she barely got over 600 so this might be the better way to go. Let her burn bright even it is is short.
I have a Grimm at +18 and I tried to make him better in def and again he barely gets over 600. Another hard hitter though. Maybe I should rethink him. WIth most of them though I likely will reset and pass the emblems to a 5*. I did it with Triton when I got Lianna and took from Scarlett to give to Domitia. I have Isarnia and hope to get Sartana so the wizard emblems are tough. Kiril like mine is useful so I will likely keep him that way and since Isarnia is only at 2.2x I will probably get more emblems to use on her without taking from Kiril. But I have a problem right now since I do also have Proteus. He is maxed and could use some defense as well.

I think the heroes with one purpose like healing or mana stop need to be alive to work. They aren’t good for attack with skill or tiles so they need to be alive. Kiril, BT, the 3 4* healers etc. need to stay alive to be useful. Melendor is a bit tricky with the huge attack though I have him at +19 and went with all def/hp except in the first section where I went with atk/hp. I think it would change his stats by increasing def by 18 but cutting hp by 36. He would go under 1200 for hp and def would go u but not really enough to reset things and do over. If anything I might give them to another. But this is for the 4* heroes, not what we are going to do later!!! 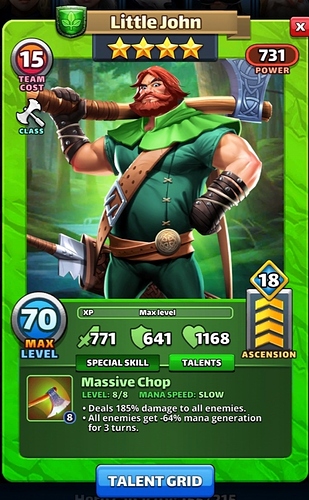 I’ve also seen a +20 G. Jackal with insane attack in this thread before too. Back to the emblem grind…

You mentioned seeing G. Jackal in this thread before. This is a new thread and I tried to find one that discussed this. Showing 4* that are now 5* but I didn’t find anything that fit. There were the question types of who should get the emblems and similar but nothing showing them off or who you chose to max to get a “free” 5*.

Correction - not this thread, but another thread in the forum.

I have him in my alt account. He is like many of the 4* though. You can use the emblems and get them better but they seem off a bit. Like Kiril looks balanced as if he was designed that was and could have come out like that. LJ is great and I am doing the same thing but like my Melendor and Grimm, they usually lack one stat but excel in another. So you can either push that stat like attack in Grimm’s case or push his def up and try to make him less squishy. Arguments have been made for both but to me if they aren’t alive they can’t use the skill. Yes the tiles work but only if you have heroes alive. Very nice one here. Do you plan on taking him up to 20? Do you think you will reset him to give the emblems to another hero if you have a 5*?

That is another thing I have thought about. You can make some 4* into a bargain 5* but then if you have a 5* you have to take them at base level against other emblemed 5*. Decisions, decisions…LOL

Probably not to 20, since I have more maxed barbarians waiting for talents. Reset for a legend? Nope. I already have Azlar @+2. My def doesn’t need barbarian emblems and that would be the only reason for a reset.

When embleming we need to pay attention to:

The role of the hero.

The stat the hero excels at: Due to % buff and bonus stat system they will benefit more from boosting their best atribute comparing Gormek vs Grimm initial values and how they grow can be useful.

The hero doesn’t have to be alive for their attack strength to contribute to tile damage.

…but should be to fire its special… 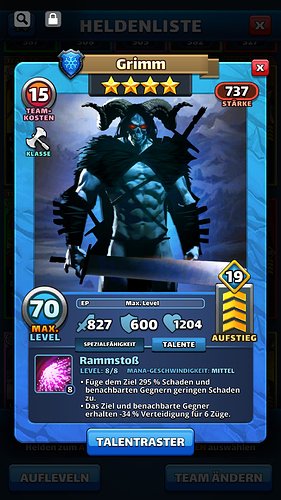 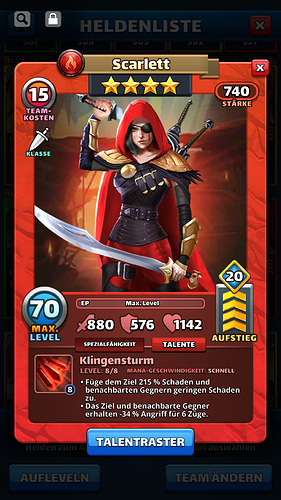 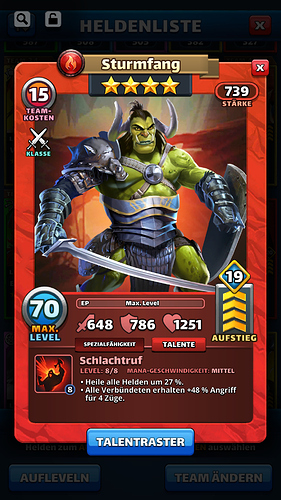 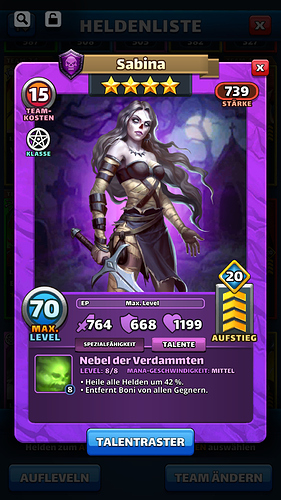 These are mine. They do not look that balanced like that formidable Kiril. It was nearly always an one-way-road.

Kiril was very balanced but not by my choices, I think it is just more the way he originally was plus the final grid spot is a big attack space. I went with def/hp for most but I did try the occasional atk spot to give him a little boost but only realized at the end that he was so well balanced. Maybe I could have a job at SG. Not likely but maybe they could let me into the beta program (hint, hint!).
Here are 2 more I have and I will push to 20. I was told Melendor needs a L11 troop to drop 1 tile from him and I already have a L11 mana troop for that. With Grimm I have other barbarians in the 4 and 5* range. I think he will keep the emblems though and the next one will just get new ones. The only resets I did were from Scarlett to give to Domitia and from Triton to give to Lianna. I might have kept the emblems on them but they were only about half way I think as I only got Lianna and Domitia to +7 with the emblems from the reset. But Kiril and Melendor are useful all the way up so they get to keep them. In classes with a ton of heroes I will likely emblem more than one, like Grimm. Same with the ranger class. Lianna, Triton, Tiburtus, etc. Yet other classes are scare like Sorceror though I got lucky with Mitsuko.
Here another 2 near completion. I hope to see more and maybe some from events or some outside the box ones like Amoenna or Gobbler(his def is pitiful, as low as a 3*). But not just for fun, someone who has found a use for them. 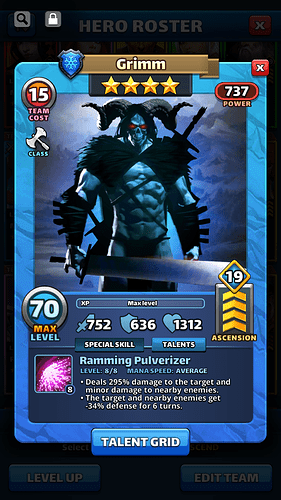 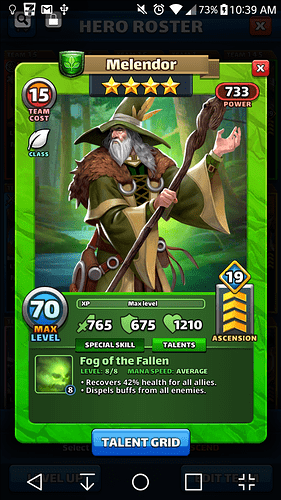 My 5 star level Sabina and Grimm, with Leonidas and Magni for comparison… 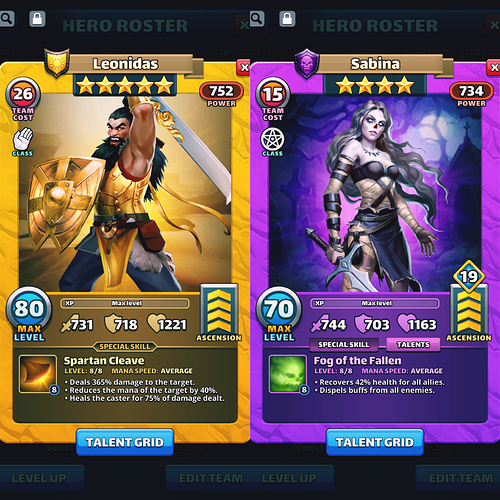 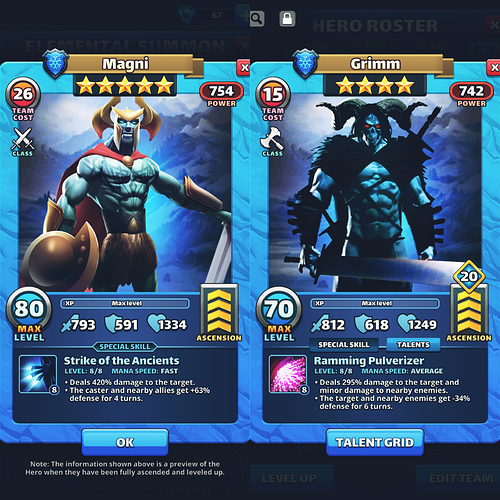 How many emblems does it take to max a 4* hero?

The guide linked above in the top post has the totals, which are: 3

That’s to totally max a hero. See the spreadsheet for the incremental steps.

That Grimm, magni comparison is great. I have Grimm as I posted above and magni but he has +7 emblems. I want to see mine vs a standard one. Why Leo vs Sabina though?

My 2 Protos are both only +9, but have better stats imo. 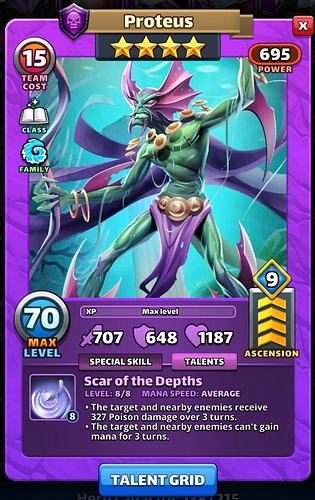 Att definitely is the wrong path for him…