My problem is the majority problem here

How to build a defensive team.
I know that there are a lot of topics devoted to it, generally speaking what to stick to. However each player has different resources of heroes. So the recipe for building a defensive team should be closely matched to your team. 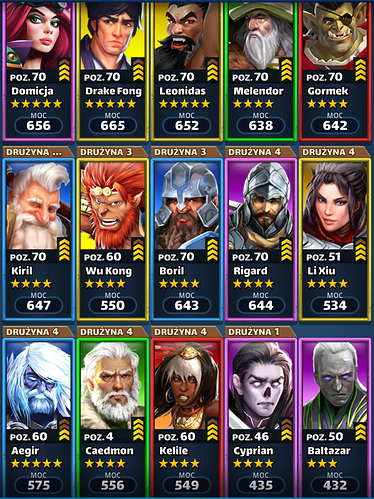 Any advice on which Heroes i should use in my defence team?
And in what order?

And what do you think about the Aegir standing in the center with Kiril and Boril on flanks (when he will be stronger )?

Thank you very much for all the advice

You definitely don’t want two yellow together - most attackers will take extra purple, so your front line is very vulnerable.

Or Domitia for Rigard if you don’t want two healers

Also the reason why Drake is better in a support position is because the blinding of enemies causes a high number of missed targets, which sounds generally good, but in the beginning of the game it causes a high mana generation for your opponent (missed ghosted armies generate twice as much mana). When it comes to a late stage, blinding takes priority as your defending lines are likely to be much less populated, so ghosting would happen often anyway.

If you want to keep the heroes in your current defense the team i would change the order to:

The AI that controls the defense team makes special skills go off from left to right. So if multiple heroes skills are ready in the same turn the hero furthest left will be first, if Kiril is in the left rear position then all your heroes will get the benefit of the attack buff that turn.

Thanks Decorum! This is the first time in the 3 months I’ve been reading the Forum that an explanation of this strategy makes sense. The lightbulb went on! Now if only I had the heros to utilize it.

I’m having the same problem aswell. I tried to follow the defence instructions given by some of the member here, but my team is still getting pounded on a daily basis. At this point I’m struggeling to get myself above 1800 trophies.

Pretty much every raid attack is won by me. I choose my opponents carefully. But my throphy’s are downed by 200 every day.

I haven’t been leveling many of these because I’m waiting on acquiring the 5* heroes I want. I’m currently sitting on 60 TC20 summons and 589 TC 11 summons. In the meantime I’d like to use my current heroes as good as possible in raids. But I haven’t found a sufficient defence team. Can anyone help me make a good selection and order?

With you actual heroes I would field this defense:

Thanks for your reply. I ran this defence apart from a Joon in the place of Hansel. I figured I needed more healing power so I put in Boldtusk for G. Falcon. Both formations didn’t do well…

Then try to level Wu Kong and Sabina to try this:

I’m not sure there’s a combination of those heroes that will do brilliantly as a defense in Platinum.

You have too little actual direct damage and direct control, and too many passive effects that can be unrolled with a dispeller.

@FraVit93’s initial suggestion has the disadvantage of being easy to unroll with a dispeller, since much of its transformation in board state is passive.

I would try this:

It won’t be great. The heroes are misplaced from a maximum benefit perspective. That said, my thinking is:

The core of Caed-BT-Hansel is reasonably scary. If you attack with blue and get insufficient tiles, you’ll be damaged and mana controlled pretty fast. BT is an adequate tank, but not great. But he will reverse some damage if he fires, and few people think to bring a dispeller against just an attack buff.

Tibs in the corner isn’t great. Most fights, he’ll never fire. But late in a fight, if he does get charged, he’s going to cause a bit of havoc and could easily kill a couple of attackers. Def down late is very unpleasant, as it lets slash attacks finish wounded enemies.

Joon in the corner is bad too. At 3/70, he doesn’t really hit hard enough. But of your options, he’s the best fast mana damage. Hopefully, by the time he fires, targets will have been whittled down enough for him to actually kill.

There are no red dispellers, so taking red against that core is dangerous. But green is pretty easy to use against it, so wise attackers will bring Mel and Caed.