yes!!! I was looking at him trying to figure out what he reminded me of!

His artwork is amazing do. 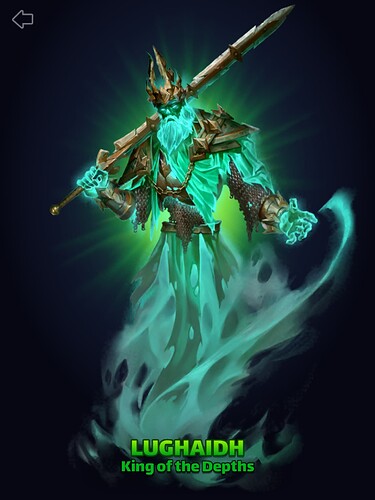 see, his art work is amazing…. But I’m not sure if they picked the name because of its association with the celtic god of the sun, Lugh, because if they did…. Well…. He’s a Sun god , not the god of the underworld who is Aodh. And he can’t be the Sea because that’s Manannán mac Lir. But then again, this is SG and when have they ever stayed loyal to mythology.

Ps Lughaigh is pronounced Lu-ee (Lewie) for all of those out there trying to figure out how to pronounce the name. Many a famous high King of Ireland by this name.

Wonder if this is a start of ripping of LotR artwork/characters. Drawn like the ghost king from return of the king

Looks like the guy i wanna take down first😅

I like your sentiment but ultimately your approach is not much different from the one you’re criticizing.

Both approaches are based on the fear of failure, that’s why it’s very important to pick the last hero.

Your solution is more aggressive, and your approach is to shorten battles in a bloodbath, the other one is more passive and relies on survivability. But they both are based on the same concept nonetheless.

IMO, neither one is right or wrong, it all depends on roster and playstyle.

Wanted to confirm yes, buff blockers work to stop his buffs to teammates ( c Sabina, mist, onyx) and the buff does not appear if he is still in ghost form and the block is cleared. It would be nice if he cleansed his teammates first

His skill is really actually bad on defense then. Thanks for the info.

I know I’m going off topic, but the start of ripping them off? This game started by ripping off LotR (Dark Lord = Sauron). Then we have:

And that’s just off the top of my head. Sure I’m missing some

Kvasir is clearly Radagast the Brown.

Wouldn’t they be useless to block ghost guy’s skill? Since he turns into ghost form and negates those ailments, to then apply his buffs anyways

They don’t stop him going into ghost form, but they do stop him from applying the buffs to teammates

But he removes that ailment by the time he shifts into ghost form. So wouldn’t he still apply those buffs to everyone?
I don’t know btw, just analysing this by order of the card text

Yeah I just studied the card, malosi absolutely cannot block because he dispels all status ailments first. Lidenbrock does this too. Ghost guy has priority cleanse

He removes it from himself, but not from buff block effected teammates. Tested it against mist , who hit him and two others, once he fired, he went ghost, but the 2 effected by Mists buff block got no defense up or OHoT

Okay, logical in e&p context. Not to me though, but I’m not the one designing the mechanics of this game

Yeah, I tested cleansing the buff block after Lug fired, hoping maybe it would reapply after the next turn but nope. It’s like fiends, if you have an ailment block up you still get the fiend just not the status effect associated with it even after the block wears off. I think he really should cleanse allies when he goes ghost to make him nice on defense.

Oh I fully understand it now. what I’m saying is that it made no sense in my head logic that a buff that’s personally his can be countered by mist and c Sabina. I just wish his skill is like baldur’s, where it’s a personal skill that effected to all without giving everyone a buff

If he’d remove negative stacks and status effects from everyone then he would have at least some niche usability (Skadi). But here he shifts in ghost form, gives defense up to everyone (one of less useful buffs, as it is too passive) and heals everyone (lower heal than Lidenbrock while she is also faster than him on first cast, when it matters the most).

Thing is this hero seems to be designed as a tank, with stats, paladin class and damage reduction on first cast of special skill. But you don’t want to use him as tank because obviously, when he shifts into the ghost form, it leaves an opening for attacker to charge their tiles. Also, he doesn’t heal himself. On flanks and wings he’d be too slow barring for VF wars or tournaments. I think he just can’t decide what he is.

Wouldn’t mind getting him just for that art though. He would never get the tonics, but he would be nice to look at.

Edit: I think the poll question ‘How do you think X is best used?’ needs to have following option added:

Killhare’s defense down debuff will not over write Lughs defense up buff.

Guardian Gazelles special will cleanse teammates of his ( lughs) buffs, keeping it for herself, will not shift him out of ghost form.