Lughaidh is in need of balance

I told you long ago that crusading against buffs

Nope, not my agenda at all. There will only ever be a very limited number of buffs given - and they should be given to those heroes that most need it, not heroes that can perform decently or well or even amazingly.

that ridiculous list of heroes that don’t need buffs is primed to tick-off half the population.

Why is this list ridiculous? I think I highlight what - 24 heroes by name that I think need a buff? Plus all S1 heroes without naming them.

Heroes that don’t need a buff:

My agenda is to keep showing the value of heroes that don’t win any popularity contests but I have found to be much better than common opinion.

But based on Heavy investment in multiple defensive entities designed to drag matches out.

Firstly I have shown that a heavy investment is not required for a support heavy team - I have used multiple teams in my examples including those that are easily obtained from SE, or Gulli, or that can be interchanged with other support heroes for slightly less impact.

Secondly, that is my daiiy raid team style - and it is not designed to drag matches out, but to survive different types of starting boards. Yes by design these will usually take longer than a one trick pony team that is designed to quickly overwhelm the opponent, but they usually take less than 5 minutes contrary to your exaggerations. But I play a lot of different styles in wars and tournies and the heroes I endorse work without fitting into this type of setup. Luigi can work as an off color support hero as long as there is at least one other instant healer. He also works very well with Grimble or other mana boosters. Myztero can work as one of multiple attack prongs with less support. Not the most optimal, but they still work well.

These heroes are good, they don’t need a buff, and I will continue showing how to get value out of them. If anyone is saddened and furstrated at acquiring them and refuses to use them then they are not my target audience and can just ignore my posts.

Off topic but there is going to be a new 4* halloween hero - a really amazing healer. Her special is called “Tidyup”.

I would just add for him not ghosting tiles. So, he hides but enemy can not fill faster mana. His other skills are great but man that ghosting is killing him

You know this because…

Which one is it?

S3 heroes all got buffs right after their release.
It was something like 30 buffs in one update.

Meanwhile, the flow of "new heroes" has opened the floodgates.
And old hero compensation have trickled or rely on costumes which is a ■■■■■■■ joke.

There is not an empty buff dispenser at the SG office. They could buff every hero in the game with a few days work. I’m leaning towards it’s BS.

So what’s left?
Drop a couple Learn2Play lectures and be a savior for players with lesser rosters? lol…
Nah… you go way… way beyond that.

The keyword here is “teams”
And that word contradicts a light investment.
For some people, dumping mats, emblems and LB into one hero is a heavy investment.
Gobbling up half a year of their farming.
Let alone entire “teams” needed to make a singular hero function well.

Some heroes need no allies to be a beast.
Adding the perfect team mate to shine a light on a dusty card is fine by most people.

Adding an entire team to force the look-at-me factor, in long matches where Luigi fires multiple times. No thanks.

Engaging in tit for tats relentlessly until all sing praise and throw you a parade?
Nah, you can try and bend the light if you want.
At the end of the day, month, year, years…
You ARE… crusading against buffs

You ARE… crusading against buffs

If we asked for a buff across the board… We find ourselves in the exact same situation as before.

I’ll take a buff for each of my heroes… But… It doesn’t mean it is needed. And with some heroes… It is less needed than with others. So yes… But vela… Yes… Buff telluria… The fish…

But a… Misunderstood hero… Not so much.

It doesn’t mean it is needed. And with some heroes… It is less needed than with others.

So drop a video like the old cynic.
And then move on.
Anyone struggling will see it, watch it and maybe try it out.

Relentless tit for tats
Endless, repetitive vids with no new content
Engaging the frustrated, combatively…
All feed another agenda
.

No one didn’t tell that and another heroes don’t need buff and yes they must be and more in need for buff but this don’t mean that Lughaidh also don’t need buff, if the baby don’t cry no one will not give him to eat, so if WE don’t ask for buff no one will give it.

In offensive raids, I use my 3-70 Lughaidh with success. Remember, his passive also helps his survivability until he can fire, then he is a slow game changer. 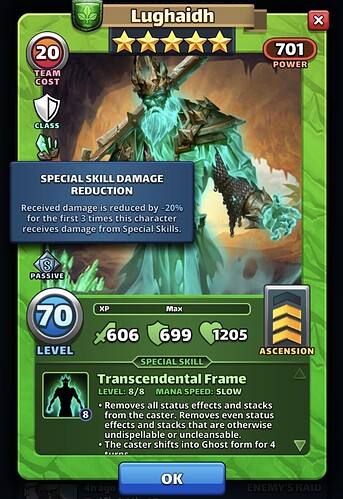 Please I really want him reworked for a slow hero he could do much more.

Defence buff and ghoat mechanic would be nice of they popped off faster. I expect more out of a slow king.

Wow! Pot calling the kettle a pot much?

You know this because…

You ARE… crusading against buffs

I am not. And all the bullying in the world won’t make me stop sharing when I feel I have something to share . So I guess you had better get used to it. and I better get used to you firing off personal attacks and requotes from years ago as your arguments. Because at the end of the day anything that anyone shares that shows how the game can be played and what heroes can do is infinitely more valuable than any toxic negativity that you can share.

anything about Luigi in that?

Yup… that was all one update.

Where’s all this bullying at?
Is there another victim card getting pulled?
The only name calling (lazy, unimaginative monkeys…) is coming from you @Homaclese

You show the same content.
I’ll show it’s flaws!
And YOUR words
not mine…

If someone ask for help, please help them.
Engage them.
If you want to prove people wrong, then keep behaving as you have been. But be prepared to get called out on it

As far Luigi.
I believe there is truth to some needing him to fire a second time, but get one shot before GG.
And those folks have likely heavily invested towards their own synergies and strategies.

Personally if I had this card
And I also had C.Ameonna.
I would use the latter.
4* are not so fragile after materials are added. But saving mats…
is truly a "HUGE advantage" that the 4* arena offers players while they develop a Legendary roster that is not at 4.8 and collecting dust

I also can see this card working well. It’s skill is way beyond anything S1 offers. A lot of people can get some good use from it.

So in the triage of buffs. I would tell Luigi to wait in the lobby and work on Aeron, Boss, Guin, plenty others

Please make Lughaidh faster. Now it just gets killed before any action.