Patience is the key.

And remember guys, if YOUR materials drop rate was higher, so would be the other’s. Every player would have six 4400 teams and the game would be boring as hell.

Oh goodie. I managed to get lumped into a “you guys” group (because all of us F2P and C2P players all congregate in a secret Facebook group that you don’t know about) and also got words that I never said put into my mouth, in one single post.

Now I could argue that the big spenders just buy the mats they need and also join alliances that kill 12* titans that give them more mats than us low level plebs never get, but actually I have on several instances pointed out that the RNG wall (as much as I hate it) is the only thing that keeps the game somewhat balanced and not totally P2W.

I might also add that “pay to win” means very little to me, as I’m not even attempting to score top 10 or top 100 anything. I’m perfectly content competing against other players at my own level, knowing full well that my heroes aren’t good enough to compete at the highest levels. I was simply acknowledging that there is indeed a steep grind for unfarmable AMs, especially for those of us on the lower end of the spending spectrum. I’m not threatening to quit the game or anything like that.

I have actually spent about $90 on this game, which is far more than I ever thought I would spend on a mobile gacha game. Maybe that amount is peanuts to you, but it is pretty significant to me. And I probably will spend another $50-$100 over the next year or so as long as the game continues to hold my interest. I will not spend thousands, nor will I apologize for not spending those amounts. If they don’t think I’m spending enough, they are free to delete my account and I’ll be happy to spend it elsewhere. Sorry not sorry.

TL;DR-- I’m barely hanging on, myself.

So it takes three weeks to open a war chest.
…
…
I mean, at this point, I should just be fkn glad I get anything at all. I half expect a picture of SG giving me the finger. like the whole company photo in front of a sign that says ‘FK U PEACHYKEEN’
…
Maybe I could at least frame that. That’d be nice. It’d be tangible at least.

I admit this made me laugh out loud, probably more so than it should have.

But this is what i’ve personally be struggling with.

It is really hard for me to pinpoint exactly where it all went wrong, but it was somewhere between SG adding the 5th Day to tourneys, and the unimaginable costs for Stronghold 21 upgrades.

It is really hard for me to pinpoint exactly where it all went wrong, but it was somewhere between SG adding the 5th Day to tourneys, and the unimaginable costs for Stronghold 21 upgrades.

it’s easy for me to pinpoint. The announcement of the costumes. That made me throw up a little in my mouth.

Now I view my play as work. I think that the only reason I am playing still is because (in June) some very unfortunate things happened IRL and I have used the game as a bit of an escape. But I highly doubt that I would be playing quite as much (beyond wars, titans) if it hadn’t been for IRL events going south.

My son has just started playing, so I doubt I’ll quit any time soon. He’s super into it and it gives us something to bond over, which obviously is good considering he’s affected by the IRL stuff I mentioned.

But, for me, it’s that my roster is stagnant. and the wait times/resource costs for things is exorbitant. new titan items are great, but well… obviously you know how scarce the parts are.
it’s a double-edged sword.
If all 120 of my heroes were maxed-out… I would be super bored also. (though likely happier with titan scores and war options… and I could level things just for fun. but that would only go so far.)

Maybe you should consider keeping Athena at 3/70 and max Miki. One of my alliance mates scored 600K+ last night on a 10* titan using Miki… A+ got him a damascus blade and a cape… “A” brought me a magic orb… just saying, titans are one of the best sources of unfarmable AM’s and Miki is a titan killer by excellence…

The struggle is real, for both spenders and nonspenders alike (and no I don’t mean that sarcastically or anything). I am a bit amused that I get berated for my opinions when they’re not exactly out of the ordinary.

I’m not planning on quitting the game in the near future, but I understand the many reasons why some players are. It’s a fun game, but dang, it can be frustratingly slow and the prices for some things are… shall I say, a tad bit ridiculous? Seriously, I don’t know how any player can sit there with a straight face and make fun of me for being “cheap”… let’s take a little look-see at some of the “deals” in the gem store.

Assuming that you’re buying gems at the best value, roughly 100 gems for $1 U.S. (your own nation’s currency rates may vary)…

Seriously guys. People want to make fun of me for not buying these things? Go ahead.

The struggle is real, for both spenders and nonspenders alike

Money spend tons of it they will love you for it

Funny thing is that sometimes it’s reversed, or both at the same time. Like how some people have 30 tomes of tactics and no fine gloves, someone else has 15 pairs of gloves and no tomes. The whole thing really is funny, which is why I choose to just sigh and wait and hope and pray. You never know when you’ll get something good. Most of the time you won’t, but when you finally do, it just makes finally getting it feel all the sweeter.

Currently I sit on a significant pile of AM’s with no heroes worth using them on… Summons are a joke to me, never brought me any 5* hero in 14 month… TC20 keeps spitting out doubles of mediocre heroes…Out of 11 5* heroes I have doubles for Elk, Horghall, Kadilen, Isarnia, while I never even considered leveling the first copy of Kadilen or Horgh in the first place… 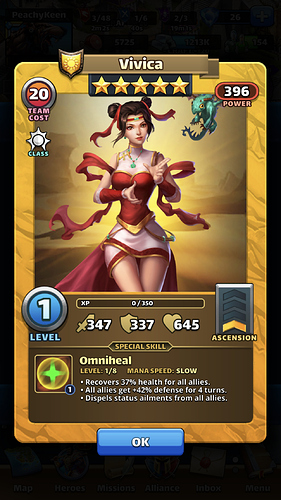 At least ill have her to work on now.

I don’t need @Garanwyn to tell me the odds on that.

RNG giveth and RNG taketh away.

How many different 4*s do you have ascended? There is plenty of variety there and has kept me busy and entertained at the same time… my interest was Just starting to stagnate… but I’m on the cusp of ascending multiple 5s… I just did Seshat ( my first ) will be 1 Scope away from Magni, should I choose to spend the Capes on him… and I can fully ascend a Green.

Ascending my first totally reinvigorated me… and makes me think that they really have their Mat odds down to a science.

I have 11 4*s fully ascended, some Emblemed. My defense team, which is sub-optimal, colorwise, in the upper 3500s keeps me around 2050-2175 range. I’ve only won a handful of diamond raids, and that’s where I would like to be/regularly compete.

Why I’m not ready to quit just yet:

Got more than enough on my plate to keep me busy for now. And once those are nearing completion, I’m going to toss more coals into the ole training camps and see if I can spit out some more.

Plus I have VIP so 30 bonus gems a day, 3 extra summons a month on top of whatever gems I earn in-game. From a purely financial standpoint, VIP is probably the biggest bang for the buck in the whole game.

I’m pretty lucky with heros and mats i guess. Personally I’ve never been able to say I’ve lost interest in the game. There have been times I’ve wanted to put it down and walk away but that’s more due to some of the people that play the game, not the game itself.

I enjoy the grind, the leveling, the wars, the raids, the camaraderie, tournaments(tho it’s flawed as hell), the people, and hopefully soon titans again. A lot of times i even play through farming instead of using autoplay just to see how big of a combo i can get. Still haven’t topped my best at 24 but I’ll keep tryin.

2 yrs so far and interest still holding strong. Think if i lost interest at some point, i would have walked away but that’s just me. I keep doing something because it holds my interest, if it doesn’t then why do it?

Idk what the right decision for you is but figured I’d just share my side of the coin i guess.

I have heard alot of this of late. Running three alliances we have also lost several people lately due to farming and pull changes. I recently had a two week long fight with Small Giant over duplicate charges and I have never ever had a customer service experience that horrible before.

If the company that bought this game company just wanted to turn a huge profit all at once and then kill off the game they are doing a good job of it. It is not unheard of for larger gaming companies to buy out smaller gaming companies who own a competitive game to their own market. Push for tons of profit right away with gem sales or promotions. and then kill that game off so it wont be competing in their market anymore.

It feels to me that that is what has happened here.

however I will say with the community surrounding the game there is still reason to stay and it can still be interesting and fun. We have found in the reps family of alliances that the key to keeping people interested right now is separate alliances contests and challenges and emphasis on the social side of the game. My hope in continuing to try to keep the game fresh and interesting for our players is that small giant will turn this tail spin around and all that time and effort will be worth it because the draw and drop rates will get fixed. They could very easily reinvigorate this game.

Anyway I hope you find some fun in the game again. Feeling like the enjoyable and stress relieving aspect isn’t there anymore is the suck.

Eh according to SG, zynga has very little(if any) to do with SG and direct handles of the game

Once you’ve been playing for a year or more, this will become more the norm… I have a bunch of 1/1 5*s but enough leveled that I’m just holding for good pulls. There is a grindy part of this game and you’re in it. Coming out the other side and it’s more fun again. Stick w it. 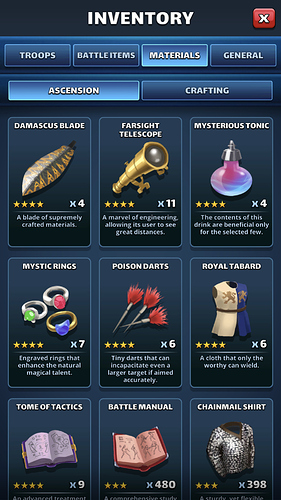 hey @zephyr1 could you add me on Discord? Discord ID BobbieDoll#1941