Okay these needs to be addressed.

The fact that you get thrown into the highest tier even when your Global Alliance rank is at 18,000 and you fight max 10* titans, finishing the Monster Island ranked 5000.

The rewards for better than participation is 400 and better, and considering there are litterally tens of thousands of teams in each tier, the reward tiers needs rework.

General consensus is that the shear amount of effort and communication, logging in not to waste energy etc, to receive the rewards on offer is not worth it.

Treasure chests are also a bit of a downer.

Treasure chests are also a bit of a downer.

When are they not? 20 unnecessary characters

Expect disappointment and you wont be disappointed.

Glad it was a Beta test…

. That was just the flow of the event, add on top of that crap loot

Very nice event , and the loot is ok. The game is for fun , nobody force you to play if you not having fun! The only problem is that they give the last 500 flags only 6 hours before the end

Couldn’t agree more. For the aount of time, effort and resources, the loot is a pittance. Our Alliance also in Hard Level Max 10* Titans(most often 8* & 9*). We could barely put a dent in the Apex Monsters. The hordes were somewhat manageable but end up wiping out your heroes. With decrease in Health Points you go through your teams quickly. We got only 3 keys and 1 treasure chest and used countless battle items for the slightest of benefit. Not sure whose definition of fun this event was supposed to be but won’t participate next time unless there’s a huge make over. There could easily be 8 or 10 tiers. Underwhelming, frustrating and maddening. 1/10 Star rating.

I agree the tiers here are wrong, they should replicate the groups used in Mythic titan (% based) or alliance quest… making the top sections even more packed is kind of crazy.

Oh and before I forget what is up with the Apex Monster attack timer, only 1 minute vs Titans which are 1.5 minutes.

It is too short

Our clan didn’t stand a chance. This event was way to difficult for us.

We managed discovered 2/3’s of the map, but it took a while to get that organized.

The hordes burned trough our heroes and resources like a fuel infused fire. Always moving back and forth to get new heroes. Fortunately backtracking was cheap.

And as a clan we can barely defeat a 10* Titan, no way we could defeat half a dozen Apex moster. We only got to give one of them a mild massage.

Needless to say the ‘loot’ was very disappointing.

This event needs a lot of tweeks.

Our alliance did not try hard for first places. We learned and will develop a plan for the next iteration.
We killed all apex monsters and opened 10 treasure chests.
Should have killled more monster hordes faster for a top result.
We endet between 250 and 300 th place in hard tier.
That was my loot : 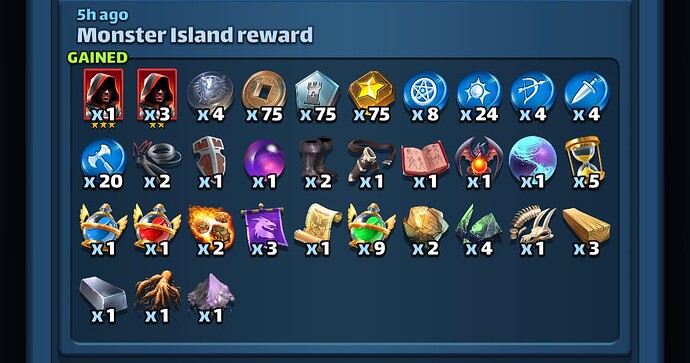 image1170×617 82.2 KB
Yes we used some items, but items can be produced, summon tokens can only be won or buyed. So the loot is not too bad. Hopefully it will be a bit increased after brta phase.

The fact that you get thrown into the highest tier even when your Global Alliance rank is at 18,000 and you fight max 10* titans, finishing the Monster Island ranked 5000.

Sounds like us, we’re ranked a little below, but doesn’t seem right that we’re thrown into the highest tier.

Our Alliance also in Hard Level Max 10* Titans(most often 8* & 9*). We could barely put a dent in the Apex Monsters. The hordes were somewhat manageable but end up wiping out your heroes. With decrease in Health Points you go through your teams quickly. We got only 3 keys and 1 treasure chest and used countless battle items for the slightest of benefit.

Similar, we did get 6 keys. I do find to be successful in the event, I was depending on time stops and tornadoes to avoid getting hit. Which means item sink.

Our alliance did not try hard for first places. We learned and will develop a plan for the next iteration.

You do have to point out what ranking your alliance is because it may be easy for your alliance, but that’s not necessarily the case for everyone else in that tier. After all, don’t you regularly defeat 13-14* titans? There’s a significant jump in difficulty that isn’t reflected in the difficulty tiers in the island event.

So my impression is that the apex monsters hit similar to a 7-8* titan, which is a bit much for our alliance. I think the difficulty tiers should be adjusted since I find it strange that alliances that are barely stringing together 9* titans are being matched up in the same tier as alliances regularly getting 14*. Of course they have no problems, it’ll be like us getrting 5* equivalent apex monsters.

My proposal would be that if they keep to 3 difficulty tiers, they should make them as: 1-5*, 6-10*, 11-14*, with the Apex monsters being roughly the low point: 1-2*, 6-7*, 11-12*. Make it a little more challenging for the higher ranked alliances. Also, they need to add in a sanity check on the alliance placement. When I look at the easy leaderboards and see that they gamed the system by making new alliances with no titan history, that’s a problem. They should have a secondary check based on war score (roster component), since that’s a pretty good indication of how well they can do in this event.

At the end, our alliance would probably get slightly worse loot, but at least it wouldn’t be frustrating where all we can do is kill a couple of apex monsters and a few hordes and not have enough time to explore the whole island.

Well, I have to agree with a lot of what has been said here.

Even with that little lot I did enjoy the event, as did at least half of my alliance. It was a bit difficult for some of our weaker alliance mates but with decent planning, just like in wars and other alliance events, that can be mostly circumvented.

All in all, a good event that needs a little tweaking in my opinion. At the moment, in it’s current state, I would call it average overall. Maybe a 4.5/10 for an overall score. If I ignore the loot vs effort then I would probably go with 6.5/10. If they can fix the above issues then I might be tempted to give it an 8/10 or maybe higher. I look forward to the next one.

And what we can say? We are 18 players, mostly 40-something level, and 8* titan is a big challenge for us, 10 And we also got placed into hard. We didn’t manage to kill a single Apex, finished with rank >12000 (not so bad, as we are around 20000 in global ranking).
From this point of view, in any other event we would be able to win a silver token (maybe three of them at best), here we got 3/4 of a premium pull, some 3* and 4* AMs, some emblems and 4 silver tokens.

We chain 14* titans, are full with 30 members, and ranked top100 in the last 5 Mythic Titans, and often top100 in alliance ranking.

We chain 14* titans, are full with 30 members, and ranked top100 in the last 5 Mythic Titans, and often top100 in alliance ranking.

And now you see the difference? We barely can take on 10* titans, less than full alliance and way outside the mythic titan ranking. Being put into the same tier as your alliance is just wrong. To make it so that our alliance can actually accomplish anything, the tier needs to be reasonable for us, but that’s going to be a cakewalk for your alliance.
It’s not a question of timing, or coordination, it’s just a fact that for your alliance, it’s an easy event because the difficulty is somewhat scaled to accommodate us. Our alliance and others like us, should not be in the same tier as you and the difficulty should be increased significantly so that alliances like yours can have some sort of challenge.

Apex monsters on hard are now approximately 6*. And you suggest to put this big monsters in medium? How an alliance that needs whole day (meaning at least 5 attacks from each player) to kill a 6* titan would be able to kill 10 (ok, say 5, they don’t need to be in top tier) apex monsters the same size in two days? All while losing their titan specialists due to permanent damage and having less time for attacks (it is 60secs for apex)? 5 attacks from each player means 210 energy + energy used to travel from/to camp several times to replenish items and replace killed heroes, so >300 energy - it is more than 10% of all available energy - to kill one.
For people on 6-10* titan level apex size should be rather 4-5*.

My alliance didnt get to participate and i cant find an explanation why anywhere, anyone know?

Sure, I mean, I’d be fine with that. I personally thought the Apex monsters on hard were like 7-8*. I have no idea what the current normal difficulty tier titans were like.

I just didn’t want to suggest upping the heavy tier and decreasing the lower tier apex monsters as I thought it’ll be too self-serving.

@Exo521 only Alliance with sore of greater then 120,000,or something like that , got to participate in Beta event