I started tracking pulls after my May debacle chasing GM. It has now been at least 407 pulls since getting my last HOTM, being Clarissa. It would have been nice getting Zocc but Rafaelle and Noor don’t interest me. I’d def like to land this HOTM tho. I understand numbers and long term averages but this is getting ridiculous. My HOTM rate is now down to 0.32% over the sample period, and i would need to get 6 HOTMs to get back to the stated appearance rate. I would like to know who validates and attests to SG coding. Odds are always quoted 99% by pull 352, i understand that I am significant outlier status, but I am way way out on the bell curve now.

i was in a similar situation to you, then chasing GM or a 5* costume, i found Bei. 3 times

(no other 5*).
But i agree that it would be interesting to know how RNG works

I also started my own track of summons. Those summons where between June, 15 and today. All free, not a single gem / dollar invested (except POV). 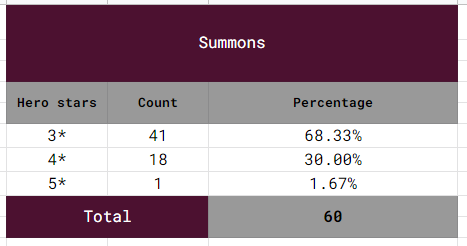 I’m sure there are plenty of players who had more HOTM than the stated odd to make up for your low pull rates.

I have never tracked my pulls and never will as I dont do many. I just accept I have always had below average luck in life and the game will be no different.

Just an update, the streak is over. It ended up being the 430th pull, so yeah… way way out on the bell curve. Now i’ll get like multiple of the next hotm which i have zero interest