Been browsing top 100 defenses and seen none so far. But yesterday, while casual raiding, I came across this one…

… a level 85 Krampus… first I ever saw… anyone else bumped into them already?

There is a Russian YouTube content creator who showed Limit Breaking her own Krampus. But she has a different nickname.

i dont wanna go up against that.
Krampus is already annoying without needing to be limit broken, i would run for the hills

I’d go my mono yellow against that and try to work in from Killhare. Malosi is very effective at stopping Krampus if you can get the timing right.

Yeah I don’t personally see ant value in LB krampus. He is anyway the last man standing in most of matchups, and I either dispel him or wait him out and save killing him for the end. Him having beefier stats won’t have impact whatsoever

We faced a couple of LB Krampus in war… 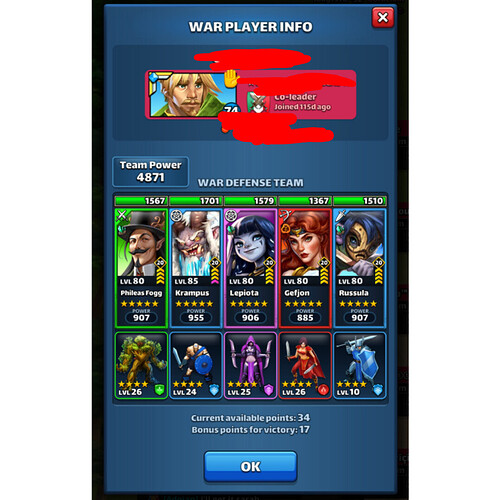 If you lose to that team I imagine “it’s because of that LB Krampus” will be said but the reality is if you lose to it you were probably losing it to a Krampus +20.

Hmmm… by the looks of things, Krampus seems to be the blue “wheapon of choice” for LB’s… his defense status should reach insane values while his special is up… making him almost impossible to kill… we’ll have to go around his taunt, brute force won’t do it…

we’ll have to go around his taunt, brute force won’t do it…

I use limit broken Sonya with costume bonus. Dispel is nice, and opposing 5* waste tons of time trying to kill her.

May be campus is a choice.
But it seems like +20 emblems campus is more than enough for defense.
I will go for limit break a fast snipper who fits in defense and offence.
Check that campus card power 955 !!!
Imagine it with , say Finley or Rosula !!!

Imagine it with , say Finley or Rosula !!!

I found Lv. 85 Morel instead

I found this while I filled my raid chest. 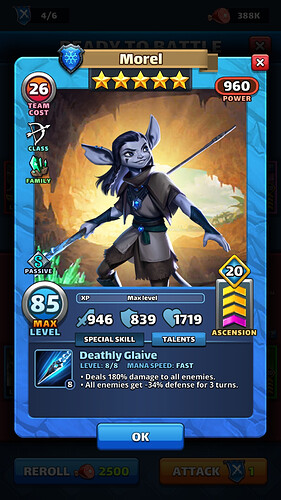 Fought a LB Krampus and Richard so far. The Krampus team took several tries, not because of him, but because of bad boards.

Richard I didn’t even notice.

So far it seems to me that LB makes far less impact than emblems or troops.

I limit broke my Krampus right after i got the 5th aether from tournament loot. I went all def in with emblems. He’s been keeping my raid def at about 80% win and in the high 2600 to mid 2700 at all time.

Are you sure it’s Krampus? I bet you have some absolute killers surrounding him.

Would be interesting to know if this is higher than you normally are ( and by how much) Also if any has any details on typical reduced damage per hit received by him that’d be nice too. I will need to keep an eye out for one broken and one not and test a few seshat hits

Yep. I did predicted this happening:

A survey: which hero you want to do limit break first? 3 star, 4 star or 5 star on your defense? General Discussion

After this raid tourney or when some alliance open their war chest, I bet someone will be limit breaking a 5* blue.

As for Krampus, I see little threat him being limit broken. I will use my monopurple: costumed Rigard/costumed Sabina, Panther, Alfrike, Kageburado and Ametrine. Most are dispellers and Sabina costumed renders enemy buffers’ buffs useless.

So found a couple of un broken krampus with 20 emblems to hit to test my Seshat damage.

These were hits when he didn’t have his special active so not affected by the scaling D. I used no attk buff or def reducer.

If anyone finds a limit broken version to compare it would be interesting. If I find one I’ll report back.

I went up against LB Finley yesterday. First hero imma lb is black knight. Need them red ones.

And there is this