Went through the tutorial and there was no message of any sort saying tutorial ended.

I have now used my first set of limit break items on the random 4* hero it picked for the tutorial.

I just straight up denied the tutorial from proceeding by clicking it away. I love my kiril, but ain’t no way he’s getting any of my limit breaks

Hahaha. Me too. But I kept wondering if my nordri +20 was a good option for LB…

I’m sorry for your loss

I did the same thing. Just added limit breakers to Helo.

To be fair, the tutorial said to click there. So I did. I assumed there would be some sort of talent tree or further explanation.

There should have been a confirm button at least.

Well done EnP for your sneaky guided tour on aether shards. It is very easy to get mistaken and use them on an unwanted hero by accident.
I warned my alliance about it. I know some of you may say read better. No problem. But still, the way it’s put up is very sneaky!

E&P is trying to force me to limit break Graymane. 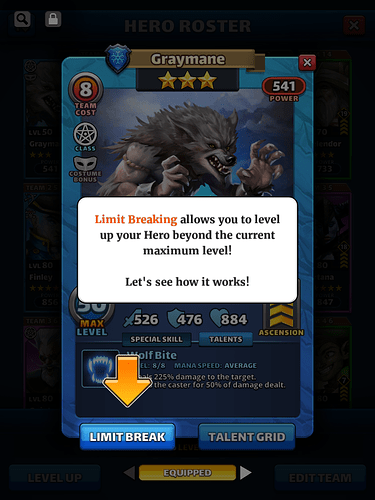 Am I missing something here?

it is just a demonstration. in the end you can choose whether go on with gray mane or keep your aethers for an other heroe

Am I missing something here?

You can still escape from that step… there are description said that, you can also limit break other heroes… so just tap close in the next step.

I had to shut down the app to escape what seems to me to be a trap or at least an unwanted use of limit breaks.

I was sent to max nordri but he’s the one i’ve wanted… but i feel you all.

If you click on limit break button, it will show the aethers required and you still have a choice to go through with it or close the window

For the record, EnP always does this in tutorials - i remember in the beginning that the game “forces” you to level up Sharan or someone and its not a demonstration…

Stupid way of showing how things work, but this is SG…

At least that Sharan one teaches you basic information on levelling and stuff, ham and whatsoever comes and goes. this is valuable resources you may ‘waste’ on someone you didn’t want to. They can’t even give you 5 free small aethers to try it out on a rare hero.

Thank you for posting this. I was very hesitant as I went through the tutorial including several force quits hoping it would opt me out of the tutorial.

Yeah graymane is garbage. I’m glad that I mistakenly leveled up Helo. He should be relevant for awhile.

That sucks. I stayed away from limit breaks until I read the other posts. Those cheapstakes SG couldn’t even award sufficient ether for my legendary hero - 4/5.

Does the tutorial appear again after force quit?

this is the point.
if i start an tutorial and she said click there… why i do not click? just look the comments only 1 or 2 see the escape button others do force quit to escape.

For the record, I pointed this out in beta but got ignored