Life as a new FTP player in today's E&P

Not to hijack Homaclese’s thread, but @saros…how do you like using Garyas? I’m levelling him but even the thread about him in the forums has no feedback on usage for him. Any advice would help, thanks!

Now you get how the F2P feel, always fighting uphill.

That is certainly not unique to FTP players. The majority of the player base falls into this category, apart from the uber whales. On my main account my offensive team usually would not match most defensive teams in either TP or “metaness” of the heroes.
I have taken it upon myself to progress this account as quickly as possible which makes the battle more uphill than it otherwise would be, with my sub 4K TP team most often taking on defensive teams in the 4.6 to 5K TP range. I actually find most raid tourney battles easier because the TP differential is usually much smaller than my regular raid TP differential.

Congrats. Given yours (and my own recent) experience, probably things have changed nowadays and the game forces you to focus on one team rather than chasing roster depth. So I get what you did, maxing your best heroes, including 5*.

Yep, I think the large amount of PVE content is what pushes one in this direction.

There is one huge problem though - getting the decent heroes for that team, and the 3* mats to max them. Certain 3* heroes are useful but as you already feel it, they need to be replaced ASAP. For the 4* a regular F2P won’t have the 3* mats.

Mats will always be somewhat of a bottleneck but I have gotten almost all of my 3* mats from PVE content, whicih is why I am pushing to do more and higher level PVE - more mats, more chances at pulls. I had to wait a few weeks for 2 orbs for C C Viv and they both ended up coming in the lunar festival levels. Other than that I have had no shortages so far.

You see, you aren’t exactly a regular F2P - not only because of the experience you accumulated playing the game. No regular starting F2P will be accepted in an alliance killing 13* titans on a regular basis. Or rather, very few could hope to be, and always on the benefit of some older player who will vouch for them - as is in your case, more or less.

I have been in this higher hitting alliance for about 4 weeks I think, of which I week I wasn’t playing. But regardless I have had virtually no mats from titans, including 3* mats. As stated I have gotten most of my mats from PVE stuff, and mystic vision chips in semi regularly too.

That means that almost all F2P players struggle with 3* mats.

I remember having a lot more trouble with this on my main account. It has been much easier on this account, but not because of access to titan loot but because of more mats available from difference sources.

What I mean by that is: F2P players go for roster depth instead of maxing an OP 4* + 5* initial team not of anything else, but rather of pure necessity and lack of quality heroes amongst their limited pulls + lack of 3* mats to ascend them.

You max whatever will help you with your progress. Having had my experiences I would vouch for maxing whatever you have to form your strongest team, whoever that is composed of,

My defense team consists of unleveled, unascended 3* and 4*. I don’t rely on defense to climb arenas.

You have a nice main team there, and some nice wins. I put up my strongest defense team (and always will) but it certainly isn’t there to climb, it is there so I don’t drop below 2250 cups. It gets battered at anything above that.

This account of mine had won every war without fail except the first, tutorial one.

Quests: At this point, only the tougher quests’ final stages of quests such as Tavern of Legends remain beyond my reach, or rather, I simply don’t have enough resources to craft the bombs I need to pass them all yet. Trials, Omega, Rare quests - all able to be completed.

That is very helpful with progression. I have one more level left on TOL, should be able to finish all next time.

Summoning luck: Way below average. Even from S2 and S3 portals regular pulls for this account are season 1 3* dupes, and not useful ones at that. So a lot of Graymanes, Hawkmoons and Briennes (useless beyond the first IMO), Renfelds, etc. Even in the few 4* there are dupes (Kiril, Boril). Only one 5* and it’s crappy Balur.

I have 6 5s which is above average, although Horg and Obakan will probably never be levelled. C C Viv and Peppermint have been great. Joon is OK but a long way away from any action as I have more useul 4s to level first. Xnol was a pretty luck pull too, will bring him to 3/70 next probably.

I am jealous of your C C Kiril he looks so good.

Other than boosting mana with the bard family, I’m trying to see the best place to pry him on an epic team

I am not sure how I feel about that advice any more. It has always seemed pretty good advice but having gone through my experiences in the last 3-4 months I feel that it may actually be somewhat disconnected from reality.

i always thought that that advice was rooted in the fact that, early on, especially for new players who actually didn’t have the experience that you do, your resources are limited and for most players, being able to max multiple 3* and/ or 4* heroes is a much more efficient use of those resources than putting them into only one or two 5* heroes that you can only get to 2.60 or whatever. i think since you know how to allocate resources based on your sum total experience in the game, maybe that advice isn’t so applicable to your F2P account.

in general, i still would give that advice as far as maxing heroes and embleming them. i don’t know that i would suggest that strategy for using aethers given my experience–not that i necessarily regret LBing my 3* and 4* roster before my 5* one, but it’s quite eye-opening to see how it’s the small aethers that end up being the roadblock.

I maxed him only because I had him very early. He’s the typical D&D bard, a jack-of-all-trades and a master of none. For example, his passive (halves effectiveness of opponent’s attack debuff - like Skittles or Scarlett) is useful, but not the most useful amongst the bards - I strongly prefer Zarel’s instead (which halves the effectiveness of their defense debuff). His shot is decent enough (given his stats) to be en par with Sonya’s for example, but he lacks her dispel and is of Average speed, compared to her Fast speed. He buffs tiles with some additional mana bonus, which is probably the weakest of the tile buffs, but is still a decent counter to opposing Jott’s or Alexandrine’s tile debuff. At least his stats are higher than those of classic S1 heroes which is the only thing really vouching for him. His mana bonus of 5% helps slow heroes charge with 12 tiles, which is good, given the fact that some of my more powerful heroes currently (Zarel, Ingolf) are slow and I have to use them even in raids. So as you can see, his abilities are all over the place, have some minor to average impact in a fight, but none is powerful enough by itself.

I guess that in your case Garyas should be leveled if only for the 4* tournaments. Having a 4* bard in 4* Rush is essential to make a lot of heroes charge with 6 tiles. Also, a 4* bard could be useful to bring costumed season 1 average heroes like Boldtusk or Kiril to a tile break of 9 in 4* tournaments or Epic challenge events, provided you unlocked their mana talent and have no other S1 heroes on the team of course. Also his passive can be useful in said tournaments. Even if you have the other, more useful 4* bard, Zhabog, Garyas still should be leveled because there is a number of no-red 4* tournaments.

It’s the 4* blue bard in the upper left corner of my Hero Roster screenshot. His name is obscured though.

Yes, as other said it, the Vivica’s drake familiar comes from the ViP Pass, which you can get several ways:

It takes some effort, definitely not unrealistic to do, moreover you don’t have to level all 20 at once - you could do it over several months. First one gives you 10 days of ViP, second and third also - there you have it, 30 days of free ViP for only 3 alt accounts brought to level 10.

That was EXTREMELY helpful. Thank you and I often forget about the 4 tournies with there being no 3 star mana troops. I have Zhabog too so now I have the ability to stack red OR blue with the mana boost. Much appreciated!

Well and truly solidified myself in diamond

This defense was almost made for my purple stack with 3 front yellows. But it has highish cups so clearly it wins enough when the purples dont come, and 10 tiles didint come early for me (or it could have ended very quickly). My initial play may well have been sub optimal 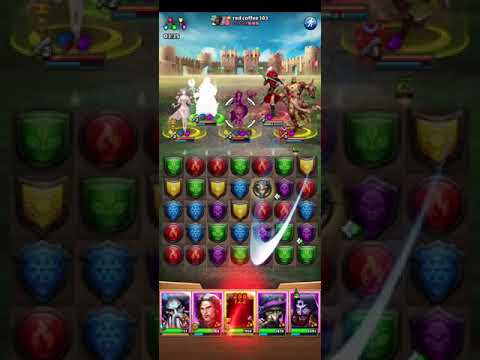 Xnol is quickly becoming more valuable than tyrum/c tyrum/aqeela in that 5th slot, although still at 2nd ascension. I think post nerf people dont give enough credit to his impact in purple stacks.

I definitely do reroll a lot - i usually filtet out <30 cups gained but also need to be careful selecting the opponent when >30 cups. But slowly and steadily i am able to take on more and more challenging defenses

Love seeing the progress Homa. Makes you wonder how your original account would be if you knew this much about the game back then.

And dude, I have no idea how you won that battle. Very persistent you are!

Ahh, the joys of raiding with a stacked element! The large cascade at the start of the tiebreaker that yielded 0 purple tiles (or maybe one I might have missed)? That kind of frustration I definitely do not miss.

Big tip of the hat for the win though. 3 seconds left is cutting things kind of close!