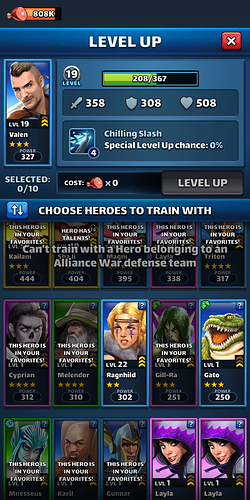 I’m not in war iv reset me phone and still the same.?

It says: " Can’t train a hero belonging to an Alliance War defense team."

No read I’m not in in war 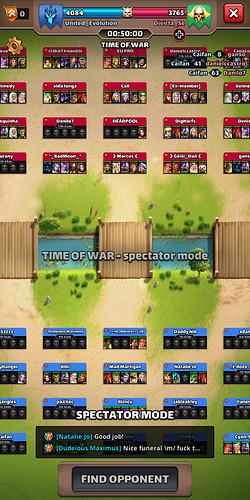 I know. I know you are not a participant in the alliance war. And i know you are not allowed to level your Valen with whoever you want to feed him with. I am just emphasizing what can be read on the first screenshot as other forum-users may tend to miss it due to its grayish font color.

Kinda hard too take a ss with that visble haha.
So how is this a solution when I’m not in war and can’t level my valen

In the last war I could level up my heroes of mythe war defense team during the war.

I’m not in war that’s the problem

I’m not in a war look at the pics spectator mode.

Maybe you are in a war in another alliance? Did you swap alliances?

You aren’t in the war but I would bet that the hero that can’t be used as food is in the team that would be your war team if you had opted in. So check tuesday how the not opted in war team looks like.

I think you previously SET a war defence team as part of the war tutorial. You then opted out of war.

HOWEVER the system still remembers that hero usage & attributes those heroes to your war defence team, even tho you’re not actually IN the current war.

I would say you’ll have to “edit” your war defence next matchmaking period & hold off on “eating” Ragnhild until then.

Ok this makes sense now iv only done the 1 war on that account and ragnhild was prob on it.
But I’m not planning on war with this account as yet so basically stuck with it till I do.
There some sort of issue there

Haha thanks for the tip but not really ideal for every player to do that really if they not in a war or going to soon. Fair play though to not accidentally feeding someone you might wanna keep but could have the extra pop up of “are you sure” yes no

They do have that for the higher rarity heroes (3* and above). Then for feeding a 5* there is a SECOND pop-up asking if you’re really really sure you wanna do that.

Yeah I know that why not it available if someone who was in a war team not have the same rules. You got the ohh I might wanna keep them nice or yeah I wanna feed them as no used to me now lol

The main reason I would guess is to avoid people fielding an invalid war defence.

Any war defence which is invalid & has less than 5 heroes is removed from the battlefield, thus would give some disadvantage to your alliance (if you were participating this is). You MIGHT be able to feed away the heroes outside war time but I am not sure.

Once this war is done, I’ll give it a try and let yah know

Actually did manage to feed away but now got this 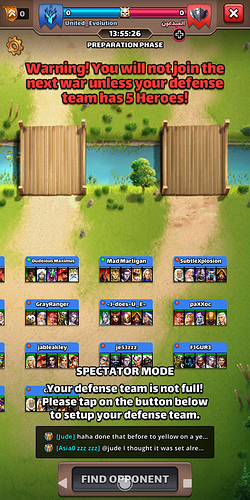