As title suggests I need input on who to LB. I already have Mitsuko done and red is my weakest color by far. I filled out Marjana since I don’t have her costume. Elena and Khagan are sitting at 3.70 and have been for years despite having 28 rings. I could Max them and still have plenty of rings but with soul exchange they may go in if needed on a must have.

Anyhow I’ve seen both versions in the LB database and I lean to Russell since he hits harder and never misses plus adds burn to nearby. I know Yang can do multiple hits but she’s only slightly better with that than Misandra after they nerfed her 2x in beta down to 50%.

I have 8 5* red aether’s and haven’t pulled at all yet in s4. I have 24 pulls and still have to finish hard from providence 14 or so which will give me a few more. I’m done pulling in s2,3 other than the occasional pull when farming and once I finish s5 I’ll pull there to but for now those 2 are the choices. I pulled their cards for comparison below from the database.

BONUS-Would you lb silvaria? I have 10 5* green aether’s and frigg already lb. 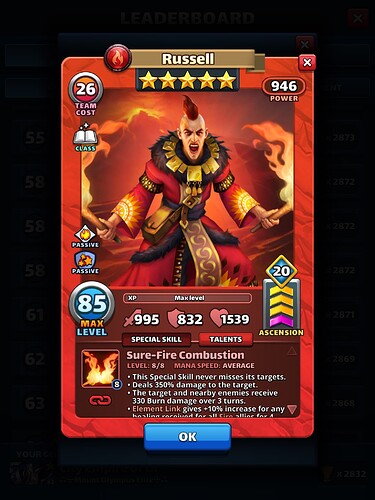 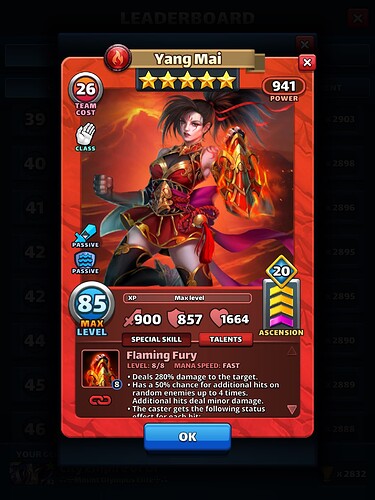 I did lb mai… But i don’t use her nearly enough and when sg nerfed her mana she gives… It really affected my fondness for her. I’d lean russell or wait

I have Yang maxed and emblemed but in my opinion she isn’t worth LB, she is usefull but not hood enough. Russel is better and I will LB mine at some point.

Personally, I would do neither, but if I had to then my pick would be Russell. Yang Mai is probably my biggest disappointment since Clarissa…

I would not do Yang Mai. Have her, Marjana and Russel. I did Marjana, because she is fast. I use Russel against dodgers or blinders, so he is not always in my red attack stack, Marjana is. I am hoping to get her costume one day. Khagan would be a good choice for challenge events. His mana boost is great, his slowness can be overcome with mana potions. He is even better with costume bonus and a magic troop.

rusell much more better than marjana, guaranteed hit and will become fast once fires.

I am waiting for emblems for Russell. Once he gets it i will LB him and also Tahir will LB once i level him. Sylvaria for me is a underrated sniper in disguise. I will LB her when i am done levelling Heimdall. I use Russell on a lot of fights with Dodgers in wars. He hits pretty decent even without emblems.

Yang Mai is probably my biggest disappointment since Clarissa…

Funny you mention Clarissa… The ONLY non s1 I have gotten in over 80 attempts from ha10 is Clarissa. Lol. I max emblemed her and lb since my purple wasn’t great until the last challenge fest portal where I got costume g. Panther on single coin pull. I still use Clarissa with panther, sartana, Domitia or grimble. I know she’s not a dark gravemaker but for me being ftp now for years it’s good. The 1/80+ sucks.

Thank you all for the replies. I was leaning towards Russell since Yang got the mana nerf and in beta they knocked her extra hits down 2x despite nobody asking for it from 70% to 50% which makes her slightly better than Misandra.

I have 8 aether’s so I’ll probably go with Russell and if I have 3 still left. Plus I have 25 pulls in s4 and will have 35 total once I finish hard mode so if I do get Elizabeth or someone from another portal I’ll still be able to lb them as the red quest will be back by then.

Marjana would be the easy choice if I had the costume but I don’t and as I said I will have another 5 if I do get a good red. I just think regular Marjana vs Russell I have to go w him since he doesn’t miss and burns 3 etc.