Peridot is in my attack team for war with cobalt. She works well.

Liu Bei is also in my war attack team with Evelyn. 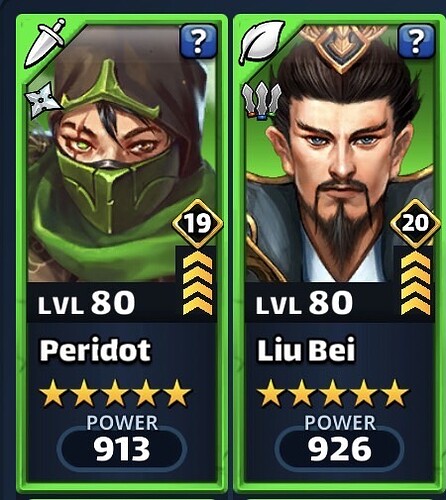 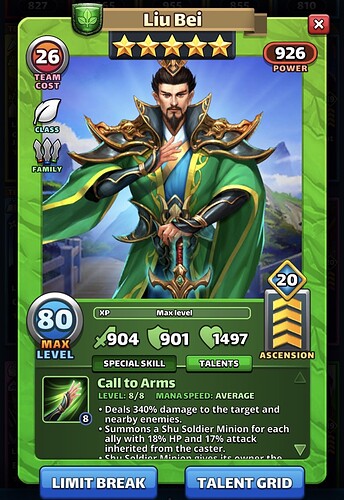 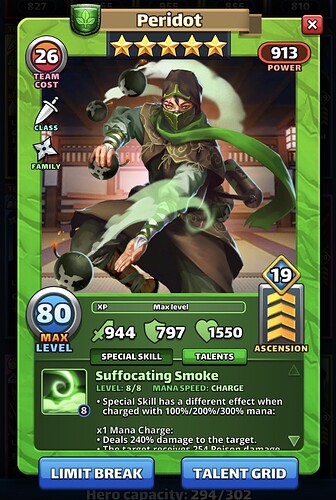 These are my other green maxed 5*

My vote goes for Peridot just because the extra attack from LB will increase her DoT and make her more lethal. Liu Bei’s minions will be sturdier but I think Peridot will benefit more from it. Here’s a poll

I didn’t vote as I don’t have Peridot but I don’t think you can go wrong with either.

I love my LB Liu Bei

I don’t have Peridot but I feel ninjas are bit slow, my war team is doing great after adding Liu Bei

I don’t have Peridot but I feel ninjas are bit slow,

I do have Peridot and I don’t use her much for this reason. 3 charges are too slow to get and her first charge isn’t good. I would not LB mine

Oh that’s interesting, I don’t have issues using ninjas because getting to the second tier is at average speed (9 tiles) and even that is fairly useful (I mainly use Ruby and Peridot). If I get a diamond then even better haha. So comparing Peridot to Liu Bei at average, both do damage to three, but Liu Bei creates minions for all, while Peridot does DoT and accuracy debuff. Both are useful in their own way…

Yes if you can charge ninjas to 3x they are really good but board is not favourable always, most of the times I feel Milena is slow

so ninjas are too slow for me

If you have a few minion makers, especially other W3K heroes, no question it’s Liu Bei. If you don’t, I clearly say go peridot.

There are a couple reasons I feel this way. Liu BeI will be good on both D and O. Ninjas aren’t consistent on D. I won’t say they don’t do well, they do, if they fire correctly.

On attack, I do like ninjas A LOT. Peridots skills are nasty. I wish I had him/her. The speed is nice, that first charge can save you.

Ultimately I say Liu Bei. Fighting him on defense is annoying because I can’t just power through his minions if they’re protected. You need a minion remover imho. Peridot can be cleansed. Just my thoughts.

Thanks. Liu Bei will be first.