Laohu passive contains Attack and abilities of minions owned by enemies are disable. If I tested it, only attack is silenced, MaM minions healing is still active, also Inari minions still gain mana for enemies.

M&M’s special boosts health over 3 turns in addition to her minions giving health. Is it possible that’s what you’re seeing?

M&M descrption is: Minion recovers 15% healts for its owners…. Its a minion ability
I think its should be disabled by Laohu passive 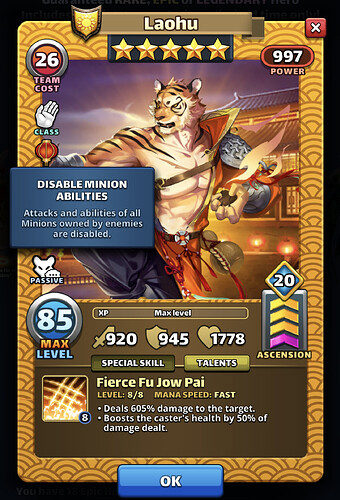 Based on the description of the passive, lnari’s minions should not be giving mana per turn to the enemies. that’s odd.

In the main thread on this tiger, Player shared that Tiger had to die before LOTL’s minions could resume reducing mana.

My question = was Tiger dead by the time when you noticed Inari’s minions giving 7% mana to enemies?

I understand her (Miriam and Midnight) minions give health but her special also boosts health. She will still boost health over 3 turns after firing her special even when going against a Lunar hero.

Its can be a reason why, I forgot her special skill also boost healt I will test it again and wait for 3 turns.

The healing (not boosted health) component of Hulda and M&M’s minions isn’t technically a status effect and can’t be blocked (e.g. Malosi, c-Panther) which I’ve always found odd -but checked and it is properly shut down by Laohu / Xaiotu passive.

If inari minions are gaining mana that seems like a bug.