I also maxed and emblemed my Waterpipe, so I also used all the ascension mats and emblems, but I do not support nerfing the Lunar hero passive.

i agree, better then another nerf and millions mad and frustrated players

40%? more like 17 cards that are impacted by the Bunny and Tiger. Of those only 8 are even in the meta. The rest are not even relevant.
The only good thing about these 2 cards is the passive, On their own they are just snippers with a decent stat.
These cards will not feature in defense, So all the minion cards are still valuable in offense.

I was hoping for this rant to start but not so early. We all know SG will sell these cards and then nerf once the event is over. So why this rage. These are 2 cards which will never feature in defense. I like the regular skills of the bunny and tiger more than just the passive. Bunny can hit very hard and hurt 3 cards with HOT cards for 4 turns. Read M&M, If she fired, and the bunny hits it keeps hurting the M&M and her flank as long as she Heals every turn. Effectively 750 damage over 3 turns…

I think many players will just pull for HOTM

That’s what I did and got the Yellow Tiger…not got this HOTM yet. Did less summons in December and have 8 Baldur…and less again in November where I have 10 Morax. Like I’m not a whale but I did 5 summons and got 3 Morax at one point. It was ridiculous.

I have had the same luck as you (5 Morax, 3 Balurs, 2 Celis…), until today, when this puppy finally showed up 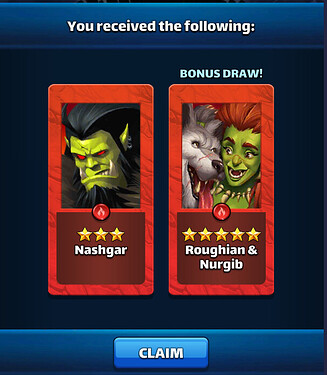 Well, now that you have 50 pulls lined up (assuming you succumbed to the whale carrot

I have had the same luck as you (5 Morax, 3 Balurs, 2 Celis…), until today, when this puppy finally showed up

Well, now that you have 50 pulls lined up (assuming you succumbed to the whale carrot

But not for this event. I’m in the market for a Bard so I’m waiting until that portal to be bitterly disappointed instead.

I’m in the market for a Bard

I hope you get them!

Although, is it just me or anytime you hear a “bard”, you think of the first Witchers?

I do DnD as well and have a Bard in my group. So I usually think of him tbh

Thank you for your reply.

I somewhat agree and disagree.

Developers are actually selling these lunar heroes because of their passive, which is way too overpowered in my opinion as they are active without even firing any specials. Putting aside WP, we can talk about the forgotten tank who was once a top tank ie. Bera.

With these Lunar Heroes, Bera can no longer function properly as a tank as her special is to poison and prevent the opponents in getting any minions ie if they brought any minion makers.

As no defence is unbeatable, We always try to set the best possible defence from our rosters to prevent opponents from getting any one shots.
However, (Putting rng aside), with such passive skills, it literally deviates the game from smart plays and tiles movement because all they need to do is to dump tiles into the tank before getting their specials ready as the tank (in this case bera, would be deemed useless)

I agree WP is somewhat OP but he is definitely beatable. There are perfect counters such as tower heroes.

I’m calling a nerf on such passive because it destroy the basic gaming mechanics of the game (ie, to win a match, one should match tiles cautiously, get your specials and kill but not recklessly which would be allow if you have these Lunar heroes)

However, it would be unfair for players who spend $$$ chasing these lunar heroes, same as those who chased Waterpipes etc. Once again, the developers shot themselves in the foot.

Zynga only wants money. That and that only.

When I did a quick check in December for Apple/Google combined income, EP contributed 22m of the total 54m for these golden geese. Extrapolating that, EP provides about 20% of total revenue generated by Zynga.

That’s how profitable this game is. Revenue from This game is expected to cross US$2B in 2023.

And Zynga needs to keep it this way for a while till a new golden goose is found. You can Google for TT financials if you want to know why fundraising has been elevated to a breakneck pace, and isn’t looking to slow down.

You can say that This is an extremely lazy way to “balance” the game without nerfing high revenue generators. I would say that Zynga intended It this way to keep revenue flowing in.

Zynga has already made a tidy bundle off Waterpipe. Sorrow is yet to be released. She will make another tidy bundle.

By releasing Tiger and Bunny, Zynga will generate more revenue for sure. Will it be another golden bonanza ? Can’t tell till March or April 2023. Will these 2 Lunar heroes be nerfed? Maybe after portal closes. Nothing is for sure in this game now.

Will there be more OP heroes released? For sure. William, the Blue Hippo. Luna. Cardinal. Milady de Winter. Loads more to come.

If player base accommodates these type of heroes, with this type of passive, Zynga will continue to release more of them.

As some have mentioned, this portal and these Lunar heroes are testing the player base. To see how far Zynga can push the boundaries.

And based on the SS shared in another thread, it looks like the upcoming Feb 2023 Valentine event may include a portal, which may or may not be accompanied by a quest (since it’s only 8 days).

This game is going the way other similar games have gone, as they matured.

Players are then left to decide the path to take.

Let’s see how much worse this situation can get.

Zynga will pull back a bit when revenue generation is significantly affected.

In the meantime, you need to accept to agree to disagree. Not all players think alike.

There are always a few camps every time an interesting development like this explodes:

im glad they realized this passive, better than anther nerf of m&m and waterpipe and simmilar creazy heroes, this heroes will be still op in offense but lot of players will change defense, so it’s great move by SG to force players to make changes and not to nerf heroes and mske more players mad on all world…
this heroes have op passive but rest is meh so its great balance if u ask me

Here’s another take on this whole situation - say you pulled WP or MnM and spent blood and sweat levelling them up and pouring money & resources on them - then they get nerfed - they are permanently damaged. It’s like you bought a sports car with a V8 and the company comes and swaps it for a V4 later and there’s nothing you can do about it.

This is an alternate nerfing mechanism where no hero is damaged or reduced in any permanent way. Bera just needs to survive long enough for the lunar hero to die and then her minions start doing their thing right away. Same goes for other minioners.

Personally, I prefer this mechanism as it keeps the gameplay interesting w/o the constant threat of nerf hammer to your fav new hero.

I agree we don’t want to hurt people who leveled a hero, but the same applies to people with Lunar heroes… they kind of suck without the passive.

My take is that unless you’re at the highest levels of gameplay it’s extremely unlikely even one opponent will have a Lunar hero. Or if they do, then they’ll have just one, and it will affect just one war attack. Unless they have six, it won’t make a big difference in wars. In tournaments, I do see a much bigger impact to minion heroes, but even there the pool of players is big enough (i.e. many of them still won’t have lunar heroes) that it probably won’t be too big of a factor. I put Waterpipe on defense this current tournament and am at an A defense still (I’m probably in the top 1% of players, roster wise). We’ll see what happens in a few weeks or months to tournaments (maybe it just takes most people more time to fully level heroes), but for wars and regular raids, I don’t see much of an impact except maybe to the top 10-25 alliances where people are expected to have six fully leveled Lunar heroes.

I pulled him, should I use darts on him or is he just a disable bot when I meet a Waterpipe and Miriam team?

80% of the time just a disable bot. But seeing his skills, he does work well as war survivor at the wings. like new age Morgan le fay