And server crashed during the first attack

Server went down during my attack…

Here it died just after I won the first match…

Crashed during tavern boss, so the troops I used are no longer eligible.
Nice work.

The servers are at full capacity again.
I could not access the game.

yep mine crashed midway through a tavern level

Now Again!!!
I loss titan attack, the game drop me

lost my war flag when i was winning it… 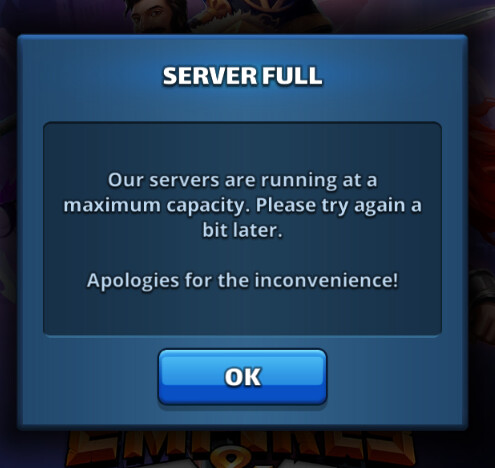 Things working perfectly again, I see. First, literally no announcement that the war was back in, then after my first attack, things started to become massively laggy. And of the course the coup de grace was losing connection during my second attack.

These last few days have been excellent SGG. At this rate, you’ll have alienated your entire player base completely by the end of the month. Incredible.

Make 1 attack and make me out

Got kicked out in my 2nd battle… Cannot even reconnect due to server overload.

Happened to me as well. This is an unmitigated disaster.