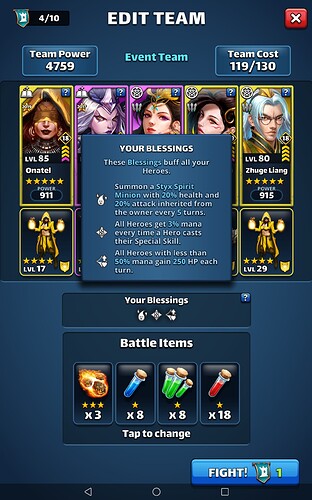 The all heroes with less than 50% mana gain 250 hp each turn doesn’t work, or at least it doesn’t show it.

I have a video, still loading (will add it when it’s online) where it clearly shows that heroes not at max hp and clearly under 50% mana don’t gain any heal each round.

But there is the 5 turn blessing counter (for minions every 5 turns) and when this reaches 0 it heals all heroes under 50% mana for 250 hp. But that’s not what the blessing says…

Here is the video. Zhuge Liang is damaged through the poison and under 50% and gains nothing in that round.

Hel is the whole time under 50% mana, highly damaged and gains nothing. Only when the blessing timer runs out and everyone gets the minions she also gets the 250hp heal because at that moment she’s the only one under 50% mana. But again, that’s not what the blessing says.

Thank you for the report. We’ve managed to reproduce this issue here and will look into fixing it. I’ve marked this topic as a known issue now.

Hardest tower made harder by no guarantee blessings work. Should not need to check forums before picking.

Also experienced this, didn’t recognize it with the first buff 250HP because I also had Hulda, but with the second time I wondered why I do not get 500HP but see my hero’s death on the next hit.
Great tower but the buffs should work!

Same here. Realized this only after picking this blessing twice…

Same here… heroes only gain 250hp once and not on subsequent turns while still under 50% hp… hope it will be fixed on nect tower event!