In other words You want me to start using my 5* heroes in Early so they can be cursed? What The Hell is going on with this Game?.

That is bad. No official SG announcement of 4* heroes being non-eligible for higher floors either. Can someone else confirm? It could also be a Team Power issue. Could you try it with a bit higher Team Power (4000+) but still with some 4*? Thanks in advance. Because I can clearly see the 4* heroes cColen and Wilbur on the team of the current top 1 event team.

With a team power of 4300+ Was Able to get in. But that’s not the point. What about users that don’t have A lot of heroes? To choose?.

With a team power of 4300+ Was Able to get in. But that’s not the point. What about users that don’t have A lot of heroes? To choose?.

Yep, doesn’t seem fair. And the no official announcmenent makes it even less fair. Not that I expected anything else from SG.

this is a big no, I main carol and gullin in the towers. There is no way I could even survive these levels without them

Hi! Thank you for the report! It seems like we have an issue when using a costume of a hero that is cursed. It should be allowed but due to the bug it’s not. We are investigating the issue! My apologies!

This NT seems like a super bad deal now.

Cannot access on D1. Most lost 10 flags. Those 2 tower flags are acceptable. What about time? Time is irreplaceable. Active Players would have planned their playtime. This bug disrupted their scheduled playtime.

I understand and appreciate SGG trying to be helpful and “hold back” attack teams “that may not make it”. Items are allowed right ? Maybe some players are really skilful with item usage.

One of my other games only issue a giant advisory : this stage is blah blah blah. Your attack team may not clear this stage. Do you wish to continue?

I have to click yes to continue. This I understand and appreciate.

Looks like as @Saros posted you can use 4* but team power less than 4000 is not allowed. Regardless it’s an important change that should be communicated.
I think at the moment SG totally misplayed the whole situation. I usually don’t criticize them, just to criticize whatever they do. Here I think after a serious issue, not extending the duration of an already difficult and time-consuming event, and giving “two flask compensation” which really is not compensation at all, they again lost some trust of the players.

I understand issues happen, but you have to think about how to satisfy customers (we as players are customers). Here I think SG didn’t solve it well at least at this moment.

Still not something right in it though @Petri @Staff_SGG. I lost base Boldtusk to curses so have selected his costume and I’m getting the below message: 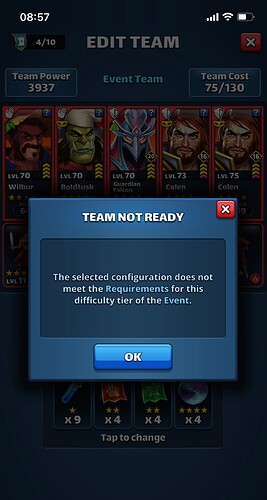 Looks like you need to exceed 4000TP. Either it’s a bug or SG introduced a change that players weren’t informed about.

Quoting staff from the other relevant thread:

Hi! Thank you for the report! It seems like we have an issue when using a costume of a hero that is cursed. It should be allowed but it’s not. We are investigating the issue! My apologies!

Hopefully this is the case. Otherwise …,

I was playing below 4K up to this point? Stupid tower…

Looks like it’s a bug with Costumes on already cursed heroes.

oof, this go of ninja tower just does not seem to be working out, huh! i wonder what happened behind the scenes to lead to such a bug filled release?

Oh man, NT is grindy enough without all these bugs floating around!
Double points, hidden eligibility requirements, costumes not recognised…
After changing the event to include a completion paywall, you might think about testing it for more than 2 mins per update before releasing.
And not even an apology in-game, but here’s 2 flasks to play our broken tower…

Use costume first. If you can. Costume gets cursed, should still be able to use classic hero.

Or rather, switch to costume after being cursed once. Get both sides to 1/2 before switching back.

Maybe just call it a day on the NT event and sort everything out before dragging this along and frustrating players?