So, another ascension conundrum. I’ve got both of these at 3/70, and just got my 6th tabard. Who to choose? Panther is so useful, but I have no heavy dark hitters.

And I’ve also got a maxed JF to deal with Killhare’s defense down issue.

Personally I would do Panther. She also dispells and her elemental def down is just too important (also for titans). You can use Pather with Hannah and not to mention that Panther is fast, while Killhare is average.

I would choose Panther just for her usefulness against titans.

Panther is a hero that will never get old. She’ll also pair well with your Hannah.

Killhare is ok, but personally, I don’t use her all that much very often. With a developing roster like yours, I would ascend her after Panther, as she is beast when paired with both types of def downs that you will have at that point. I’d ascend her before Panther only if you needed a hero for defense; but it seems to me you are using Hannah for that purpose.

Panther is better, however, Killhare if better on defense if that’s a factor/consideration. In which case Sergei could fill in for the EDD.

You have a good dark tank in Freya, so Killhare is not really needed on defense. Panther with elemental def down and dispell is a real asset in offense and against yellow titans.
And panther has fast mana generation.

have sergei… I really like sergei… just off the top of my head… if you have sergei, panther would pair amazingly with him. If you throw in a costume tiburtus… you will have in 9 tiles, defense down, elemental defense down, and a great finisher in the bunny.

Well…it seems that Panther is the popular choice of the people here and in this instance I agree. Killhare is great, I use her regularly but for all around usefulness, Panther.

Thanks for your input, everyone. 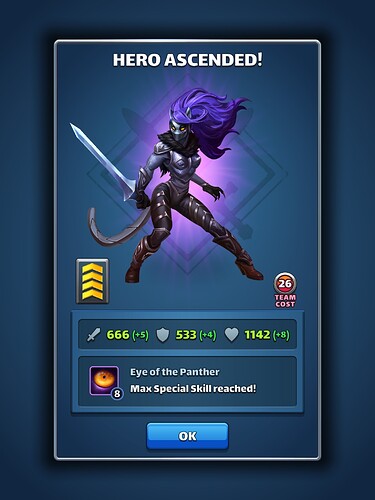 Good choice. I’d level 3 panthers before I even consider killhare. As a matter of fact, my killhare is still 370 for over a year.

The reason is simple, with the amount of tiles to power up killhare, you would’ve won with any other hero. But without the dispell effect of Panther, no matter how many tiles you have, you still lose due to taunt.

Also, Panther is one of the rare heroes that is rarely going to be outdated (how many purple def down and dispeller came out?). Damage dealers will always be the first to be replaced with power-creep.

while wearing the socks and underwear you were recently gifted.

That are flipped inside out because they were worn yesterday. Panther gets that kind of gameplay