I got him from today’s deal, and i feel that his EDD only hitting one, is a but lackluster. I’ll stick with C-Marj for now.

Congrats on the pull, spoilt with choices lol. Wish I had either C. Marj or Khufu, I’m stuck using G. Falcon as my best DD fire hero.

Agree. I think people have lofty expectations for every hero that comes out. He’s a good hero. Not the best in the game but very good and useful.

Please when you tell for one herothat it’s good and useful explain where and how this hero it’s useful? I have explained why he it’s not useful in a lot of the game.

You’ve also had it explained in places he is good.

But we totally get it already, you don’t like him.

He’s a good hero as said, not the best but not nearly the worst either.

@PlayForFun Hello brother.
can you make a Hero balance discussion for Khufu? Thanks in advance.

Here is it for you:

He is not b ad, but as a slow…niche hero. Cant compete with the Ruby, Elizabeth, CMarj’s of the game. Probably not even Santa or CSanta. Average speed and he would get some play or mats, now…probably not.

Which path for him? I’ll go attack, but atk/def or atk/hp?

atk def, never been bothered for hp on any heroes, except healers

If you run this hero with Wilbur, another good red damage dealer, and a minion hero and you manage to get the 11 or 12 tiles early on enough before you make a hole in the defense, and have the minions to help increase the EDD, this guy can help you deal massive (I mean over-the-top-more-than-you-can-possibly-need) MASSIVE damage against a defense. It probably doesn’t even have to be against green heroes.

The OP is now updated with the June balance updates.

He hits too hard now. His attack combined with his passive being buffed causes 850+ to each hero. Tone him down to at least 385% damage. 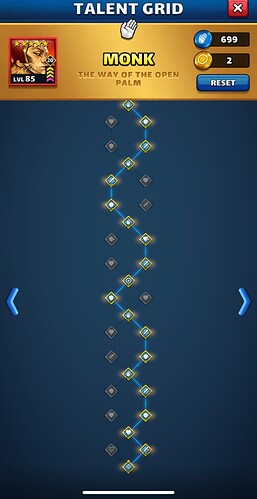 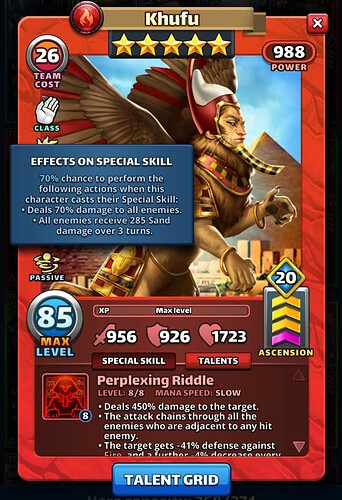 Tried him out with Bk-C and Roc-C… He did 1100-1200 damage per enemy… And then he threw the passive with another 150-200 damage… It was a nice and quick fight.
Like said, he hits insanely hard, but if the tank is killed, he only hits two, which makes him not as good as it first seems. I would rsther though have wanted him at maybe 380-400 with EDD to all that are hit, i mean, Panther-C, fast, hits all for almost 300, EDD to all and block buffs…

To those that have both sir roostley and khufu, on average how many more enemies does sir roostley hit with his special compared to khufu in standard raids?

Or if you just have sir roostley, how many enemies does he typically hit with his special?

Rooster never fires on more than two, which is why I gave up on him for offense. He’s really a “Hit-2” in disguise because the tank is already knocked out. Every. Single. Time.

He is on my tower defense team currently.

After my test of this hero after his buff Khufu become a slow sniper nothing more, I don’t like fast snipers even more this one

You are very wrong. He’s ridiculous now. Just needs the right set up. 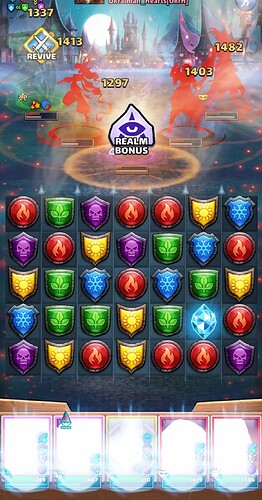 Before the Buff I only used him on titans, now I use him all the time in raids just because its fun to see him wipe out the whole team.

He is slow but if he goes off its pretty much game over, like Goseck.

Showing pictures of khufu dealing a lot of damage to the whole team shows khufu’s potential.

What it does not show is how frequently khufu is able to achieve this.

Showing his potential is not very convincing evidence for how useful khufu actually is. It’s like watching a video of someone making a half court basketball shot and assuming he must be good at basketball, heck maybe he’s just like steph curry.

Rooster never fires on more than two, which why I gave up on him for offense. His an”Hit-2” because the tank is already knocked out.

This is my concern, sir roostley is already faster mana speed than khufu so if he never hits more than 2, khufu might hit only 1 or 2 at best.

So they buffed his damage? Congratulations, khufu is a glorified “hard-hitting-slow-sniper” whom you can take pictures of hitting the whole team.