Your English is spot on. Second, I have him and he is in limbo at the moment because I recently pulled Narcisa and she appears to have more potential.

Thank you! I think I’ve been trying to use him more as a big hitter/ finisher hero rather than a support/ tool box hero. Using him primarily to break through stall teams and winning a long battle makes a lot of sense. That seems to be a good niche for him. I’ll try it out!

He becomes much more dangerous when combined with

I’ve used him with both Xnolphod and with healing blockers and in both situations he becomes deadly. His fiends essentially take out three because by the time they explode some damage has usually been done.

He isn’t good against teams with a lot of healers or some of the super minion teams (looking at the leaderboard with 3xW3K , plus C Freya plus another minion hero and the odds of his fiend exploding is very low.

I love him but it did take a bit of experimenting to find a way to use him better. He is amazing in rush WITH A HEALING BLOCKER.

If you didn’t get Tahir then had amazing luck getting those S5s. I’ve had 12 this month

Except for Minions there aren’t that many Healers who can find a spot in Top-Defenses. That alone makes him a good finisher on offense. Pair him with heroes who can slow down the enemy (moonfamily has Scoratek as well as Junaid). Mist+Scoratek also works nicely. Purple has some great ways to support him like Proteus/Hel or Malicna(also gives mana).

On defense i would play him as a tank flanked by fast supporters who can:

Is Khepri worth LBing? I’m deciding between he and Dio but Dio wouldnt be in my regular or war defenses

Khepri on this tower is just pure joy. Massive exploding death to bosses.

I had the same choice and went Khepri. No regrets. He is a rockstar.

Does anyone run doubles when raiding? I am tempted to max my first ever duplicate 5*.

He’s a … (sorry in advance) …blast on offense, the exploding fiends work very well, he hits hard enough that he often kills someone on the shot and leaves 1 or 2 with the fiend.

“Depends on who else you have”.
For me the answer is yes, I plan to. I missed one or two dark aether challenges so don’t yet have enough for him but as things stand he is #1 in the dark queue.

Most of you guys choose atk path (which is totally understandable since his purpose is dealing damage).

But I see quite a few Khepri tanks in war.
If his role is to be a tank, isn’t it better to chose def path so he might can do one more attack without dying?

If his role is to be a tank, isn’t it better to chose def path so he might can do one more attack without dying?

I have mine built full Def/HP for war tank, because I lack better tanks in purple and this one sure has the best stats out of all of them

If I ever get a better tank I might respec Khepri for attack, but until then he stays the way he is. The blast damage isn´t dependant on his attack stat anyway, so it´s only a partial downside.

Nah, you won’t make much difference going defense/health over attack. He’s really more of an attack hero anyways. Maximize what he’s good at.

I’ll see your defense/health build and raise you an attack/defense build! LOL 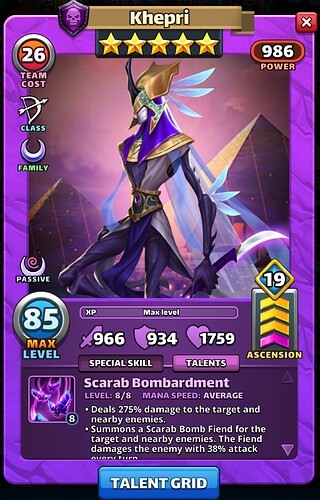 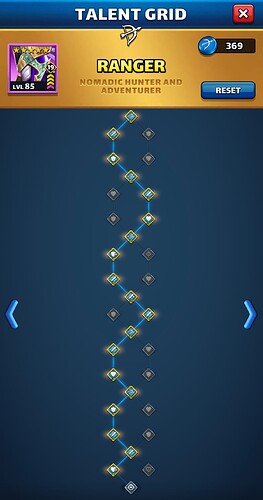