Just asking what your favorite color and why? Is it specifically about characters in the color or the team combinations or what?

I would have to say Green is the one I tend to travel to more for power when it comes to solid teams. I love Heimdall, Telluria, Lianna, and Mother’s north. Great power for healers and resurrecting fellow teammates!

For other interesting ideas or creative challenges please visit my YouTube channel ski-ski. 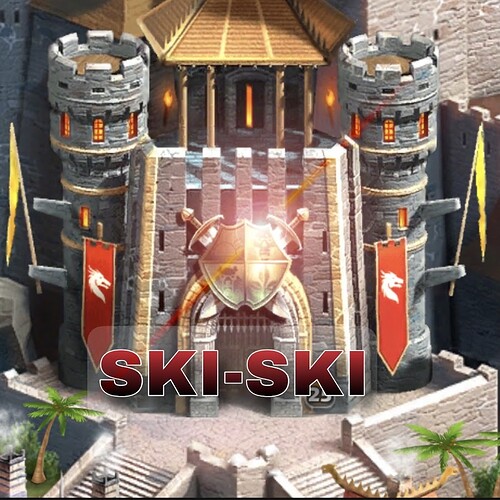 Purple for the different play style, its so fun seeing the chaos in the enemy team when they die scrambled (synergy completely destroyed), poisoned and kill each other, i use c. rigard, malicna, cheshire cat, fura (or stone cleaver), Alfrike;

or yellow, due to new comers and the team high damage - wu kong, guardian jackal, zuri, justice (soon to be devana) and bai yeong.

Purple! It’s been my strongest color most of the game, and I love finding synergies between skills.

I run mono most often right now and this is my favorite purple team. I can use them in just about any format and 9 tiles charges everyone, almost guaranteeing a victory. In order, I fire 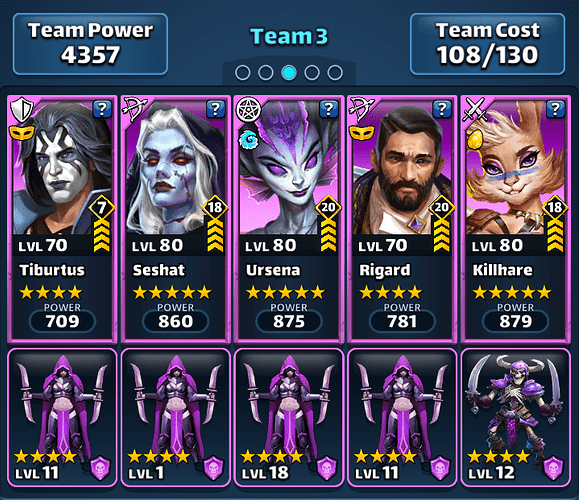 I love killhare!! She is a beast.

I am trying to find a five star healer to replace rigard. Otherwise great job and team!

Thank you! With emblems and the costume bonus c-Rigard is just like a 5*!

Best of luck in your healer hunt!

I agree. He so wants to be a five star and stretches really close. Good choice of healer.

it changes with the seasons, and also with the developments in my roster. sorry, it’s gonna be a long one haha.

for a while, it was my yellow team: Leonidas, Guardian Jackal, Joon, Drake Fong, Mist. super fast, can take out enemies quickly, and if i get another match or just a single tile in a lot of cases, Leonidas can follow up with whoever is left, or can buy me some time with his mana cut. 40% mana reduction!!

then it was my purple team: C. Rigard, Kageburado, Myztero, Ametrine, Tiburtus with CB. i put the two 11 mana troops on Rigard and Tiburtus (my only mana troops at the time), and everyone charges in three matches (Ametrine, sadly, would still only be at charge 1, however). i used to put the mana troops on Kage and Myztero for the 6-tile charge, but i got a lot more success putting the mana troops on the wings with that mana bonus from the costume, and everyone fires in 9 tiles. and i will never get tired of firing a bunch of status ailments back with Myztero!

then my fire team was ole reliable for a while: Boldtusk, Vanda, Marjana, Gravemaker, Mitsuko. no matter how much my roster changes, i will never get tired of watching ice heroes kill themselves on Mitsuko’s reflect, and i have also had the pleasure of seeing a charge 1 Cobalt kill himself despite his high bypass chance!

in the last 5* buff booster tournament we had, i fell in love with this blue team: C. Kiril, Sonya, Fenrir, Magni, Raffaele. Raffaele has bailed me out of so many jams. i had previously used C. Magni and base Kiril, but i discovered a few weeks ago that switching which costume i use turns out to be more effective. not only that, but during that tournament with so many Krampuses running amok, i discovered this team actually has a kind of “double dispel” effect on Taunt heroes: Sonya can knock out Krampus’s Taunt, and then C. Kiril can follow up to negate the attack boost. this team was kind of floundering for a while because Sapphire and Boril would take turns in Fenrir’s spot, and then i saw the light on Fenrir. kills are consistent now, and Fenrir charges quickly for follow-ups because of mana from kills.

now, i have two favorites: a green team with C. Melendor, Lianna, Elradir, Caedmon, and Almur; and a yellow team with Guardian Gazelle, C. Vivica (still at 3.70), Gullinbursti, Mist, and Norns. i raided to global 7 with the green team because putting the 11 mana troop on Elradir makes him charge in 3 matches plus one status ailment. that elemental link of free mana is so clutch for follow-ups. the yellow team is slow, yes, but getting Vivica and Gulli to fire almost always guarantees the whole team is overhealed, and the reduced damage from Gazelle’s Dance of Spirits buys me time to get yellow tiles to kill yellow heroes because Norns makes them weak to them!

i do have some other teams i use in war that i like and in other situations, but these are my all-time favorites.

I raid using 3-2. The 2 in that setup is always Ariel – Isarnia (we will see what happens when I have maxed Athena). Except for Red tanks, than the 3 is blue.

My favourite 3’s to go with them are red and purple. But that is highly dependent on the heroes I have available to me. Ariel is my absolute best healer. Isarnia is fantastic with her def down, as long as I can get her firing. In purple, firing C.Rigard – Domitia – C.Sartana is almost always a guaranteed kill. And yes, I do use two healers on attack for survivability of crap boards. 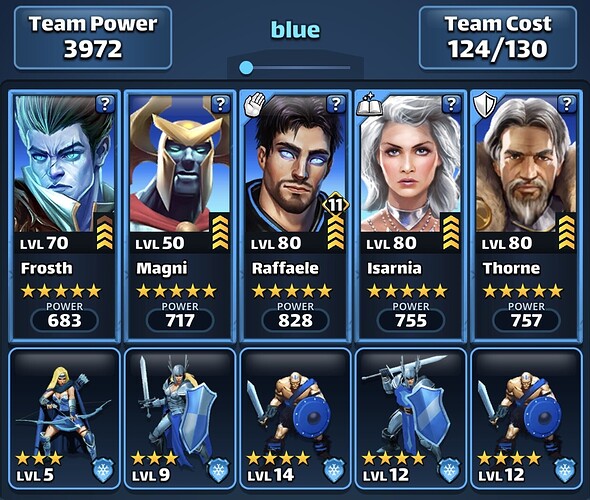 I have always loved my green team too. 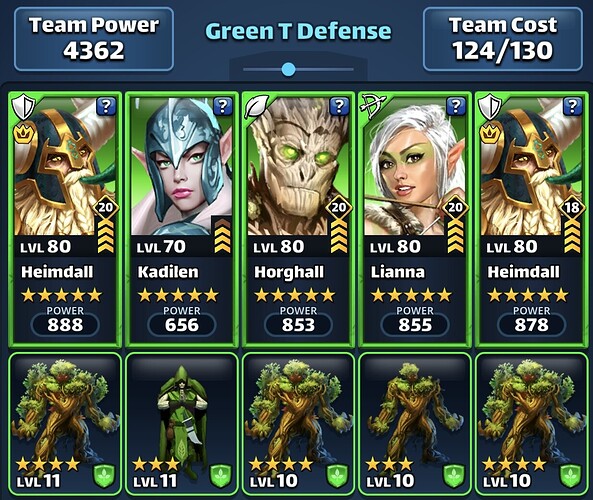 Wish I could get Kadilen up all the way though

If you’re talking mono teams (which I use for war), mine are:

Of those I enjoy using Purple and Red the most, although Malosi can be fun.

How is Horghall working for you?

I am a mono color guy too. Love them in wars!!

He is a real nice tank. Biggest life I have and attacks strong too. I wish I had someone to compliment him other than Lianna, who is awesome! I have two Telluria but not leveled up to the last level.

Red used to be my strongest team but has stalled. 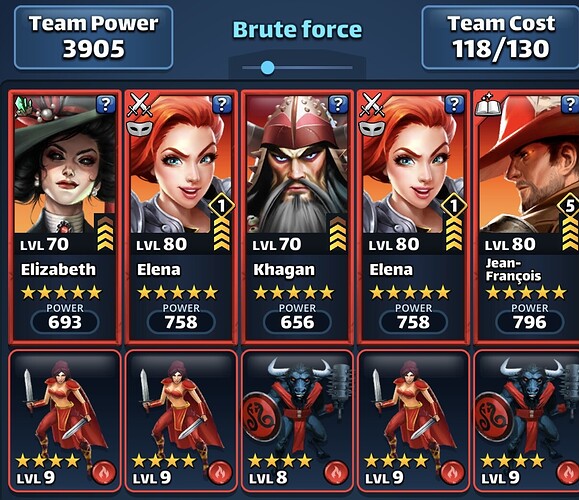 Love the double Elana, let them kill themselves.

I always found him a bit of an enigma. He has massive defensive stats but hits like a soggy paper bag. Maybe if I emblemed him for attack … (costume would help too

I like him and he is solid for me. He is with two Heimdalls who can double his life and add30% to attack. Works

Are used to have an all yellow team that I called my holy assassins which consisted of one Joon and four malaosis . They could kill quick!

Four Malosis!!! I was so lucky getting one.