(A separate thread for Defense Team performance tracking will be created as usual, however.)

Healing or resurrection have no effect!

The developers are continuing to work to refine and improve how matchmaking works, so we don’t know exactly what to expect yet, but they’ve set up a Raid Tournament Change Log, which you can monitor for updates.

What are you thinking about using for your Defense Team? 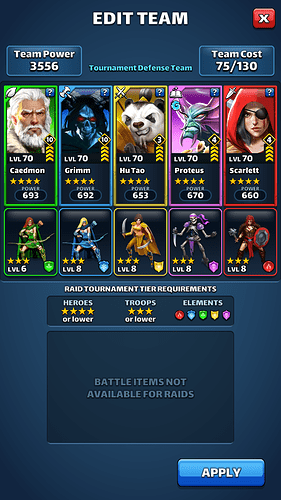 Which of your heroes will you be likely to use on your Attack Teams?

I honestly don’t know, I can’t even use 3-2 combination without at least a healer…

Are there elements of this week’s Tournament that are unclear to you?

@Petri the matchmaking system use 5 best heroes, what happen if the best heroes are healers? Are they still included in those best 5 even though the special rule is Bloody Battle?

I don’t even have a choice…

I honestly don’t know, I can’t even use 3-2 combination without at least a healer…

Last time I used Rigard sometimes for clearing, and Boldtusk/Kiril sometimes for the buffs. They can potentially fit into a stack, even without healing be needed. Likewise, Melendor can be useful for dispelling and high attack stat in a stack.

Are they still included in those best 5 even though the special rule is Bloody Battle?

I think so, because healers aren’t disqualified, they just have no effect.

This was my default defense set initially, which I presume is what my top 5 was judged on for this Tournament:

Good point, I have Kiril maxed to make it 3-2 combination with only 1 healer.

This was my default defense set initially, which I presume is what my top 5 was judged on for this Tournament:

Many defense options, but leaning between those 2 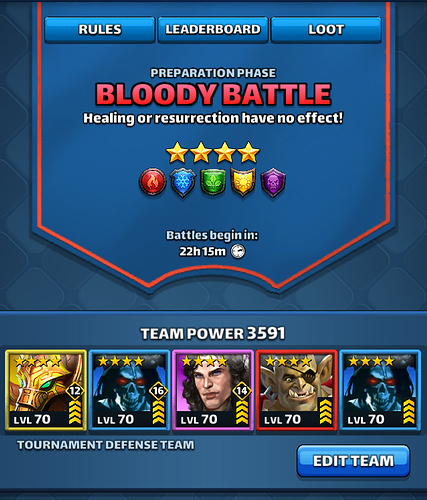 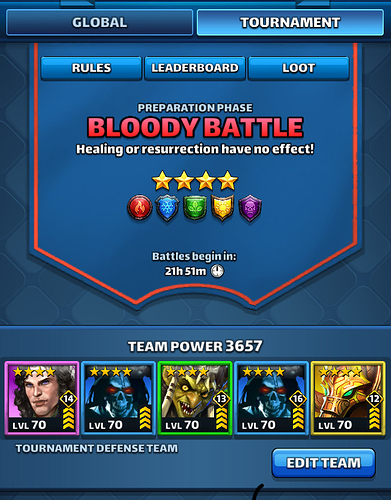 Gonna attack depending entirely on the ennemy I face, but probably won’t go mono on a no healing battle, and probably will use Wilbur quite often to slow up the damage taken. Won’t bring any healer and will focus on fastest damage possible (bring all the ramming pulverisers!!!)

Thinking Wukong might have something to bring, offense or defense 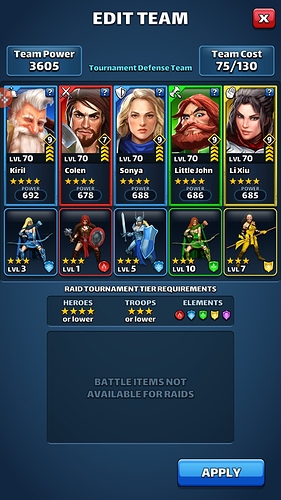 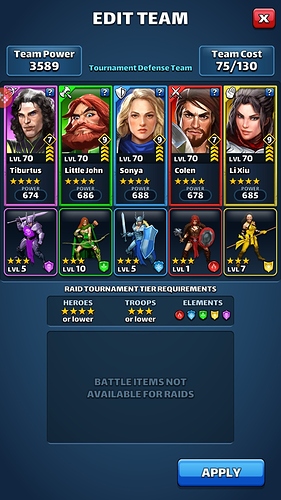 For Tiburtus (purple) and Colen (red)…

You are not using Li Xiu tank?

Kiril will not heal.

So your answer is “No”? I know that healing is off…but I like to have his other buffs.

You are not using Li Xiu tank?

In my usual def team I have Li Xiu as tank. Tested with Sonya as tank…both are equally good in terms of cups (2150~2180). I get the better color distribution of my team with Sonya in the middle.

I usually take down Sonya tank without using any green heroes. Don’t forget to post your defense result, I’m curious how Sonya tank will fare in Bloody Battle tournament.

Last time I run with this defense team. And was pretty good on defense. I managed to stay in leval A defense. And top 1% overall 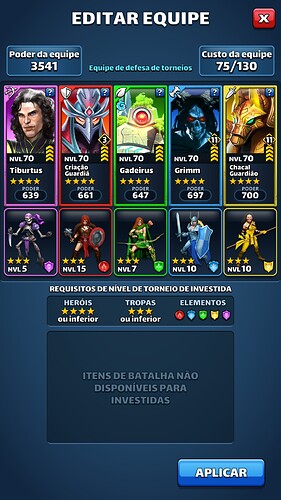 Last time I run with this defense team

I think there was no 4* “Bloody battle” so far.

bit waste to use Gaderius , no damage , slow and heal wont work either

i think better put Li in middle as tank , Li will punish more if opponent got bad board , Sonya is fast but only hit 1 hero and with low damage

There are some differences in amount of emblems per hero but this is relatively minor.

Edit: Another variant for consideration is this:
Wilbur - Tiburtus - Li - Captain of Diamonds - Caedmon.

Grimm is just a blue Tiburtus, so debuffs can overwrite each other, they are both average speed.
Captain is fast but its usefulness depends on whether we expect Buddy to be broadly used in attacking teams. I personally think ppl will use Buddy due to minion shield xD

I think this is what I have to work with. Not sure who to use as tank (normally kashrek) was wanting to do Li, but she isn’t fully leveled yet 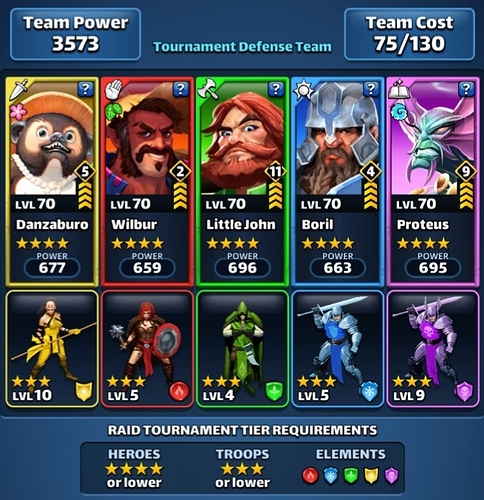 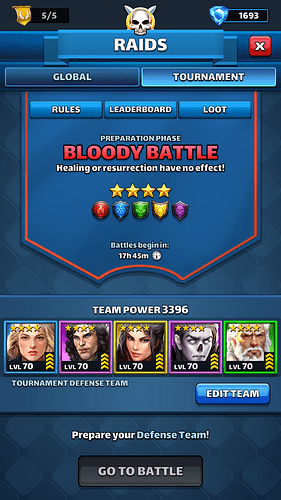 Could sub in grimm+17 (squishy, hits hard, not fast, same debuff as tibs) for sonya and/or proteus (no emblems, squishy for flank) for tibs or cyp. Any advice?