Some pics of what it is currently on beta would be great, even if it’s going to be nerfed, it helps non beta players to get an idea. Thanks. 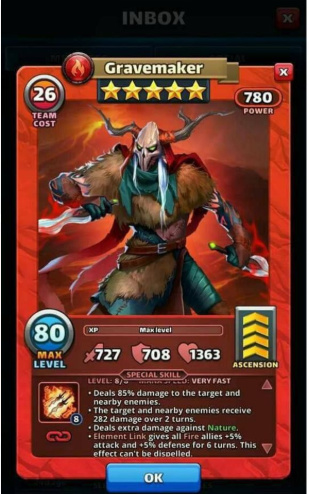 I have already started saving everything I can to pull him. Love his abilities and look

remember DOT isn’t affected by defense and defense buffs or other reductions but is affected by your troops.

and with a level 11 mana troop only takes 6 tiles (or one ghosted match 3) to charge him up.

also, it’s good to know what happened to General Grevious after obi wan beat him down.

Most recent edition. People found his special underwhelming so they gave it a little boost. I’m looking forward to having him… I just need a Mana 4* troop now. 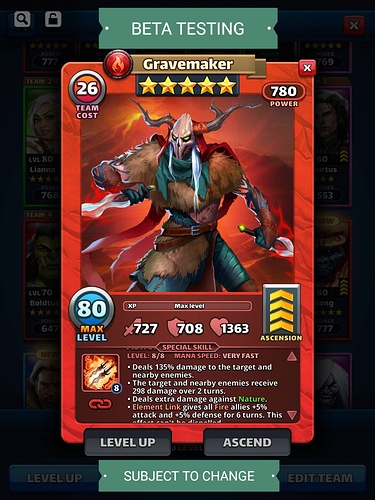 Did you add the “beta testing subject to change” banners or is it in the beta version now? Either way nice touch!

Added it, decided that should help distinguish what’s testing or what’s been released.

SG really should have that watermarked in their beta testing heroes.

If it remains as is, I’ll definitely attempt to draw his card. I have the blades and ring ready

Wouldn’t he be more appropriate for Dark than Fire? His fur looks combustible.

Dammit. My red roster already jammed. After mt umber, I am one blade short of being able to ascend one hero (azlar or nat).

Now I have to wait until June.

Now that i think about it, we are sure he is a male?

After Skittle i’m not sure of anything anymore

Elpis, if you stop dating the heroes this will not happen again.

Now that i think about it, we are sure he is a male?

After Skittle i’m not sure of anything anymore

Lol. When I first saw that Skittles was a “Bog Witch” it kind of blew my mind too… but from the onset I’ve been under the impression that Gravemaker was a female. I don’t really have anything to base that on other than the fact that she looks rather developed in certain areas.

I hope to they buff his ability because it doesn’t seem very beneficial. Great tile damage though and I guess being super fast helps.

That said, Marj is sitting at level 1 on the main still, and Grave if obtained would be built on either account for raid attack and 4th red on titans. As of right now all my reds are benched on my standard raid teams… unless against an Alby tank; that would likely change up if Grave is in the mix, that special is sick damage with a level 11 mana troop when it comes to a damage / tile metric.