NOTE: As of this Raid Tournament, there will be 5 Battle Days instead of 4.

A frequent question about this is whether the number of Defeats allowed will be increased — and it doesn’t appear so based on the updated in-game explanation: 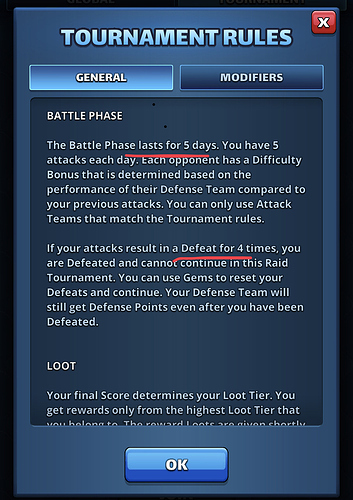 For other threads in the Seventh Raid Tournament series, please see:

Before and During the Tournament: Share & Discuss Your Teams, Thoughts, and Questions!

The developers are continuing to work to refine and improve how matchmaking works, so we don’t know exactly what to expect yet, but they’ve set up a Raid Tournament Change Log, which you can monitor for updates.

As of the Third Raid Tournament, initial matchmaking was based on your Top 5 strongest heroes that qualified for the Tournament’s rarity and elemental restrictions:

Morning all, I double checked this from our developers and seems like there was incorrect information in the change log, it has been now corrected. Since previous Raid Tournament, this is valid:
“The difficulty of enemies that the players face at the beginning of the Tournament is now determined by the 5 best heroes in their roster.”

To clarify, the best 5 heroes within the rarity and element limits of the current tournament.

The special skills of the heroes are not taking into account, so for example in this tournament healers are indeed included for the matchmaking.

This was slightly amended as of the Fourth Raid Tournament:

As of the Sixth Raid Tournament, matchmaking for Defense teams was changed again:

NOTE: It appears the loot for the Seventh Raid Tournament has been very slightly tweaked. For discussion about this, please see this thread: The New, NEW Raid Tournament Loot

The loot does appear slightly updated, but it’s much more similar to the “Reduced in the Meantime” loot than the original loot.

Changes are marked as New

Acronyms in this table:

Here’s the current breakdown for ascension mats, tokens, and Emblems (for simplicity, I didn’t include the Flasks, Atlantis Coins, Battle Items, and Crafting Materials that are in loot in addition to these):

This doesn’t seem like a notable return toward the original loot.

My expectation (hope) is that further updates will come that return the loot far closer to the original — as you can see above, this slightly tweaked version is nowhere close to the original.

Thank you for taking the time to make this very helpful guide.

I agree with you completely - the loot is a shade better than last week with the top 1% changing by giving 2 additional summon tokens and 2 additional crafting mats. Personally my biggest concern is that raid tournaments were stated to be the best source of emblems meaning we would receive more than the 72 per week from trials. The whole situation makes me sad but I will continue to be hopeful that SG does right by their players.

The addition of a 5th day, while still maintaining 4 “loss slots,” means there’s a much higher chance you’ll be throwing more continuation gems at the tournament. It doesn’t correspond with the marginally increased loot. This is basically turning into another money grab.

Start and see what will happen. Nobody will force you to buy a continue and everybody will get some loot for free. Maybe you’ll be lucky and make it through all 5 days… 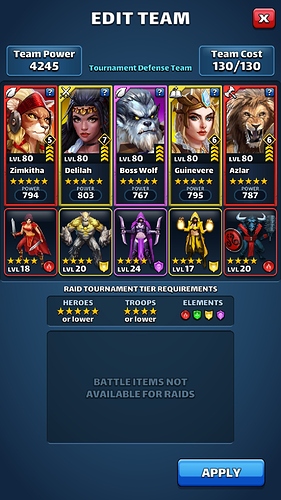 Perhaps not red mono… seems like a good chance to pair boss wolf with guin, and have boss wolf as first intended before they nerfed the hell out of him.

Yes, but red will be the only color, where nobody can stack strong against.

If you’ll put mono red on def, you’re going to force mono attack and a bad board would be very harmful.

By mono red you’ll make green almost useless and limit the attackers to red, yellow and purple to stay at least neutral against your def as well.

Will definitely go with Santa as tank. Hard not to let him go with special, flanked by Kunchen

Are mana impacting attacks going to affect the Rush Attack mechanics as normal? I. E. Little John, Liu, Hel, Peters, Merlin, Chan, etc., can we expect they will be capable of slowing down special attacks rate caused by Rush Attack?

Yes, last time they worked like charm and will be the key to success here, since very fast Azlars are the deadliest threat, if they fire all 3 turns.

Especially a very fast Little John will also be devastating.

We suspected this event was gonna come one day in Raid Tournament.

I think I’m gonna level up a John or Skittle for such event in future!

Sooo many heroes can shine here✨ ( except blue this time ) but useless Hao Tao , Colen, brittle Skittle can be invaluable…
… Not to mention Justice and Horgy …guardian owl??? Boss wolf and all the pretty much meh slow heroes will shine … The Gods have favoured the slow …

No complaints, nothing to say?
I just wondered about minor activity in this thread…

What do you think better. Low level red or high already fast … 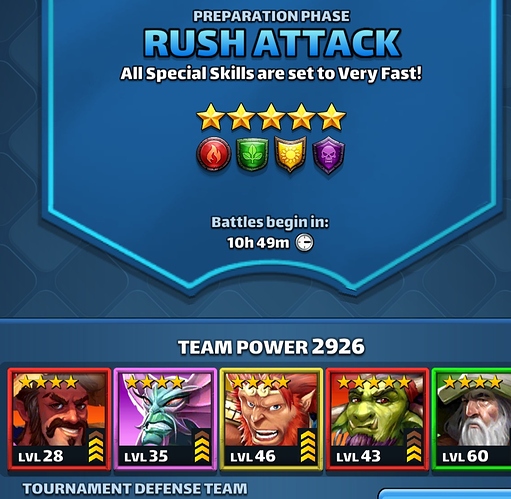 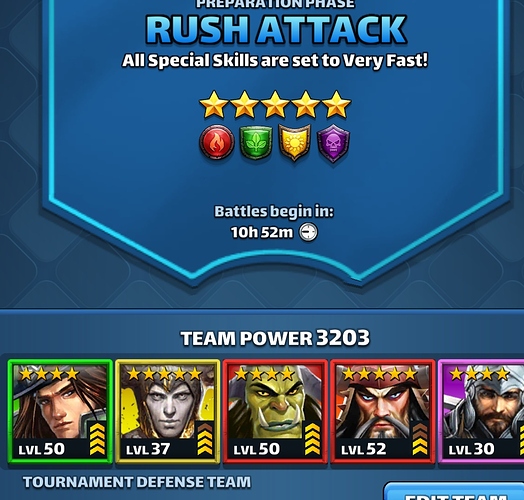 Maybe wu kong can shine with his fast. Wilbur maybe can compansate his low level with being fast and what a fast healer can create?

Mother North will be brutal in this one. Wish I had her. Best I can do is Kunchen, who should be pretty good this time.

All red this time…

I went 4 blue in the tourneu where green was omitted. It did not work out for me. I’m just going with what i think are my best heroes for the rules. Came up with justice, kunchen, azlar, vivica, marjana

I’m thinking this would be a good chance for my Beefy Gormek +9 to head back to tank. (He’s been flanking my Danza +9 for a while now.) With no blue stacks, it could take forever to take out this meat shield, and constantly firing 6-turn, -def specials can’t be a bad thing.

Yes, last time they worked like charm and will be the key to success here

Thinking I’ll try to counter this with Poseidon. I don’t have a lot of advantages in this tournament. Not many slow AOEs on my roster (4 or 5 star), and even fewer leveled. Poseidon can counter folks relying on the mana slowers/cutters.

Sooo many heroes can shine here✨ ( except blue this time ) but useless Hao Tao , Colen, brittle Skittle can be invaluable

No Colen, Hu Tao is unleveled, as is LJ, but I’m probably bringing my 4^70 Skittles to the party.

Thinking my crew may be: