As my understanding, after a target dodge a hit,
the chain should stop. Here is what happens:

See the picture below: 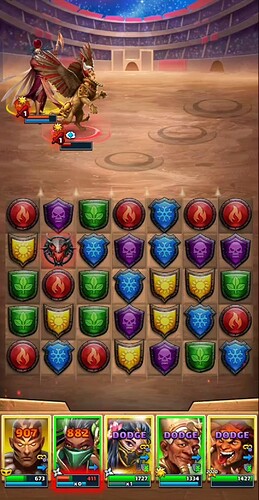 Is it a bug or is it working as intended? If so, please explain.

2 Likes
Margaret are not breaking Khufus chained attack
(Again) Khufu's chain attack does not break even if successfully dodged
ALI_G August 30, 2022, 11:57am #2

Is a bug connected to Jade would assume. With Bastet when there is dodge on first hit it stops

Thank you for your response, I hope it will get staff’s attention

Once a hit is being dodged or it misses, it will stop chaining. Same if khufu is blinded, or also when hitting a ghosted target, that will stop the chain

That what I thought too, but have tested a lot with Jade and the dodge never stop the chain, even once.

I think it’s just a visual feedback issue. When khufu hits, it registers first as hitting all five targets. But since ptolemy dodged the attack, malosi also receives feedback that the damage is dodged. So it announces that it has dodged as well

Not really, Khufu target Topaz first obviously, then it spread to Jade+Ptolemy, then Joon+Malosi last. Topaz dodged the hit tho.

Is this due to malosi? Because I notice khufu had his buff blocker. All I can think of it maybe the buff blocker also negated the adjacent effect?

That’s a huge stretch of a theory, but it’s the most logical reason I can think of

I had another set of pictures as well, where Khufu target position 4. Then it dodge and still chain to others, final results position 2 take the damage (4/5 dodge) 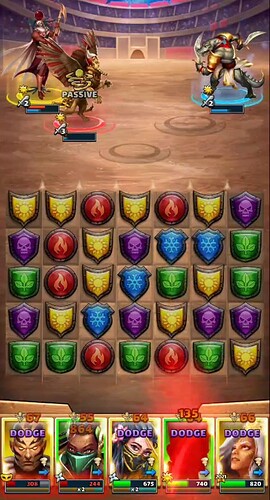 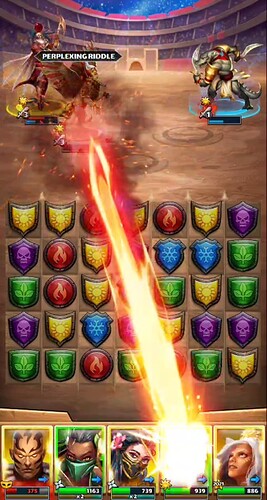 If Malosi block, it will show “block” and only block the sand damage, nothing to do with the chain I believe. The above case doesn’t have Malosi special involved.

Could you be mixing the passive damage/dot with the chain effect? Because it is a seperate application.

If you could record and share a video, it would be more helpfull to analyze and determine what is going on.

You can check the damage from two pictures, that was around 800-900 damage if they got hit. Obviously not from the passive.

From what I see on top picture Jade herself has failed to dodge and got the full damage, while other allies have only suffered from the passive/dot. So I see nothing wrong.

Khufu target Ptolemy first, and he dodge. How it still keep chaining to Jade?

Thank you for your response, I hope it will get staff’s attention

I have asked Staff to look at it, because as I recall Dodge should stop the chaining…

Thank you very much PlayForFun!

ah ok, the order of images got me confused…

Then, apparently dodge dice is rolled “after” chain hits the target… Just voiceful thinking here… I will try to test this from Khufu pov and share if I figure out anything.

Yeah I don’t know why everytime I posted the pictures with wrong order lol. Sorry to make you confused.