Has there been a change to the way Jackal’s elemental down bonus damage is calculated vs yellow?

I just had a situation where I had yellow defence down applied to Drake at around 1/3 hp and running a strong mono yellow team (see image) I fired two yellow tiles into Drake, and he lost only about 1/2 his remaining hp; or 1/6th his total.

I have experienced similar situations a few times in the last couple weeks.

Am I misremembering Jackals ability vs Yellow or has the ‘weak’ effect been turned on even when the elemental defence down is in effect? 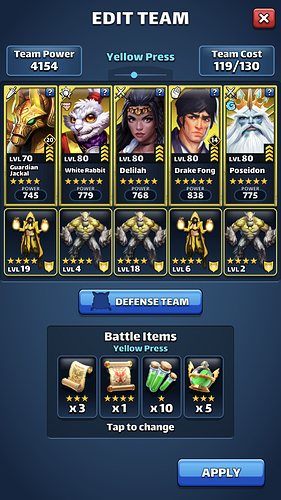 The weak element effect is always on no matter what defense down you apply (elemental or normal). I use Jackal quite a lot, so whenever I hit a holy hero with his defense debuff, the yellow tiles still do half the damage as compared to what they would do on a neutral hero with the same holy defense debuff. Holy defense debuff on a purple hero will take the highest damage from yellow tiles. Only exception is the hero special. So if you do Jackal + Joon on any colour hero it does not matter, Joon will always do a high amount of damage.

Are you sure Drake didn’t resist, due to his class ability?

I know you are good with these calculations

So, I understood what you said and it is logical for yellow tiles to do half damage to yellow hero. But that half damage isn’t actually multiplied with 5, in mono situation? And this without the elemental debuff…

The holy defense down will ofcourse negate this effect, so it should still do a lot of damage. So I am suspecting, as you said that Drake might have resisted that defense down.

I’m quite confident that a month or more ago, the two yellow tiles would have taken out drake.

Hmm, maybe you are right. But I am confident about the damage mechanics. For example, let us assume that if we put a holy debuff on a dark hero and one yellow tile does 1000 damage to that hero, then under same holy debuff condition the same yellow tile would do 250 damage to a holy hero (assuming that both hero has similar defense stats).

The two tiles would kill a Zim in the same situation.

Anyway, I’m paying more attention now, going forward I may be able to record some situations and better understand what I’m experiencing

Yes, killing Zim would be possible because yellow tile is neutral to red, so with a holy debuff it will do double the damage that it would do against a holy debuffed Drake. But, yes, it is best to record and see the numbers for yourself.

I just had a situation where I had yellow defence down applied to Drake at around 1/3 hp and running a strong mono yellow team (see image) I fired two yellow tiles into Drake, and he lost only about 1/2 his remaining hp; or 1/6th his total.

While rare, 5* mono teams, when attacking a hero strong against their color, may do 15% to 20% their normal damage.

While the exact damage calculation is not known

We suspect there is a soft cap on the attack stat. 5* Mono teams are most likely to run into the soft cap.

It is unlikely, but possible there is no limit to minimum damage.

Doesn’t happen w Evelyn and 3x Lianna vs Blue or Panther vs purple so I’m not sure this is the answer. Even White Rabbit seems fine vs Yellow - it’s just Jackal.

I’ve run Mono for over a year and am very familiar with how this used to be. And how it is with all other elemental defence down…

I’m following this because I noticed a similar thing against Musashi (no he didn’t dodge).
I like @ThePirateKing’s explanation but feel like there’s still a difference. Although I’ve not been playing near as long as @Halifax, I do run mono quite often.

It is unlikely, but possible there is no limit to minimum damage.

If this was the answer I’d have discovered it in another colour as well. I haven’t.