So iv got c.snow white and finley at 3/70 ill have the final scope from pov … So who gets them …
No hero will be on defence doubt they end on titan either … Maybe MT…
Mainly war depth … I can build a team around c.snow white … Be ariel wilbur JF and another healer or attack undecided … Finley could go on some team as well …
Emblems … 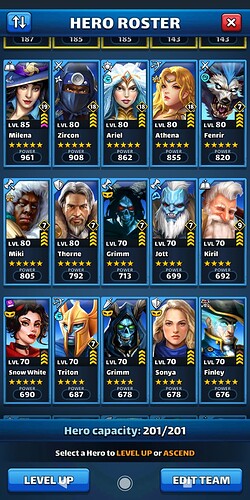 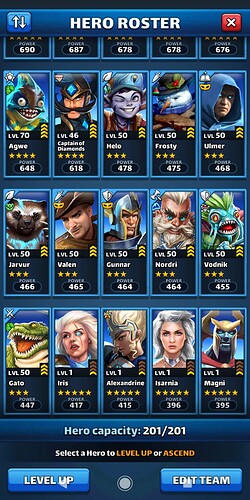 I don’t love snow White… But man… The new heroes coming out are loaded with buffs and ailments… Double taunts… It is becoming a real gauntlet just to fill a raid chest. I’d lean her… Finley had always been a good hero … But with the likes of morel/frigg/insert season 5 hero that everyone chases… He is becoming aged.

I voted Finley because of emblems and I think one cannot really make that much of a mistake choosing him….And because it’s a bit more difficult to build a beneficial team around SW.

SW on the other hand can be a little bit more fun, given this fun was prepared.

SW heavily synergises with any hero that has a life link special like Wilbur. Would that be possible?
Also Xnolphod or Ludwig are coming in handy to overcome that slow speed.

Also scroll up as i have a team for snow white .

Hmmm it is a tough choice. Snow white is quite a niche hero, and finley is an easy hero to use on any roster.

But I’m leaning more towards C.SnowWhite, mainly because you have her costume and her stats are slightly boosted. She could be deadly in BuffBoosters/VF tourneys/wars. I have faced snow white in raid defense and she can be a real pain. So let alone that you don’t plan to use her on defense and have full control of her on offense, she could be real fun to play with! I just think it feels real powerful to strip opponents bare of their buffs and dealing insane damage on them

Finley seems a bit dated to me and a bit weak (stats wise) as compared to C.SnowWhite.

And since you already have quite a few ascended blue heroes, would be nice to have a niche hero that you can strategically pair with (and usually proves to be much more deadly if paired nicely as compared to a straightforward hero that fits anywhere).

p/s: oh and looking forward to your spring giveaway

The times I have faced Snow White has left me “Wait…What just happened!?” It was not easy at all to plan around her when attacking.

Finley has more usage outside the specific tournaments, but your collection already looks so, wow

For fun and something different - I´d lean towards Snow White

Finley IMO is outdated. It’s a shame you don’t have Morel as I think he is superior.

So, much like people above me have said, I think while SW is niche it would be of greater use. Specially on the tournaments.
Nice ice heroes btw