Make an item that allows you to permanently increase the stats of a hero. Cap ATK/def at 1250 and health at 2500 or something similar. This way we can pick which older heroes to power up.

I wish the game would sell a book or scrolls that increase a hero stats with money.

For example increasing 10 attack points for $1 with no limit how much points we can add as long as we have spending power.

Removing caps on roster development would have to compete, financially with the golden ticket: new portal creeps

So anyone endless upping Ferrant’s defense would no longer have any need to pull for the game’s most lucrative and smallest niche: the tank position
Unless… they’re still spending a comparable amount of money! aka…
Not…

ahhaha! Forget about it.
Now… if they make the stat 1 point for $100.
Then maybe, it would make cents

But since Limit Breaker already exists…
Then…

No read what I wrote

It would complement. New heroes have better effects and easier to max this way with higher starting stats. But if you put more money in you can max older heroes too. I’d max JF to use with narcisa and matilda

I don´t see the difference to LB…

If you want to increase the stats even more than LB just ask for a second round of LBs? would be technically much easier to implement.

But this whole increasing stats is pointless as long as it can be applied to all heroes, you end up where you started except you (and everybody else) spent a ton of money to take the full circle… Now everybody has higher stats and you lose just as much as before.
And SG will never limit new heroes, those are the ones that make most money. They will never make it possible for you to take your old hero and be able to compete with the newest OP monsters. If they did, they would charge you the same amount of money a new hero costs.

You don’t need to ask for another round of limit breakers. They’ll be here before you know it. Level 100 heroes, here we come!!!

The point is every hero can be increased up to a max stat 1250 ATK/def, 2500 hp for 5s. The higher the base stats the less items you need to feed to get there. But this gives the people the option to increase any hero to those stats with enough resources 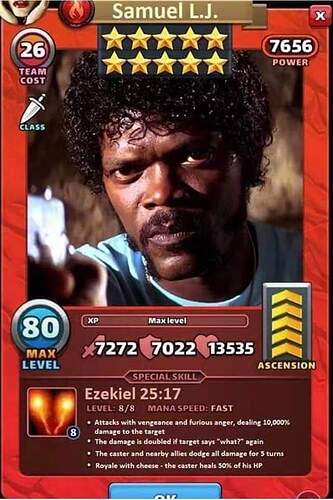 SG will not allow you to get a garbage hero to be able to compete with current heroes. Very bad for business.

I tip my cap to you!