Emblems are ruining the game. There’s no chance you look at this picture and think “you will lose this one” defense debuff, elemental debuff, 2 diamonds in my color, and yeah this was a loss. It was the attack debuff from Kingston that prevented the green diamond from killing ursena and Guin but it was due to emblems that this can even happen. This just shouldn’t be a loss. It shouldn’t happen. Totally ridiculous. 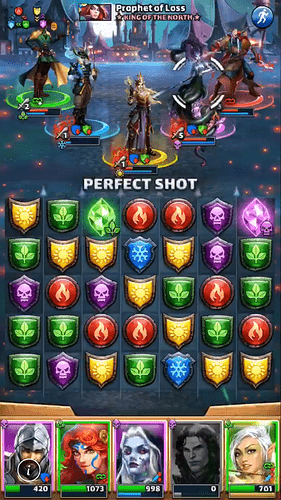 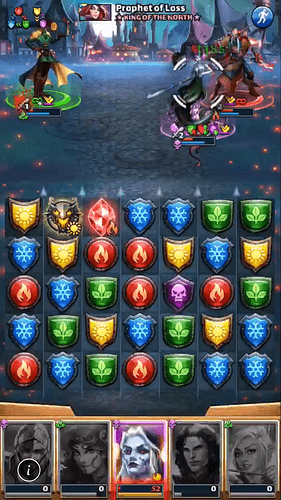 You popped the green or the purple?

I mean that’s the first thing I thought when I saw your team and who you were facing.

That is a brutal loss, but I disagree with your assertion that losing in this situation means that emblems are ruining the game. In fact, I would say that it would imply the opposite considering it gave a defense team that otherwise could have lost in that situation the ability to survive & win. I’m curious, what do you think you could do differently in a rematch? Your team set up was solid, but even without emblems you’re hoping that your team with two 4*'s was going to beat out a full team of (I’m assuming maxed) 5*'s, many of which were HOTM. It wasn’t going to be easy to begin with

I hit the front 3 with eve, target ursena with Lianna, pop the green diamond and it only kills Finley. The entire defense unloads on me, a couple heroes survive and I pop the purple diamond and still can’t win.

Ok yes I brought two 4* heroes. Tiburtus for the defense down, he has a mana break from his costume and charges in 9 tiles same with Rigard+19 he charges in 9 tiles. Rigard is basically a 5*, look at these stats. The point is look at that position and tell me it should EVER be a loss. 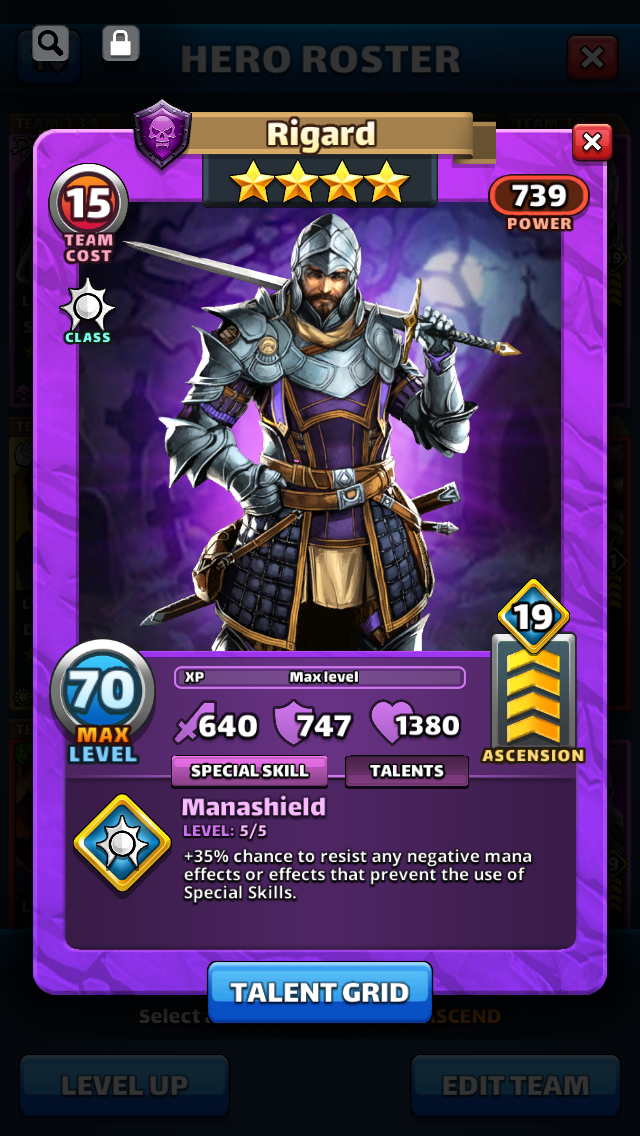 That was what i would do too, probably switching the yellow tile with the green one to have more cascade.

Depending on your strengh (troops/emblems) i would rather target Kingston and gave up on Ursena for the perfect shot of Lianna.

If that 3 tiles didn’t kill Guinevre even with the double defence down, you probably had a great difference in strenght.

That’s a 4500tp team… that’s a tough opponent no matter who you take, let alone with 2 (I’m assuming) emblemed 4s.

I’ve lost to a sub 3900tp opponent taking a 4200tp team… sometimes you win. Sometimes you lose. Part of what makes the game interesting, challenging and fun.

I’m sure if you had won, Prophet would be shaking his fists at the game too. “How could I lose with this D??”

So… It’s ok for you to use emblems on Rigard to make him “basically a 5*” but the opponent should not be able to elevate his 5* heros?

If you take emblems away completely, the situation is not much different. So… Emblems are not the issue here at all. His team being better than yours – even in just about the most favorable situation possible for your team – is the issue.

I agree that your Rigard’s stats are indeed impressive. Do you see the irony though of stating on the one hand that emblems are ruining the game and on the other using the example of your stacked emblemed 4* to flex? Like I said, your team set was solid. I’m sure Rigard was useful against GM and stacking at least 3 dark heroes against a Guin is usually a great idea, but even so, against a team like that a win is never a guarantee. As impressive as the stats of your team are, theirs were likely better

I don’t blame prophet for embleming his heroes. I’m salty that emblems exist at all. Do YOU want to use 6 war flags against teams that very quickly will be 4800tp? You gonna build 6 teams that can do that?

Yes his team is of course better but as the attacker I put myself in a great spot to win. The point is when you look at that picture, that’s obviously a victory. Regardless that his team is very strong and I brought 4* heroes. That shouldn’t be a loss.

to be losing this raid.

As impressive as the stats of your team are, theirs were likely better

Prophet of Loss is not just likely better… He’s much, much better! 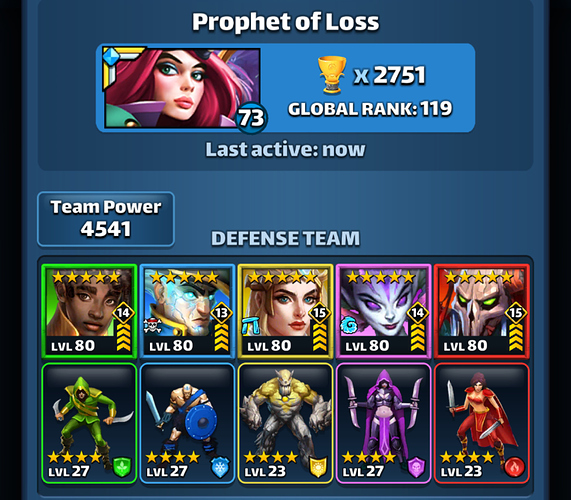 Here’s my 3907TP against a 4611 TP beast.
I didn’t think I had a chance.
I feel your frustration but even highly emblemed five star teams
can walk the plank.
For me in this situation I think the only way to have a chance is to run mono.
I have some other excellent five stars not shown but against this massive of an opponent this I felt was my only choice.

So what I think is that these heavily emblemed teams force mono attacks. Just my two cents worth.
Best of luck.

Do YOU want to use 6 war flags against teams that very quickly will be 4800tp?

For me that is a very scary part.
I think it makes it so there is a little more separation between players ,but it seems like they’re always has been that.
But I most definitely see your point on this quote.
4800 makes me tremble.

If that Lianna is not maxed, totally possible.
And judging that her perfect shot didn’t take out Ursena even with two defence down, i highly doubt she is maxed.

And if she is not maxed, her tile damage is worse too, explaining why Guinevre didn’t die either.

So you bring a much worse team and almost won.

Lianna is maxed. Her attack was debuffed by kingston.

I don’t blame prophet for embleming his heroes. I’m salty that emblems exist at all. Do YOU want to use 6 war flags against teams that very quickly will be 4800tp? You gonna build 6 teams that can do that?

First, you’re here looking for people to simply tell you that you’re right. You’re not interested in conversation or debate.

Second, there is no “should” about winning.

Third, there’s absolutely no should when the opponent is several hundred tp stronger than your lineup.

Fourth, if you are going to be in an alliance that will face the best, you will have to build those teams. If you don’t want to have to fight 6 opponents like that, don’t go into an elite alliance.