Better read the thread I shared

There are still a few small tweaks that I need to make to Jeeves, but he is now open to the public for adding to your servers. I’d like to thank my entire alliance family of 7 Titans for being patient guinea pigs lol. I couldn’t have done it without them. Once hero cards are up to date, I will be working on multi-server specific issues, including changing the command prefix, update notifications, and better search functions amongst similar heroes.

There is a link to Discord (this is the Apps name) but Discord can be used via computer as well.
You only need an e-mail address.
@Lumi maybe you can share an invitation to your E&P server?

Actually ranvir is worst than wu-kong…

Wu-kong is only good for titans. I don’t recommend him in raids/wars unless your team is really underpowered compared yo the defender.

Wu Kong does not pair well with snipers. They will miss 1/3 of the time which is not good when you are trying to finish off an opponent. Especially one that has just filled its mana.

He is ok with AoE. Even if they miss 1/3 of the time they are hitting 3-4 of 5 opponents for extra damage.

Wu is best suited to tile damage, which is why he works so good for Titans. Stack 4 strong colour plus Wu and then titan damage per tile becomes in the thousands.

Sometimes he causes all misses, sometimes none. Sometimes it’s hard to tell how many hits and misses there are as they overlap.

RGTM. My own term calling the 5 star heroes that provide attack boost. They are short for Ranvir, Guardian Gazelle, Tarlak and Miki. Any one of them is a better version of Wu Kong (though some would say Wu Kong is better than Ranvir but I tend to disagree because Ranvir has better stats, has direct damaging skill, poson immunity, Element Link and highest attack boost at the expense of accuracy penalty, 4 more orbs and six items of 4 star ascension materials). But that’s my term. RGTM.

Wu Kong is nice, but Miki is sooo much better.

Unfortunately… the RGTM mix (as you call them) are not heroes you can just magically summon every day, whereas Wu Kong is entirely possible for every player to have.

If you don’t have the others, you’ll definitely want to have Wu Kong. Total game changer for your titan scores. The miss rate is bad, but the hits more than make up for it.

Also see @Guvnor analysis in Titan Damage Boosters: Miki vs. Tarlak vs. Ranvir vs. Wu Kong vs. Guardian Gazelle where he also takes into attack the damage formula and other factors.

Yeah, it’s definitely higher than that.

I know it’s not exactly considered good overall strategy, but I oftentimes use Wu in my raid attacks. Mostly attacking teams that are much higher TP than mine. If I go mostly rainbow, my regular attacks barely even scratch the opponents. Light up Wu right before setting off a combo, though? Your tiles start ripping through opponents like a hot knife through butter.

Then you consider titan attacks. I’ve seen players on my team whose average attacks before pulling Wu were somewhere around 15k. After pulling and leveling Wu? Their average titan hits nearly doubled.

Yup, I missed the initial 100% starting point. Thanks all for correcting me.

I’ll just go return my bachelor’s degree now, since it’s not in arts.

I’ve been using Wu daily on titans for a year and a half now. Sometimes it is -80, sometimes -100, sometimes 0 misses. It all evens out to roughly 1/3. It is also easy to not notice the hits when they are hidden behind the “MISS” that pops up.

On average, when I first started using Wu my titan hits went from 15k to 23k. Sometimes 8k, sometimes 40k.

You can test his effectiveness by not using him and see if your score drops or not.

are not entirely accurate.

Wu’s impact is much higher than 377:300.
And even though it may sometimes seem like he misses way more than half of his shots? Actual score results seem to prove otherwise.
There is no way that a hero who misses 80% of the time can “magically” nearly double an otherwise relatively mediocre team’s average titan scores over the course of several months. 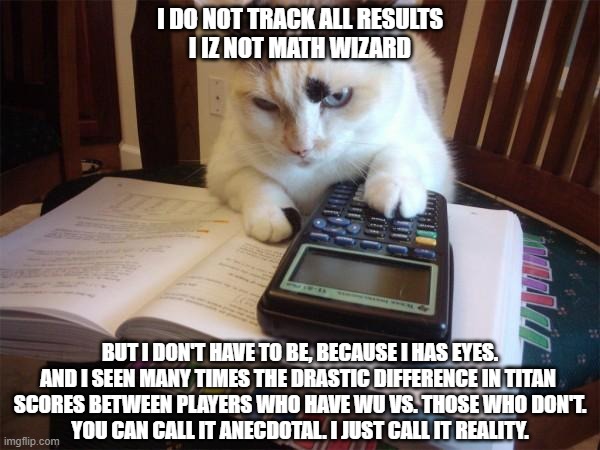 Doesn’t have to be. Even though he got 32% of the questions wrong, he got extra credit for every one he got right, and graduated at the top of his class.

Now you subtract the 32% miss rate from each, meaning you only have a 68% chance to hit.

Even if we assume that what they actually meant was 185% total, even at a 32% chance miss rate, your average attacks will still average 125.8% of the damage vs. normal attacks overall.

If we take the card’s stats literally, +185% means 285% attack. Reduce by the miss rate, average attacks will average 193.8% of the damage vs. normal attacks.

Let’s then just assume, for the sake of argument, that the miss rate is actually higher than the posted 32% rate.

Assuming the extreme and unlikely case that the overall miss rate is actually 80%: well in that case, overall Wu damage would only be 57% of normal damage. And that would certainly suck.

But if that were the actual case? I don’t think anyone would be using Wu at all, ever.

Perhaps I should start a poll, asking everyone who has extensively used a level Wu Kong, to ask whether or not they believe he actually lowers their overall damage? By overall damage, I mean damage numbers spread out over hundreds of battles, not just the one or two unfortunate times where he “seems” to miss every hit.

Away with statistics, let’s go to practice! Doesn’t want to do without Wu Kong! Imagine its spec in combination with combos! To me it feels like he’s a big advantage!

I think he’s worth.

If we take the card’s stats literally, +185% means 285% attack. Reduce by the miss rate, average attacks will average 193.8% of the damage vs. normal attacks.

A tiny correction: It is 193.8% attack, that doesn’t lead to exactly 193.8% damage due to the damage calculation formula.

A tiny correction: It is 193.8% attack, that doesn’t lead to exactly 193.8% damage due to the damage calculation formula.

Fair point… I’m not exactly sure how everything is calculated versus defense levels, buffs, debuffs, etc. etc.; that’s going way too deep down the rabbit hole for me. All I know is that I’ve used Wu Kong enough times to see firsthand how much of an altogether beneficial difference he makes in most battles, in spite of his chance to miss…

PRO TIPS: if you don’t want to risk wasting your special offensive skills, fire them off before activating Wu, just to be on the safe side. Though also keep in mind that Wu’s attack boost can also significantly increase the damage of your attack skills if they do hit… so you kind of have to ask yourself whether or not you’re willing to take a risk of possibly doing no damage versus doing even higher damage.

Also… Wu’s chance to miss does not appear to affect any defensive special skills, such as buffing and/or healing your own team. I could be wrong on that point - but it seems to me that the miss chance only applies to attacks directed at your opponents…

miss chance only applies to attacks directed at your opponents…

Wu Kong is the single most powerful Classic hero in the game. But Wu Kong can be hard to use properly:

Yes, Wu is great for titans I and does a lot of damage. I didn’t mean to disagree overall, just pointing out that +atk% doesn’t equal +dmg%.

if you don’t want to risk wasting your special offensive skills, fire them off before activating Wu, just to be on the safe side

Problem with Wu and Ranvir is, his special lasts 5 turns, while most defense debuffs last 3-4 turns. It has happened that I waited with firing my debuffers until Ranvir’s effect ended and meanwhile they died. Evaluating whether the hero will survive until Ranvirs effect is over takes time, only if it is only a few seconds… titan hits are all about being fast. Especially when you use Wilbur as a debuffer. He gives the whole team protection and therefore it is not always right to wait until the special is over. That’s why I would really like to get Miki, Tarlak or Gazelle.

I was fortunate enough to pull Miki, probably the best overall hero on my entire roster. And he is absolutely awesome.

But Miki is one of those heroes that is locked in a tiny little box in SG HQ somewhere, most players will never have a decent chance to pull him. Whereas Wu Kong is potentially available to every player.

I pulled Wu long before pulling Miki… and I found Wu to be an absolute game changer. Biggest impact was on titans (major increase on my titan scores), but he also improved my raids.

I know, that sounds ridiculous. How could an unreliable 4* hero like Wu make a difference in your raids?

Wu, when charged up at the right time in a raid battle, allowed me to take down teams that I otherwise stood virtually no chance against. That +attack bonus should not be underestimated, as it can make the difference between a likely loss vs. a seemingly unlikely win.