What is the point? Is he useful to have?

Yes…as long you don’t have Ranvir

Because he gives +185% attack, which is damn deadly when the attack doesn’t miss.

I dismissed him initially after seeing that acuraccy debuff, but man, he has saved my bacon more times than I can count, not to mention the (most times) massively increased damage on titans.

Yep he’s fab. In raids or defence he’s good assuming you have heroes in your team that attack your enemies, obvious I know.

It’s because of the -32% accuracy to all allies despite the 185% boost on attack, Wu Kong became obsolete with the arrival of Ranvir, Gazelle, Tarlak, and Miki. He was a superstar then that some players maxed 5 Wu Kongs. He is still good if you don’t have any of the RGTM boosters and in epic tier events.

well, it is a miss chance. by ‘chance’, it means you can miss all of your hits, or kill all enemies at once (by pairing him with aoe hero).

Wu Kong became obsolete with the arrival of Ranvir, Gazelle, Tarlak, and Miki

for me, when things doesnt go right, I can proudly blame Wu Kong for his miss.

for me, when things doesnt go right, I can proudly blame Wu Kong for his miss.

185% attack boost is too high for a mere 4 star hero to wield as a skill. The -32% chance to miss per tile balances the hero and grounded him within the ballpark of 4 star heroes category. Had RGTM didn’t arrive, we may as well see tons of highly emblemed Wu Kong as he is the only viable hero boosting allies’ attacks. I can’t wait to see his costume version though. I wouldn’t be surprised if it will be better than Miki.

I’m finishing my first Wu and using him already for titans, usually in 4-1 stacks. When I get a decent board, he improves my scores by a lot despite misses. When I max him will try in offence, too. So far, very happy with him.

His Miss feels like at least 66%. I prefer gazelle on my sons acct. wu kong is very frustrating. I use for titans but make sure I proc specials I need to hit before wu kong.

I read somewhere on the forum that someone tracked Wu’s misses over an amount of battles and the 32% are accurate. Of course, there are swings and sometimes it feels like he misses all the time.

I have Ranvir but I only use him on titans. I don’t like him on offence or defence, because the miss chance also affects the special skills of his allies…

Who? Could not find heroe in summons portal to check

Rgtm boosters? I don’t get this…
Do you have a link or something on those characters? Can not find I summons portal 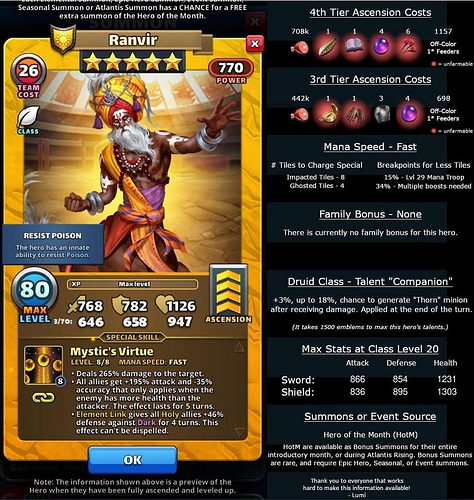 That info next to a picture,may I ask you to share where you have a source from please?

It is from the bot Jeeves on Discord App.

Omg,Ranvir looks so much better than Wu Kong…

Update Well, it's been a few months since the last update, and probably too much coffee late at night. Jeeves is now helping over 30 servers, and continues to get upgraded as I have time. A number of features have been enhanced, but hopefully easier to use, as well. There is now a central !help command, [image] A !settings command for server owners, to tailor Jeeves’ functions on their server, [image] A !list feature, to search for related heroes by various factors, including @DaveCozy’s B…

@Lumi is such a busy bee always spend his free time to keep Jeeves updated. We are all so grateful to have Jeeves in our Discord server.

Could not find this Jeeves not app in Google play store