Is this a bug in raid?

I find it really funny. I had to flee / reroll, of course. 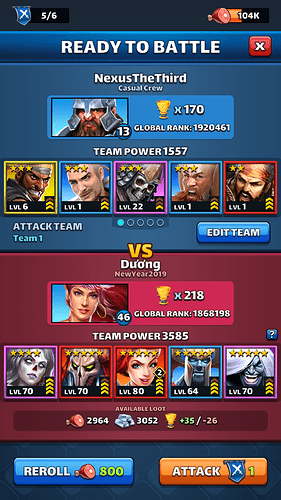 No, that’s a bloody cup dropper.

You’ve been matched by your amount of cups and this guy just returned from dropping with a very weak defense to his normal setup.

Thank you. I believe this should never be possible! This is cheating…

It’s an odd example. Cup droppers usually put up a weak defense but have way more cups than that defense could support. The OP shows the opposite case.

Still, not a bug, but clearly re-rolling is the right call.

What I’m saying is that the devs should make sure such cases never happen. C’mon, look at my level. Even if I would own a bank, I couldn’t really max a 5* team at this level.

What point is there to actively drop your cup score? What advantage does it give a player? And why then revert to a very strong defence team once you have dropped cups. Sorry if that’s a daft question.

The more interesting way is to raid far above your real strength. That will lead to cool defeats as well as to impressing victories. 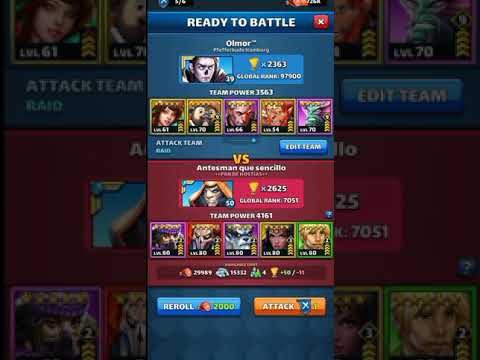 This is one of the reasons that I think cup dropping should be removed. I can only imagine how many new players roll a raid opponent like that, think that’s just how bad the matching system is, and quit before they have any real attachment to the game.

Maybe a system that uses max cups rather than (or in addition to) current cups would help?

Suggest a way to suppress this, which doesn’t harm the whole raiding system.

If you level one hero in each color, and the heroes are good at defense and crummy at attack, you won’t have the offense to win raids. The entire problem stems from the existence of raid chests.

With that system, the lowest opponent you can be matched with will have 75% of your max cup count. For example, if your max cup count is 2400 and you went to the effort of dropping to 0, your lowest-ranked match would still have 1800 cups.

Adjustments to ratios and special cases for newer players could be implemented based on testing, but that’s at least a starting point.

This is one of the reasons that I think cup dropping should be removed. I can only imagine how many new players roll a raid opponent like that, think that’s just how bad the matching system is, and quit before they have any real attachment to the game.

But as I noted above, this matching does not look like cup-dropping. Cup-droppers put up a garbage defense, lose a bunch of raids, then use their best heroes to revenge the weak teams that attacked them.the hallmark of a cup-dropper is having far more trophies than the defense could support, e.g. 2500 cups and a 3* defense.

What we have above is the exact opposite. My guess is that someone put a 5-Aife defense up to drop cups, went on vacation, and found themselves in the basement. They’re now working on rebuilding trophies .