Is Rush War worth the Headache? 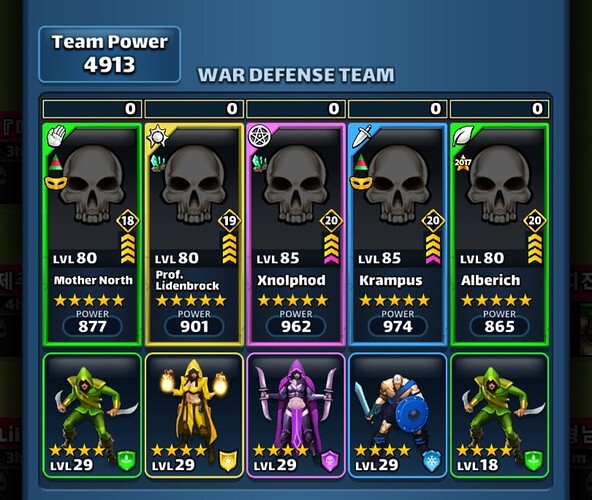 Screenshot_20220109-174405_Empires1080×912 193 KB
My ally is totally fed up. When we get rush war we keep getting this… it takes half a minute to have the effect played and only way to win is having lots of tiles. So less attacks because half of the time is kept by the effects and players that have no other goal than make draws to win. I think that draw should either give points or win for the attacker.

I have 4 choices for you

Not this, otherwise the smart oned would not move the board and make 6/6 AFK attacks.

A different rule as “every hero has X% mana generation boost” would definitely get rid of this cancerous game mode.

No Alfrike Tank.
No damage dealer.

Looks pretty easy for rush. Take 1 healer, 4 heavy hitters including one dispeller, preferable the healer and let’s go. Charge all, don’t use your special before all are full. (only the healer if needed).

When the 2 revivers are dead, just charge again, you have all the time in the world and nothing to fear. Kill one after another when all heroes are charged again.

There are some really nasty rush defenses, this is one only annoying…

That’s still an easy target Tho.
No damage dealer only taunt and heal.

Thing that makes Rush war is so toxic is Alfrike.
That’s it.

I love these war types, when I’m partaking I get a real rush.

It’s mixed for me. I truly enjoy this type of war. But……it is by far the most frustrating aspect of this game. E&P wants to keep players, and I have seen a least one player rage quit due to it. Variety is good but it does test players’s sanity.

I love this war mode…

When you win it’s fun, when you lose it isn’t mwhahahahahah happy Halloween

I would use a hero that prevents healing after lidenbrock used her special.

I’ll take Rush over that awful Field Aid we used to have. I voted Other Changes. I think the mode has potential and can give some heroes who otherwise might not get a lot of use some time to shine. Personally, I don’t benefit much right now because I don’t really have [Very] Slow heroes who become super dangerous in Rush. Some fights as is can be very frustrating, especially when certain heroes are involved that just become massively OP at Very Fast.

Fura would do a decent Job.

Nah. You won’t be able to charge her after Xeno skill, your purple board will be

For me, i will just bring Normal Dispeller like C.Meledor, Frida + Lepus + Magni, and another Healer or just Myst / Proteus.
It’s easy win since they just keep Healing. But with Frida + Lepus and Magni, 6 tiles = one Hero dies. Aim MN then Albi, then it’s just matter of time till i win.

Facing non Alfrike team is about Which Hero to bring facing which Heroes. (If you got at least a decent bench of Heroes) some HOTM resist some ailments are very helpful in some situation, there’s 2 Hotm that resist cut which you can bring against LOL and Neith for example.

But with Alfrike tank, it’s all about your luck in Starting board, apart of Which Hero you bring.

Too many people think they’re supposed to completely defeat the enemy team in war six times. No - that’s great, but that’s not the only goal.

Your ally sucks big time and is impatient to finish the fight therefore gets caught in the limb of healing, mana and taunt. As said just need to get rid of two revivers and you have plenty of ways to do that. Silence, mindless att, cant gain mana, block, dispell, 3hit, elem def down, no healing recieved etc. Always visualise the fight before and are you prepare for tank firing.

Fought a team with both MN and Prof Lidenbrock and we couldn’t kill it in over six attempts. Yes, we had lousy boards and didn’t get more than one match before they went off, but no team should be this ridiculously hard to beat and that’s only because of this stupid format. Just get rid of it. 3* rush tournaments were fun, but now Treevil ruined those, and 5* was already ruined with Alfrike and MN.

Perhaps you need to apply the offensive command rule to the defense teams - the player is obliged to put up six different defense teams and this will add variety to the game, the era of wave tactics will be a thing of the past and one super tank will not be enough for a successful war.

That may be a bit too much, but here are a couple ideas inspired by that:

Basically there are a lot of creative ways possible to improve wars overall (not just Rush).

The 6 defense teams are those 30 heroes that count towards the selection of the opponent. Not too much, because you can bet not only 5 *. The order of appearance is determined by the defender. There will be an opportunity to attack at any time. There will be some justice, cunning (and this is exactly cunning, not tactics) with the participation of weak players along with teams with a strength of 4800 and above, which weakens the overall strength of the belligerent alliance is now very popular. And if you are fighting in an equal alliance, where almost all defense teams have about 4200, then this is a problem, especially in a fast war.

Yes and the chances of getting one will be what?