Is it supposed to be possible to skip a * on titans?

(Images to prove it isn’t a counting problem or misremembering kinda deal: 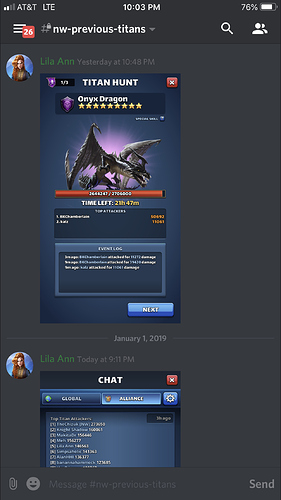 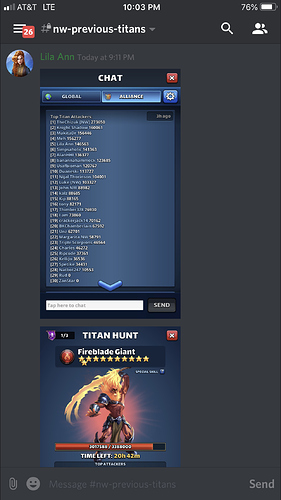 I have once, and I think only once, experienced a star jump after a single titan of the new level in between. But I don’t think I’ve ever seen a skip over a star level completely.

What the hell did you do to that titan to warrant a skip?

Seriously nothing special at all. Killed the 9* with just about 2 hours left… it wasn’t a rare or anything.

Interesting, seems kinda surprising then. I guess it’s on par with stepping up a star level and getting a rare at the same time, which I have seen happen before, even with late kills.

thankfully we have an excellent record keeper

I feel your pain. When we got our first 10*, we were so excited we went all at it and killed it. Next was a rare tiger -11*. What made it worse was this was the bug so it was one shot killed. Next came a 12*. Had to lose a few titans in a row to get us back where we belonged.

@Duaneski
yeah, I can feel your pain.That sure is annoying. There goes a chance for nice titan loot, if you have to let this one go. (And I would certainly advise to let it go)

To my mind, titan stars are also connected to the alliance points. Did you guys and gals happen to do a little just-for-fun run into the top100 in raids?

I was in an alliance once where we regularly did a just-for-fun run into the top100 in raids - and with all these cups, we regularly got high titans as well. (skipped some, too… )

Ahh who knows. Good to know it’s possible though hah

not the alliance, dear. The individual players, in raiding.

To my mind, cups play a role in the * of the titan. Because they count into the alliance points.
When the members have a lot of cups, it is impossible to get titans below a certain number of ** . Unless, of course, it is a new alliance which has to start with baby titans. And even then, a new alliance with a lot of cups goes through the baby titans phase faster, to my mind. Even if they draw out the baby titans, to allow all members to get a bite.

Probably related to this update.

One of the Devs was quoted as:

“Don’t remember when, but added coding so a titan killed ‘very quickly’ the next Titan jumps +1* or more.”

The “or more” was interesting.

Not sure what the formula is. Not sure if formula changed when rare titans added.

But the Devs apparently tinker with Titan algorithm since they want abandoned alliances to be able to form new alliances without substantial penalties.

I think I may have found the relevant lines of code

Don’t remember when, but added coding so a titan killed ‘very quickly’ the next Titan jumps +1* or more.”

There was less than 2 hours remaining when we killed the 9*.

Your alliance is so lucky to have someone who captures all that information for you. She certainly seems like an amazing person who probably deserves some flowers or chocolates or maybe just someone to take out the garbage.

Don’t remember when, but added coding so a titan killed ‘very quickly’ the next Titan jumps +1* or more.”

There was less than 2 hours remaining when we killed the 9*.

Could be the algorithm take into account big hits, to account for Mercs & hopping due to coalitions of alliances.

Did any teammates do a huge percentage of the titan’s Total HP ?

I took first on it but, no flasks used. Just a level up during.

Nope. Chuck did 270,000. But it isn’t at all uncommon to have someone apart from the rest of the group like that.

On Christmas Day One member decided to go flask crazy and had 800,000+ on the Titan. But yeah. Not this time.