Just wondering if anyone thinks Kunchen and Wilbur make her somewhat obsolete? 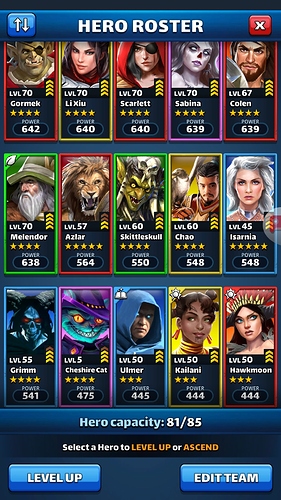 Welk, don’t they say, the best hero is the one you have, not the one you may get?
If Isarnia fires she’s scary! Also, Obakan has messed me up beyond coming back!

Eh i would still like to max isarnia for her tile damage vs titans. She is not a priority right now but i will get around to her when the time is right

I need 5* and have too many mats

What titans are you currently hitting?

Usually 8* is our comfort zone

For what it’s worth i feel like 12* titans should be every alliance’s goals. I never did much mat tracking from titan loot for 10* and under titans. But i can say so far this month i’e recieved 12 unfarmable mats(3 4* mats) from titans over 10*.

For pvp, yea i don’t have any particular use for isarnia though but i also have athena

“A bird in the hand is better than 2 in the bush” level who you have because there is no guarantee you wil get what you want. Even if you spend a ton, nothing is promised.

So obsolete that i’m maxing a second

It is a shame i can’t put them both on flanks defence (with a green tank like Yunan) because too many emblems are needed.
But just try to imagine a defence like that.

One wrong move and i obliterate you

I need 5* and have too many mats

Isarnia was the first bue 5* I leveled up. Meanwhile Isarnia is to slow for me. On most raids the match is often decided, before Isarnia can fire.
When raiding I use Magni. If I need a second blue I take Richard with me.
But: for Titans she is great! So for me she was worth the mats.
If you dont have another 5* blue, take Isarnia. If you want to wait for another hero, level up Grimm

We are siting in a similar boat but unfortunately I am missing 3 warm cloaks.

Right now I am leveling Quintus and Isarnia in their 3rd ascencion. ( My only 2 5* beside Mokk-Arr )
For Quintus I have all the mats for isarnia I am missing the cloaks. I hope they show up soon.

The thing is that Isarnia is blue whereas Wilbur is red and kunchen is purple. So Isarnia isn’t obsolete as she’s a defense debuffer in blue and hits really hard

Good points everyone, thank you. So she’s far from obsolete

IMHO she is one of the most powerful heroes. I wouldn’t hesitate to max her even though she’s slow

She is no way obsolete

I have Mitsuko at tank flanked by Hansel and Eve so I do pretty well against blue but would love to have Isarnia, but would give up 3 Isarnias for the March HOTM.

She surely have fewer effects than newer heroes but her attack score and tile damage makes her still a great hero.

For Obakan you could wait to see v20 before ascending him 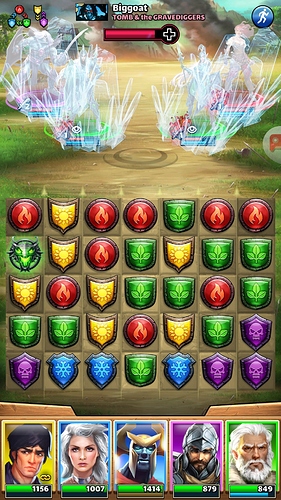 Isarnia is fantastic. So glad I ascended her. She’s given me a viable way to attack blue tanks now by stacking Magni and a green eg. healer

I have no strong greens.