Is Aouda worth leveling?

I like Aouda, and she’s a great counter to all these new 500 Health heroes. I’m just not sure if I should max her. I also have Norns and Sif at 3*70.
I already have Poseidon, Joon, Malosi, Leo, and Onatel maxed.

From my point of view, she is worth levelling. The question is rather if she should be your next 5* Holy to max

If you want to perform better on Mythic Titans, ascend Norns. If you want a hero that helps in wars and raids and also has good defensive value, Sif is great, especially since you already have plenty of snipers.

So overall I agree that maybe she should not be your next Holy to max, but you sure can’t go wrong either if you ascend her

I’d say after both Norns and Sif (or if you’re not big on Norns, then Aouda over Norns) could be given more attention firsthand. HOWEVER, she will definitely hate with certain heroes whose overhealing/boosting HP can sometimes get frustrating to deal with. Off the top of my head, I could see Aouda help knock Baldur back in his place, since I forget he boosts his own max HP by 1000, so she’d practically help bring him back down by half that, if not more.

Sif is the stand out IMO. I’d personally do Aouda over Norns.

I do have Aouda (she’s my only S4 legendary hero).

I do not consider her worth levelling. She is still in the queue, behind my other projects.

Even if my only yellow snipers are C Joon and Uraeus.

I think because she only deals damage and nothing else, her base hit % should be higher. Gefjon is a raw damage dealer - hits 500%; Liana - 512%; C Sartana - 532%. Why is Aouda 450%? It makes no sense. I get she may deal that extra 500 dmg, but that will work only on a target that is already full hp + more… so most likely won’t be enough to 1-shot them. I don’t think this niche and unreliable situation is worth taking her over someone like C Joon who may hit for a bit less dmg, but at least always blinds.

Because Aouda would be completely broken with over 500%. You have to consider the high stats of S4 heroes. Aoudas Attack is crazy and her stats overall way higher than S1. She also hits for 30% more on the first hit. In my opinion she is very strong.

You have to consider the high stats of S4 heroes.

Against which S1 heroes are even worse. I was just comparing…

Even at +16, she hits quite hard. She is not a must have like most snipers, but she does hold her own. And more sturdy than many rogues 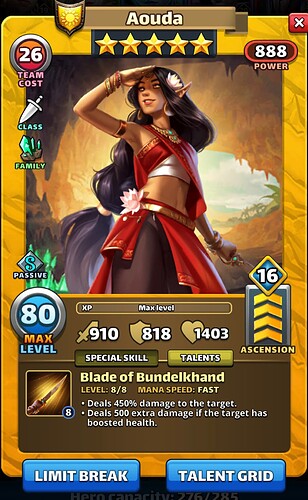