I am a long time player who can see the inevitable coming. Within three weeks, I will be very close to building out the world and will start accumulating iron to such an extent that it will not be spent. I hope that SG can act to prevent this for most of its players.

I have level 20 stronghold, watchtower, iron and food storage, etc. With the double builder and increased iron drops from raid arenas, I am two weeks from maxing out my forges and houses. After that, everything will be maxed except a couple training camps. I do the upgrades on those during challenges because they are constantly used; however if I wanted to they could be maxed as well in a week or two.

Excess iron can go into items as well as buildings. However, I have a lot of those, and the shortages of farming materials make it difficult to generate enough ingredients to make more. This contrasts with food, which may be used to level heroes and (with gems) to increase troop levels. We need a similar outlet for iron. Otherwise, everyone will be constantly carrying large excesses of iron. While I don’t mind donating it to my fellow players via raids, it is not a good idea for everything to be clogged up. There is even a mission for 100 million iron farmed, but that can’t happen if you have no iron storage left.

This issue was present before the double builder was put out. That delayed the iron overload date, but I know I’m not the only one facing this issue. Here are some suggestions of what to do to combat this issue.

Would be good to have a function/building for converting ham to Iron or Iron to ham. Maybe with 2:1 Ratio and will become better with upgrading the building. 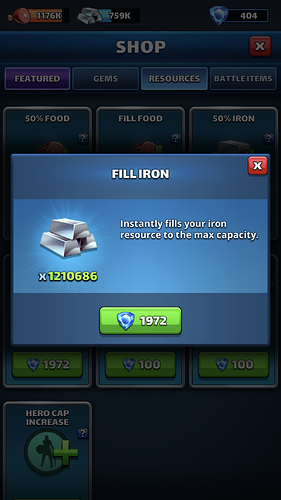 Here’s the top iron use items in your Forge: 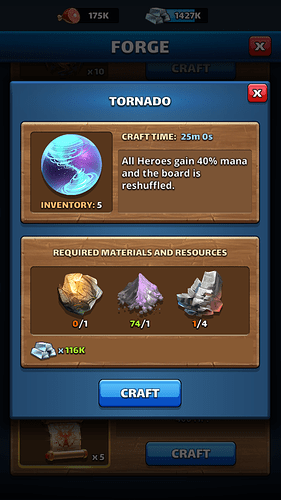 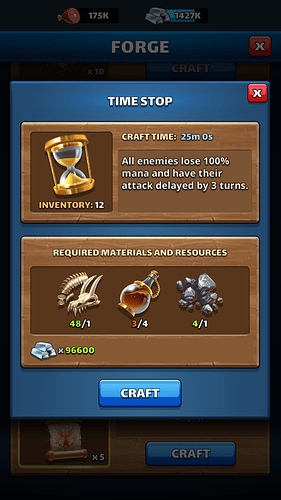 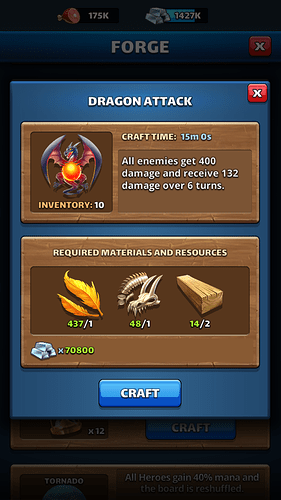 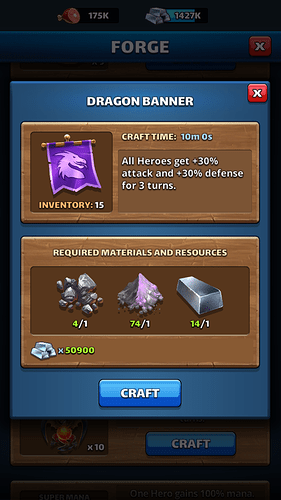 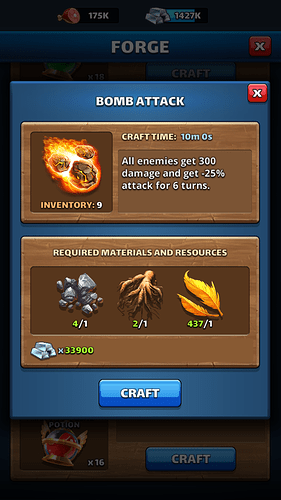 This means you can burn:

I’m not sure how much you farm for the necessary items, but there are certainly ways to burn iron if you want them.

Done that, here is my current stash. I’m building more but am limited by ingredients

Golly gosh and gee! I, er, don’t suppose you’d lend me any of that? Sheesh!

I’ve been storing them for several months in anticipation of a new challenge event. In the meantime I’m doing intermediate so I don’t waste items. One advanced event can burn 100 or more tornadoes

I would love to get more of these but several months ago the ingredients for tornadoes were decreased, likely because the challenge became an item contest as much as a skill challenge

Yeah. As you can see from my pitiful poor collection, I have not been gathering enough.

Wow, I can’t imagine having this many tornados and time stops…I have become a time stop addict and can’t keep them in stock…lol

It’s not enough though.
Having forges and watchtower maxed generates 525k of iron every 24 hours (if I’ve worked it out correctly). Farming for items to forge timestops etc is a slow business, and doing so generates more iron still.
I’m happy for raiders to grab some of my iron if they need it, but I still make way more than I can possibly use.
A method of using excess iron is needed.
(I’m only level 45, I have used 2nd builder sporadically, but every building is now max level apart from one forge at 18, soon to be 20.)

… first ‘forges’ should have read ‘mines’

I’m in the same boat. I figure at some point I will make more iron than I use (I’m already there with food).

Now either SG will come up with a brilliant plan to divest me of all this excess material, or me being loaded and a fat target to Raiders is part of the game ecology, no matter how undesirable it is to me.

I haven’t decided yet which one it will be.

Today I broke no-nugget november and crafted some tornadoes.
If only we could have a reliable source of materials…

I never have a problem with too much food … my troops leveling takes care of that.

I would love to have that problem. Keep it going!

There are rumours of new buildings being introduced soon. I’m not a beta tester, and not incline to add fuel to the speculations, but hopefully that will add some ways to spend iron. I’m in the same situation myself: my only building left to improve are a couple forges (including one masquarading as barracks) and iron mines, which won’t help much.

Tips to get those 30 gems from the mission: raid and farm with your iron stores full. Wait until your mines are overflowing, forge the right amount of items, repeat.

Perhaps they could just move the building cap up to 25 or something.

Only if you are fighting titans at a high level.

Also, you will run out of key ingredients such as dragon bones or nuggets in that same short period.

Ask me how I know.

(I’m out of nuggets now. Those little blighters are harder to find than the four-leaf clover! Still have Dragon bones though.)